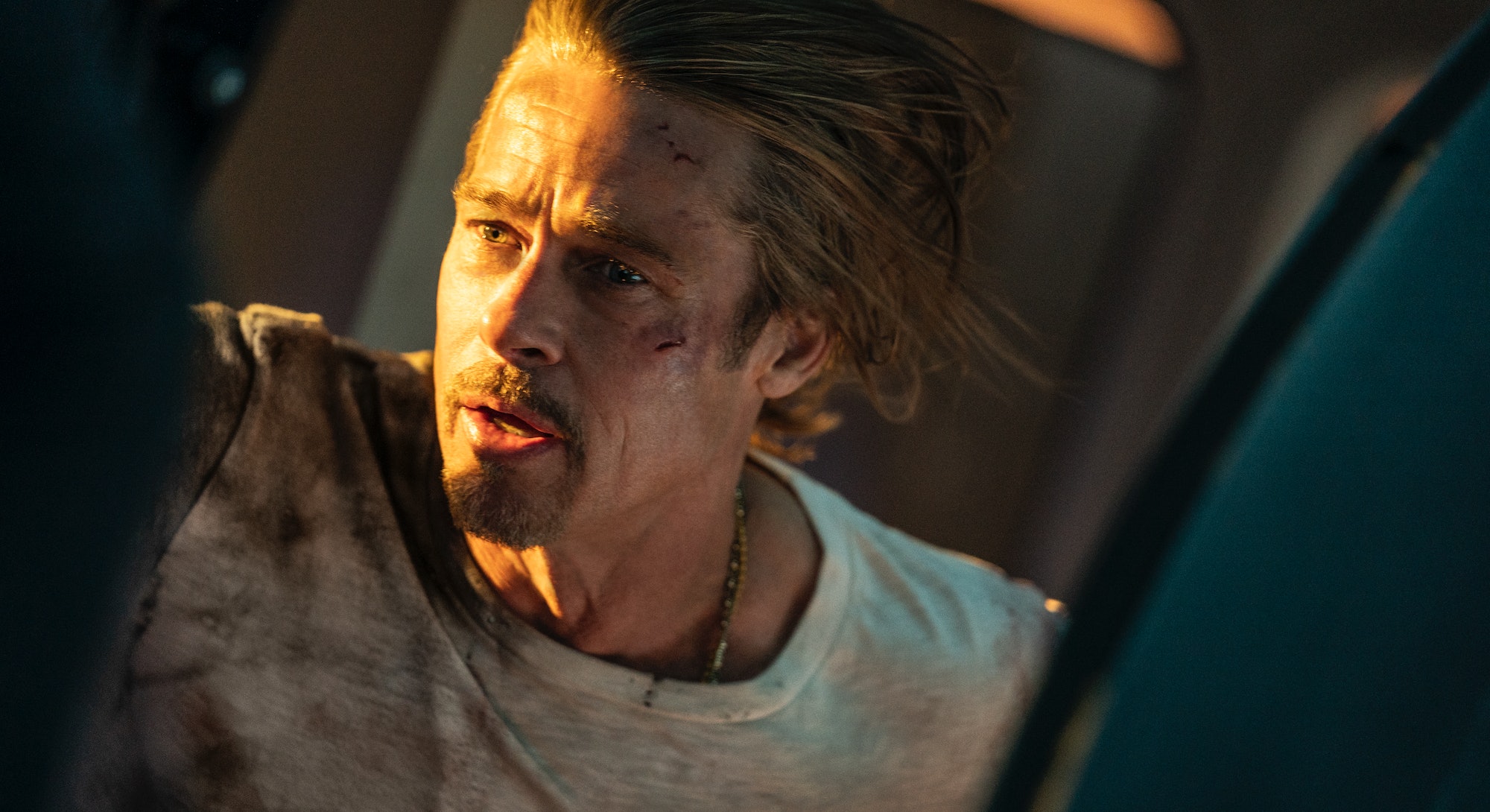 Smooth, reliable, and efficient cross-country transit exists in most developed parts of the world. But only in America can it feel like a bumpy ride.

Bullet Train, an adaptation of the Japanese novel Maria Beetle by Kōtarō Isaka from John Wick co-director David Leitch, is what you get when you take an already pulsating thriller about assassins on a train and overblow it with hundreds of millions of dollars in visual effects, A-list actors, gratuitous cameos, and a meandering plot that doesn’t know how to stay on course.

While Bullet Train’s basic premise is a recipe for fun and does succeed in entertaining with pleasing action choreography, it’s never as clever as it thinks it is nor as exhilarating as it ought to be. Along with Hollywood’s unceasing fetish for Asian settings as one-dimensional amusement parks of neon lights, yakuza, anime mascots, and karaoke pop hits, and Bullet Train can feel more regressive than its playfulness implies. That the movie just doesn’t ever sing is perhaps its gravest offense.

In theaters August 5, Bullet Train isn’t complicated even with its overcooked plotting and pale imitations of Quentin Tarantino and Edgar Wright’s styles. On a high speed train through Japan — a rich culture and geography distilled to CGI mountains and neighborhoods built exclusively to be wrecked — a cadre of killers, criminals, and other seedy figures collide with conflicting goals. Chief of them is Ladybug, an American assassin (Brad Pitt) who wants an “easy” gig for once.

Standing in the way of his simple task — stealing a briefcase — are self-serving villains ripped from graphic novels. There’s vindictive cartel hitman Wolf (Bad Bunny), poison user Hornet (Zazie Beetz in a glorified cameo), and a deceptive schoolgirl nicknamed The Prince who, despite the efforts of Netflix star Joey King, is underdeveloped as the “lolita femme fatale” the film wants her to be. There’s also two British gangsters, brothers Lemon (Aaron Taylor-Johnson) and Tangerine (Brian Tyree Henry). The latter has an academic obsession with the Thomas the Tank Engine, and it is bizarrely one of the movie’s strongest narrative through-lines.

Balancing out the film’s cast of unlikable Westerners are Japanese heavyweight Hiroyuki Sanada and British-Japanese actor Andrew Koji (Warrior), as a father and son with deep ties to the movie’s bigger picture plot. There’s a semblance of a good movie when these two share the screen; both have proven potential for range that could truly amaze audiences, given the right material and care. But Hollywood is too obsessed with putting samurai swords in their hands right now. That Bullet Train’s marketing undersold both of them, who to be clear are as involved as their American co-stars, is bad optics on top of the film’s painfully trite vision of Japan.

There are times when Bullet Train is a gas, and it’s more times than I’d like to admit. These actors are clearly having fun and that radiates through the screen. The action, too, is comic book-y in its dynamic framing and kinetic pacing. Leitch, who with Chad Stahelski made John Wick the stone cold classic it is, proves here he is a skilled set piece director at heart. The narrow confines of the titular bullet train and its many functional cars provide plenty of visual pizazz. But it can feel like the whole script exists to provide context for the choreography — as if we really need to care about these awful human beings to be excited by their attempts to stab their eyeballs with chopsticks.

It’s been a long time since stunt studio 87eleven’s action design truly dazzled, and while the athleticism of Bullet Train isn’t all that, each scene’s individual stipulations are spicy. It’s only when the train itself starts to fall apart — and the movie’s VFX budget kicks in — that Bullet Train contorts itself into a Marvel-esque climax that’s weightless, inauthentic, deafeningly loud.

In the five years since Scarlett Johansson’s yellowface in Ghost in the Shell, there was cautiously optimistic hope Hollywood was done with its exoticizing and whitewashing of Asian stories. Bullet Train is tragic evidence that Hollywood can and will regress if audiences aren’t vigilant enough. (Isaka has said he embraces Bullet Train’s diversity, as do most audiences in Asia who enjoy their own domestic film industry and go to Hollywood for the spectacle of foreigners.) But it’s not that Bullet Train is ever offensive; the most politically incorrect the movie gets is Brad Pitt’s American quipping “I thought they bowed here.” Pretty much every nationality onscreen is exaggerated with cartoonish proportions. Bullet Train is clumsy, but it is strangely equitable.

Bullet Train isn’t terribly fresh either, and that’s its problem. Its whole look is derivative of other, better movies, a copy-and-paste fever dream of everything already seen from Blade Runner to Detective Pikachu. At least the Pokémon movie had gravitas.

In one lengthy scene, Brad Pitt is deeply fascinated with an automatic toilet. Whether it speaks to America’s inability to properly invest in infrastructure or the filmmakers bullying audiences to the cinematic equivalent of a swirly is unclear. It could be both, and either way, you have the unshakably gross feeling of toilet water in your face.

There are worse movies than Bullet Train. But you can and should seek out better movies, too. The movie’s alluring Asian talent are ones to watch, including Yoshi Sudarso, whose brief performance as a young Hiroyuki Sanada is more engaging than half the film’s starry ensemble. Other established Japanese-American talent like Masi Oka and Karen Fukuhara, who is a legit force of nature on The Boys, are maddeningly underutilized as basically extras. In the future, I hope, they’ll all have meatier roles than here in Bullet Train, where they play second fiddle to the movie’s nihilistic and destructive Western characters.

For a movie propelled by forward movement, Bullet Train doesn’t get far. Despite its mischievous sensibilities and sometimes lively direction, Bullet Train doesn’t make the destination its ambitions intend. What could and should have been a taut, star-studded thriller about killers in an inescapable scenario is instead a cranked-up blockbuster with passive, unlikable characters, tired design, and dated style. Yeah, you could turn off your brain and enjoy the ride. But where is that really getting you?