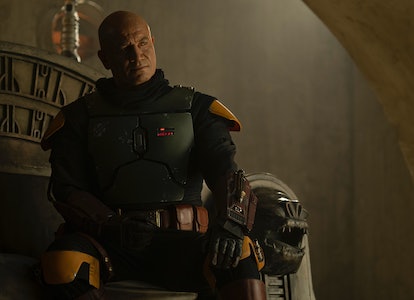 The Book of Boba Fett isn’t the only Star Wars show expected to premiere on Disney+ this year. Obi-Wan Kenobi has been one of Lucasfilm’s most hotly anticipated projects ever since it was announced, which is why so many fans were surprised by the studio’s decision to prioritize Boba Fett.

However, two episodes into Boba Fett, it’s becoming clear why it not only premiered before Obi-Wan Kenobi, but why it’s the perfect show to precede Lucasfilm’s next Disney+ series.

Touring Through Tatooine — The Book of Boba Fett follows the former bounty hunter (Temuera Morrison) as he sets out to become the new crime kingpin of Tatooine. As a result, the series is exploring the well-known desert planet in a way that no other Star Wars movie or TV series really has before.

Across just its first two episodes, The Book of Boba Fett has spent considerable time in various plateaus, cities, and formidable Tusken Raider camps. All signs indicate that the series’ explorations of Tatooine won’t stop anytime soon, which means it’ll likely paint the clearest picture to date of Star Wars’ most recognizable planet.

That’s important, considering Obi-Wan Kenobi is also expected to spend quite a bit of time on Tatooine.

Obi-Wan’s Exile — Not a lot is known yet about Obi-Wan Kenobi, but we do know that the Disney+ series will be set in the years between Revenge of the Sith and A New Hope when the Jedi (played by Ewan McGregor) is living in hiding on Tatooine. While there’s a chance the series will venture off the planet at various points, Tatooine is expected to serve as the central location.

But thanks to Boba Fett’s exploration of Tatooine, Obi-Wan Kenobi won’t have to worry about explaining the planet’s culture, power structure, or even the differences between certain Tusken Raider tribes.

In fact, even though the two shows take place during very different periods in Star Wars history, Obi-Wan Kenobi has the chance to use some of the Tatooine lore that’s being established in The Book of Boba Fett. If it does, the studio can avoid filling Obi-Wan Kenobi with the kind of clunky exposition it otherwise would have needed to make time for.

The Inverse Analysis — As Lucasfilm’s second live-action Disney+ series, The Book of Boba Fett is picking up where The Mandalorian left off. Over the course of its first two episodes, the series has filled in some important blanks in Star Wars history and has spotlighted characters and places that the franchise’s previous entries haven’t had the chance to.

And while the series is entertaining in its own right, The Book of Boba Fett is also helping to bridge some of the gaps between Lucasfilm’s existing and upcoming Disney+ titles, especially Obi-Wan Kenobi.

The Book of Boba Fett is streaming now on Disney+.