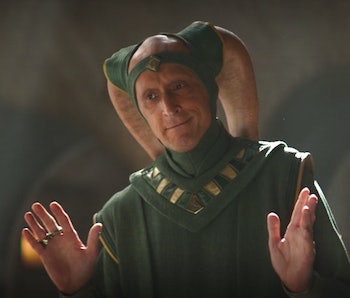 The Mandalorian was never afraid to sneak a clever cameo into an important scene, and it looks like The Book of Boba Fett is no different. In arguably the most crucial (if understated) moment of the Episode 1 premiere, fans of HBO’s Veep were treated to a surprise. But David Pasquesi’s role as “majordomo” (aka, the mayor’s representative) reveals more than you think about the new Star Wars series.

Warning! Spoilers for The Book of Boba Fett Episode 1 ahead.

Who is David Pasquesi in Book of Boba Fett?

Pasquesi plays the majordomo, a real term that equates to “chief of the house” and basically translates to chief-of-staff. He shows up in the place of his boss to pay tribute to Tatooine’s newest crime lord, Boba Fett. Except, that’s not exactly how things go down.

Pasquesi’s majordomo isn’t there to pay tribute, he’s actually visiting Boba Fett to demand a tribute of his own. Clearly, the mayor isn’t ready to bend the knee and instead sees this as an opportunity to impose his own will. Boba refuses, and Pasquesi leaves with a warning that we haven’t heard the last of this mayor.

Beyond setting up a new conflict, the majordomo plays a key role in establishing the tone of The Book of Boba Fett. Despite being a direct sequel to The Mandalorian, this new Star Wars show couldn’t be farther from that space western in style and tone. Boba wants to rule through respect and diplomacy. He’s no longer a shoot-first-questions-later kind of guy, and that means lots of icy conversations like the one between him at Pasquesi.

As the series progresses, we can expect to see a lot more of this sort of Jabba’s Palace intrigue. The Star Wars universe is going from the furthest outskirts of the galaxy to something that’s still on the periphery but feels a little more central. There’s power to be had on Tattoine, and Boba Fett will need more than just brute strength to hold onto it.

But wait, who is David Pasquesi?

If you’re wondering about this familiar-looking actor, we’ve got you covered. David Pasquesi has appeared in lots of memorable shows and movies, though he’s never quite had that breakout moment. You might recognize him from Veep, where he played Selena Meyers’ ex-husband Andrew. He’s also had small roles on Empire, Strangers with Candy, Curb Your Enthusiasm, and Groundhog Day (among others). And h notably played Blaise St. John in Lodge 49 on AMC.

Will The Book of Boba Fett go down as Pasquesi’s most notable performance to date? It’s too soon to tell, but he’s already done a lot to set the tone for this exciting new Star Wars show.

The Book of Boba Fett is streaming now on Disney+.