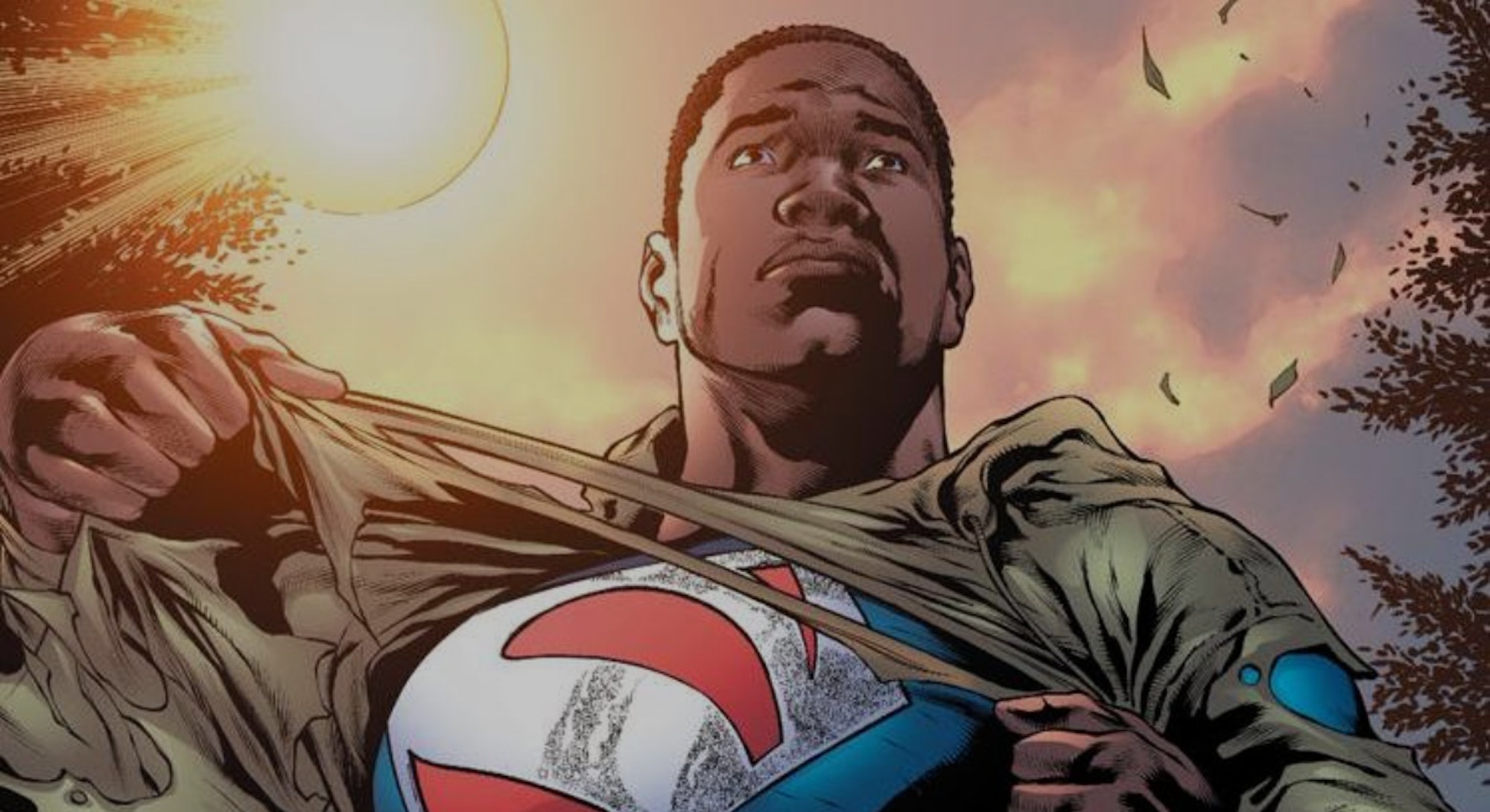 If you’re a Black person with a vested interest in the world of superheroes and comic books, chances are you’ve felt like an alien at one point or another.

While Marvel and DC have continued to make strides towards centering diverse storytelling and giving creators of color the chance to play around in their galactic sandboxes, there’s still an aura of otherness surrounding comic book characters who aren’t white. Since its inception, the comics industry has catered towards a largely white male audience, and this is visible in the representation that superheroes receive on the page and on screen.

Despite recent, resounding successes like Black Panther and Into the Spider-Verse, it’s undeniable that most of Marvel and DC’s heaviest hitters are white men — and if your favorite character happens to be one of a few popular heroes of color, their adventures come at the expense of their own justification.

Marvel’s Shang-Chi had to survive being framed a theatrical “experiment” to earn its flowers, and it took nearly 25 years for DC Comics to revive the Milestone Universe and celebrate its incredibly diverse roster. For years, comics have shown people of color that, even though they acknowledge their presence, that acknowledgment is conditional.

And yet, in spite of all of this, I’m still visiting shops every two weeks, picking up my monthly pull list, and dropping in to check on my favorite titles. Throughout the pantheon of comic book heroes, there are dozens of radically unique and layered characters, each with varying combinations of powers and problems. But there’s still nothing that puts me more at ease than the iconography of the S-shield and that flowing red cape.

Superman was the blueprint. Even without being the first, he laid the groundwork for generations of heroes to come, and over the course of the last 83 years, he’s become one of the most recognizable cultural deities in contemporary human history. It could be the powers or the stories, but what drives Superman’s continued popularity is what he represents: the collective force of raw optimism.

“A bold and audacious idea.”

In the wider framework of the DC Universe, Superman is a fixed point; a fundamental force of good standing diametrically opposed to the chaos and entropy constantly pressing up against the DC multiverse. In Grant Morrison’s cosmic and metatextual 2008 superhero epic Final Crisis, Darkseid’s destruction of the multiverse is halted by Superman using his dying breath to sing — everything about Kal-El is so antithetical to the concept of evil that even his voice counters Darkseid’s vibrational frequency.

Superman’s unwavering moral fiber and absolute belief in the power of hope is his defining trait, and shockingly, within the next few years, that righteous icon will be played by a Black actor for the first time in cinematic history. But announcing a Black Superman and making good on that promise are two different things, and while DC has plenty of options, they all come with their own advantages and potential pitfalls.

In October 2021, Inverse is rethinking superheroes with a series of articles, essays, interviews, and more. Welcome to the Superhero Issue.

In February 2021, Warner Brothers made a stunning announcement: J.J. Abrams will produce a Superman film written by acclaimed cultural critic and author Ta-Nehisi Coates with the intention of casting the Man of Steel as a Black man. Coates is no stranger to the world of comics, having recently wrapped up an operatic run on Marvel’s Black Panther before moving on to redefine Captain America in a time where American ideals are more divisive than ever.

Despite the fact that neither plot details nor potential director options have been discussed, the thought of filling the shoes of one of the most recognizable heroes of all time with a Black actor is a bold and audacious idea, one that comes with a lot of inherently baked-in social relevance.

Naturally, the internet lost its collective mind. For anyone who’s been trapped in the Phantom Zone for the last three years, Warner’s relationship with the DC Comics fanbase is in a decidedly precarious situation, as a result of the company’s falling out with Zack Snyder and the untimely demise of his burgeoning Justice League saga.

Henry Cavill’s Superman, while divisive amongst general audiences, has been embraced by the niche of Snyder’s passionate fanbase, and the long-awaited release of the mythic Snyder Cut has not tempered those flames. To many people, casting a new Superman feels akin to a betrayal, as Cavill’s time with the character has been plagued by studio interference and a general reluctance to indulge what many feel like is a unique and valid interpretation of the character.

“Multiple Black characters have taken up the Superman mantle before.”

But beyond that, the positioning of the announcement is haunted by the specter of serious allegations of racism levied by Ray Fisher against Warner Bros. executives during the reshoots of Justice League’s theatrical cut. While the entire cast and crew were subject to the allegedly abusive behavior of surrogate director Joss Whedon, it was Fisher who experienced months of gaslighting at the hands of Walter Hamada, the sitting President of DC Films, as well as the former CCO of DC Entertainment, Geoff Johns.

Much of the conversation surrounding this movie has pointed out the unsavory optics of championing on-screen diversity while at the same time undermining the efforts of real Black people to seek justice for what certainly looks like racial discrimination.

There’s a troubling, even Gordian paradox at the heart of Warner’s historic venture. How can a studio that struggled to make Superman relevant on-screen for the last 15 years be trusted to balance all of the genuine criticisms levied against it while also delivering a next stage of Superman that can be socially and culturally moving? How does one take a controversial premise and make it successful while also pleasing fans of a character who’s existed for eight decades?

Luckily, the idea of a Black Superman has precedent in the comics, thanks to the quantum vehicle of the multiverse. While multiple Black characters have taken up the Superman mantle, the two with the most concrete lock on the title both made their debuts in the last 15 years: Val-Zod and Calvin Ellis.

“When you’re staving off a Crisis every week, there isn’t really time for socio-political soul searching.”

Val-Zod is a relic of The New 52, a company-wide relaunch by DC that sought to engage new readers and revitalize the comic book industry back in 2011. While its successes and failings are up for debate, one thing it did do was introduce the world to Earth 2, an adjacent universe to the canon Prime Earth. In this universe, Superman, Batman, and Wonder Woman are annihilated during an invasion by Darkseid, and the only heroes left are outclassed underdogs who struggle to fight back against the Anti-Life despot.

Another survivor of Krypton’s destruction, Val was taken in by a United States scientist upon arriving on Earth 2, where he was unknowingly manipulated into terraforming the Earth into a suitable vessel for Darkseid’s forces. This left him guilty and insecure about his place in the world. Unlike Clark, this Superman was an outsider in every sense of the word, making it that much more engaging when he ultimately decided to take a stand against the evil besieging the planet.

Calvin Ellis, on the other hand, has been around since his introduction in 2008’s Final Crisis, where his help was needed to combat the multiversal decay that is Darkseid. While Calvin’s backstory is very similar to Clark Kent’s, there are two big differences:

Calvin’s creator Grant Morrison admitted to modeling him after President Barack Obama, and it’s hard to deny that there’s a strong central conflict to a universe in which Superman is the president — is the red tape of bureaucracy an asset or a detriment to the Man of Tomorrow?

In the comics, neither character’s race is explored in a truly topical way, but when you’re staving off a Crisis every week, there isn’t really time for socio-political soul searching. But in live-action, Ta-Nehisi Coates and the film’s director (whoever that might be) will have time to explore the nuance of Blackness in a much more effective way. Both Calvin and Val have the potential to intersect with the Black experience in radically different contexts.

As the successor to his Earth’s late Clark Kent, Val-Zod could explore similar themes to Marvel’s Falcon and Winter Soldier — notably, what would the world’s reaction be to a Black man embodying a symbol that has traditionally fought for truth, justice, and the American Way? That’s not to mention the added conflict of Val choosing to be a pacifist, and his general unfamiliarity with humankind.

Calvin Ellis, on the other hand, did grow up among humans, and now he’s the President of the United States, a job title with a tax bracket and social position that separates him from a good 90% of the nation’s population. He wants to save the world, he’s Superman, but how well does he really know the people that he’s saving?

But alongside the unique opportunities presented by both Calvin and Val’s stories, there’s another option that presents its own set of questions: what if Clark Kent himself was a Black man?

What if Clark Kent Was Black?

There’s an everyman quality to Clark Kent that his successors lack. Val is an alien first, and Calvin is the president. Clark isn’t your everyday human, but he desperately wants to be, and although his version of Superman carries all the power in the world, he’s still forced to fly and fight with restraint in most situations.

Similarly, despite the righteous anger they feel at structures responsible for and upholding injustice, Black people are forced to hide that rage on a daily basis, lest we come across as menacing or bitter. Clark Kent is a man who wants nothing more than to be treated like everyone else, even though he occupies a space in a world that was never truly meant for him.

“Black people are forced to hide that rage on a daily basis.”

Warner Bros. and its filmmakers have a long road ahead, but the Black Superman paradox isn’t unsolvable. Superman is one of the most popular fictional characters of all time for a reason, and it isn’t that difficult to understand why: he’s fun.

Watching Superman save the world inspires us. For two hours or twenty minutes, we can believe in someone who wants nothing more than to do good and help others do the same. While it’s important to convey a socially meaningful theme to go along with the historical weight of what this movie intends to do, it’s also important to give fans what they’ve always wanted from a good Superman movie: make it exciting, make it heartfelt, pit him against a genuine physical threat, and couple that with the philosophical questions that Superman has always been forced to answer.

Most importantly, never forget that you’re making a Superman film. Although he was raised as a white dude in Kansas, Superman is the intergalactic immigrant brainchild of two bright-eyed Jewish young men. Despite comic books being made largely for and by white males, Superman’s message of unwavering optimism reaches everyone, and can speak to marginalized people across the globe.

Even though Calvin Ellis, Val-Zod, and Clark Kent all come from radically different circumstances, their stories are the same. Cut off from their heritage and placed in a world that can be alienating, corrupt, and hostile, each of them fights for a better tomorrow because they know it’s possible. Believing in a brighter future, no matter the odds, is part of the Black experience as well. It’s an ideal that every person can embody — and it’s fundamentally the crux of who Superman is and will always be.

The Inverse Superhero Issue challenges the most dominant idea in our culture today.