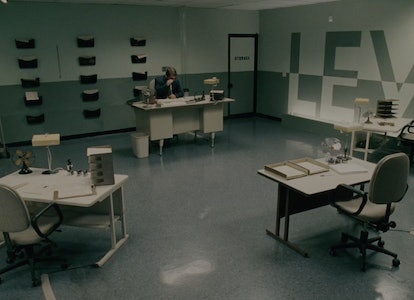 The Jeffers Corporation is “the largest and friendliest and most profitable corporation in the history of mankind,” at least according to a booming, disembodied voice that presides over the company’s employees in Jared Drake’s deadpan 2008 science fiction dark comedy, Visioneers.

Wall-E might be the better known dystopian comedy of 2008, but this Zach Galifianakis-led movie deserves a closer look. Lucky for you, Visioneers is streaming for free online right now. Here's why it's worth checking out.

The Jeffers Corporation is one of those familiar dystopian companies that does everything and nothing, employing millions of people and dominating Visioneers’ retro-futuristic society. George Washington Winsterhammerman (Galifianakis) is a “level three tunt” at Jeffers, which means that he sits at a desk and processes forms all day, overseeing other employees who do the exact same thing from their slightly smaller desks.

George is outwardly successful by the warped standards of his society: his job at Jeffers, his 1980s-era minivan, his massive house, and his devoted wife, Michelle (Judy Greer), who sits at home all day watching perky talk show host Sahra (Missi Pyle). But George lives a life of quiet desperation, constantly in fear of exploding.

That fear is literal. In Visioneers, the United States is plagued by an epidemic of spontaneous explosions, which has claimed more than 100,000 victims thus far. “Mike won’t be in today. Apparently, he exploded last night,” George is dryly informed by his supervisor, Charisma (Mía Maestro), notifying him that he’ll soon have a new employee to replace the departed co-worker — and, of course, he’ll have to process the requisite form.

George nurses a crush on Charisma, whom he’s never met and who attaches little smiley face notes to the forms she sends him every day. That yearning for emotional connection is surprisingly poignant in Visioneers, which, on the surface, is a silly comedy about a surreal, absurdist future.

Galifianakis is remarkably subdued as George, a straight man observing ridiculous behavior around him. When he finally erupts in fury or passion, it makes a real impact. Those bottled-up feelings put George at risk of exploding, although no one seems to know exactly what causes the phenomenon.

“Victim suffered from dreams,” reads the onscreen text of a news report about the latest person to explode. George, too, suffers from dreams, something that’s uncommon in his society. He dreams that he’s the actual George Washington, fighting in the Revolutionary War, which gives Visioneers the welcome chance to put Galifianakis in a powdered wig.

George’s dreams show his yearning to do something valuable and important, but such feelings are discouraged by the Jeffers Corporation, which sends him for a medical evaluation. “Your brain scans came back negative,” the doctor tells him, whatever that means. Eventually, the company starts manufacturing “inhibitors” that suppress all negative emotions as a way to prevent people from exploding.

A society that discourages the act of dreaming, full of citizens so repressed that they physically explode, could make for a blunt, heavy-handed story about totalitarianism, but Drake and his screenwriter brother Brandon maintain the movie’s sense of humor for its entire running time.

They only come close to sentimentality when George finally meets Charisma in person after she’s been fired from the Jeffers Corporation and is living in a folksy small town-style region labeled Undeveloped Area 37. Charisma is more of a symbol than a character, but Maestro gives her a level of pathos that makes her more than just a lust object for George, who is unable to perform in bed with Michelle.

Judy Greer digs even deeper with Michelle, a character who could easily be reduced to a representation of the soulless conformity George longs to escape. Michelle’s obsession with a self-help book peddled on TV turns into anguish when she discovers the book’s messages are meaningless, and Greer matches Galifianakis in expressing frustration and discontent with the roles society has given them to play. The TV personalities who represent mindless distractions for the masses eventually succumb to ennui themselves, and Pyle brings a manic energy to Sahra, even while appearing only in a handful of TV clips.

The Jeffers Corporation may be recognizable from any number of dystopian satires, but the Drakes add plenty of oddball details in the margins that make Visioneers distinctive. George’s home life is like a nightmarish distortion of a sitcom, with an unseen son who never speaks and never leaves his bedroom and a brother (James Le Gros) who gives up his cushy Jeffers job to pursue his love of pole vaulting. He lives in George’s pool house and sets up a pole vault course in the backyard, where he soon attracts a sort of hippie-style commune of followers. Even that can’t heal the emptiness inside him, though. “None of them care about pole vaulting, or dreams,” he laments to George about his flock.

It’s a goofy line, but Le Gros infuses it with as much melancholy as humor, and that extends to the movie as a whole. It’s funny when characters greet each other with an extended middle finger and a wish of “Jeffers morning,” but those small recurring jokes add up to an immersive, unique world. The Drakes pull that off on a tiny budget, mostly using the existing environment, along with committed performances and clever writing, to make the plight of George Washington Winsterhammerman, level three tunt, weirdly compelling.

Visoneers is streaming now for free on Hoopla, the Roku Channel, Tubi, and Vudu in the U.S.

More like this
Entertainment
8.3.2022 4:17 PM
Prey is an old school throwback that brings new life to the Predator series
By Eric Francisco
Culture
8.12.2022 11:30 AM
You need to watch the most awe-inspiring sci-fi epic on HBO Max ASAP
By David Grossman
Culture
8.2.2022 9:00 AM
7 incredible sci-fi shows and movies coming to Netflix in August 2022
By Robin Bea
Related Tags
Share: