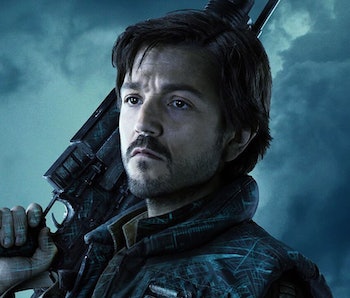 Andor will take Star Wars fans back to the age of the Empire. The Disney+ series is set to take place prior to the events of 2016’s Rogue One: A Star Wars Story and will follow Cassian Andor (Diego Luna) as he becomes increasingly involved in the efforts of the growing Rebel Alliance. Created by Michael Clayton director Tony Gilroy, the series has been described as a “spy thriller” set during one of the darkest periods of the Star Wars universe.

That may not come as much of a surprise considering the tone and style of Andor’s parent film. That said, it sounds like Andor will be tapping into many of the same themes Rogue One did, including the Star Wars detail that it communicated better than any other film or TV show to date.

A Time of Fear — While speaking with Vanity Fair, Diego Luna teased that Andor is about “the journey of a migrant,” saying, “That feeling of having to move is behind this story, very profoundly and very strong. That shapes you as a person. It defines you in many ways, and what you are willing to do.” Building off Luna’s comments, Gilroy said that Andor’s first season is about its hero being “really revolution-averse, and cynical, and lost, and kind of a mess.”

Over the course of the series, Cassian will gradually grow into the same devoted rebel fans met in Rogue One. “[Cassian’s] adopted home will become the base of our whole first season, and we watch that place become radicalized,” Gilroy teased. “Then we see another planet that’s completely taken apart in a colonial kind of way. The Empire is expanding rapidly. They’re wiping out anybody who’s in their way.”

Becoming a Rebel — Together, Gilroy and Luna’s comments paint Andor as a story about the beginnings of a revolution. However, Gilroy’s comment about the Empire’s rapid expansion and habit of ripping apart planets in “a colonial kind of way” also makes it clear that Andor will focus heavily on what it’s like to live under the fist of a ruthless regime. While that doesn’t mean anything good for the show’s characters, it’s an exciting approach for Andor to take with its story.

After all, one of the best things about Rogue One was how clearly it showed how afraid everyone in the galaxy was of fighting against the Empire. The film’s emphasis on Imperial Star Destroyers floating above cities and planets visually reinforced the Empire’s hold over the galaxy, but it was the fear and anxiety present in characters like Luna’s Cassian and Riz Ahmed’s Bodhi that truly sold just how dangerous it was for any to try and make moves against the Empire.

Rogue One’s focus on the Rebellion’s actual soldiers made the danger of the organization’s conflict with the Empire palpable in a way that no Star Wars movie ever really had before. Now, it looks like Andor may manage to do the same.

The Inverse Analysis — There are moments in Rogue One: A Star Wars Story when it feels very much like the “spy thriller” that Andor is said to be. The film’s third act, meanwhile, alternates between feeling like a heist and a space opera. But at the end of the day, despite all of its various genre influences, Rogue One is still a grand, sci-fi space epic.

Andor, however, doesn’t have to tell a story as massive as Rogue One. As a result, the Disney+ series will have a chance to double down on many of Rogue One’s darker moments. Based on Gilroy and Luna’s comments, it sounds like it’ll do just that, which means the Empire may end up feeling more dangerous in Andor than it ever has before.

Andor is expected to premiere on Disney+ in late summer 2022.

Inverse may receive a portion of sales if you subscribe to Disney+ through the link.