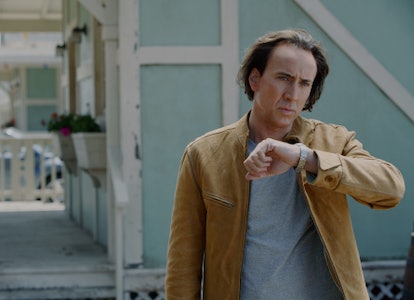 When Iron Man came out in 2008, the world of action movies would be changed for the next decade and counting. Superhero stories would rise up to become one of the genre’s most dominant performers, breaking box office numbers regularly. What did these movies replace?

What did we lose when we gained the Marvel Cinematic Universe?

The 2007 sci-fi action movie Next, starring Nicolas Cage and Jessica Biel, offers a few clues. Some of them are fun, others show how the MCU was able to sweep up the competition.

Next was part of a recurring trend of the 2000s: adapting the work of Phillip K. Dick. It started in 2002’s Minority Report and offered seemingly endless potential source material. The famously proficient Dick wrote 44 novels and 121 short stories before dying in 1982. These stories run the gamut from alternate histories like The Man in the High Castle to far-out future with aliens and robots.

“The Golden Man,” which Next is ostensibly based on, falls into the latter category. Published in 1954, the post-apocalyptic story revolves around government agents hunting down a mutant named Cris who has the ability to see how any future action will ultimately play out in his life — as well as an animalistic ability of seduction. It’s very weird and very Phillip K. Dick.

A script was written closer to Dick’s original vision, filled with an anti-authoritarian streak and romantic independence. This script was sold to Cage’s Saturn Films, which rewrote it heavily. Next takes the character of Cris and drops just about everything else.

Cris is no longer a mutant but a magician. These early sequences, with Cage explaining his life, call back to an earlier movie of his: Leaving Las Vegas. In that movie, alcoholism is ruining Cage’s life. In Next, it’s his psychic abilities. Cage’s Cris performs in the city’s second-tier casinos as Frank Cadillac (a stage name drawn from his love of Frankenstein and Cadillacs, he later explains), happily predicting the actions of his show’s half-full crowd with corny jokes. He explains the rules of his abilities: he can only see two minutes into the future, and only for his own actions.

These abilities offer him a massive advantage in the right circumstance and also keep him just out of reach of more massive changes. To earn a little money, Cris uses his power to gamble. He makes clear that he only uses his powers against the casino, not other players, and tries to limit his winnings so as to not arouse suspicion. But try as he might, the security staff eventually catches on.

There are echoes of the original story in how Cris uses his power in these early casino scenes. He dodges through the guards with split second timing, using his power to understand where things will be placed by the time he gets there and following through. A bit like an actor on set as the director says, “Action!,” Cris can move through the world as if it was built for him.

But new surprises keep following him, including a man who tries to rob the casino. Cris stops him and escapes, but this puts him in the sights of the FBI’s Callie Ferris, played by Julianne Moore. Ferris thinks that Cris can help the FBI find a nuclear bomb, but he has other things on his mind.

Specifically, he’s interested in Jessica Biel’s Liz, who he sees at a Los Angeles dinner. For unexplained reasons, Cris can see all of Liz’s potential futures, far beyond what he can see for himself. He uses his powers to see that the best way to get Liz’s heart is to get beat up by her creepy ex-boyfriend, and from there the two start to bond. They never quite gel as a couple, but there’s an odd chemistry between Cage and Biel. It’s almost like the two can’t quite believe they’re doing this.

The audience watches Cris use his powers in a variety of ways, the most effective being a choose-your-own-adventure style of watching scenes play out with different tactics, similar to the time-travel mechanic in Life is Strange. He runs through every pick-up line he can think of with Liz, getting turned down again and again. Eventually these start to strain credulity. (Even if he could see where they were going to be located, could Cris really dodge bullets by inches over and over again?)

But logic is never Next’s strong suit. One minute Cris is being tortured by the FBI, the next he’s solving their terrorist threat. The actors play into their strengths — Cage is given time to be the oddball audiences saw in Face/Off, Moore is full of righteous anger — but they mostly find themselves ducking and dodging falling objects.

At the time of its release, critics went harshly after Next’s ending, with one saying that it is “not just a colossal cheat, it's a hard slap in the face to anyone who has invested his or her time in watching it.”

Honestly, I liked it. This movie is already absurd, and the ending of Next blows up much of what viewers already know about the movie. The MCU offered a serious upgrade to the problems that plague Next — plot holes, rewrites with clashing visions, unclear character motivations — but Marvel would never end one of its movies like Next ends.

Next is not a movie to seriously invest in. It’s one to let wash over you during a relaxing weekend. Back when cable was the norm, this is a movie you’d switch on halfway through for the cast and sit there at the end, confused by what you just saw. There’s a certain weirdness in Next that can hit just the right spot.

Next is streaming now on Amazon Prime in the U.S.