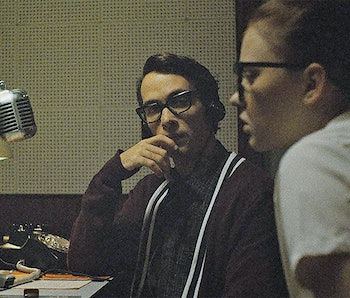 The Vast of Night, director Andrew Patterson’s feature debut, is a low-budget sci-fi movie that seems to thrive on its limited budget. Forgoing the flashy CGI of a Marvel movie, Patterson and his small cast are able to forgo flashiness to create a work of intensely watchable paranoia. The Vast of Night creeps up on the viewer, lingering long after the movie has ended.

If you're an Amazon Prime subscriber, you can watch The Vast of Night for free on Prime Video.

The movie sees two teenagers in 1950s New Mexico search for the origins of mysterious sounds they hear over the radio, offers up a magnetic look at small-town life in both warmth and loneliness. Focusing on Jake Horowitz’s Everett, a young radio DJ who dreams of stardom in L.A, and Sierra McCormick’s Fay, the drama mainly happens in conversations punctuated by the movie’s signature tracking shots.

Outside of a brief Twilight Zone-esque framing mechanism, the movie truly starts with one of these tracking shots. It’s storytelling is a combination of the visual and verbal, which sounds like how all movies communicate information, but Vast of Night does so with exceptional skill.

The camera follows Everett into a basketball gym as a game is about to begin. The viewer knows nothing about Everett or this game, but through rapid-fire communication the viewer can slowly realize that Everett is a popular young man who is not going to attend the basketball game, but has been called in for some technical assistance.

The first twenty minutes of Vast of Night have been compared to the famously fast dialogue of Howard Hawks, the director of the famed 1940 screwball comedy His Girl Friday, which actually used a sound mixer on set to increase the speed of dialogue. Vast of Night doesn’t use those technical tricks, but instead relies on familiarity.

The dialogue in these first twenty minutes jumps all around, moving from confused identities to a new tape recorder Fay ordered from a catalog, to what people waiting for the basketball game to start think of chipmunks, to the technological possibilities of the future.

If you’ve ever been part of a close-knit community, these conversations, and their rapidity, sound familiar. They sound like people who know each other well just talking for the sake of it, and Patterson’s slow-moving camera lets the viewer feel like they’re being let inside. The magic of Vast of Night starts well before anything paranormal starts happening, with the slow-moving cameras vacillating between the excitement of the game and the intimacy of the conversations.

It’s a credit to Horowitz, McCormick, and Patterson’s writing that these extended scenes never feel dull. They’re engrossing and personal, two friends caught up in their dreams of the future. You want to stick with these characters for a whole movie, regardless of where it goes. And then the strange sounds start occurring, and then people start calling in with even stranger stories.

The sounds are spooky, but nothing especially surprising if you’ve watched your fair share of alien movies. Patterson understands, like Steven Speilberg did in Close Encounters of the Third Kind, like George Romero did in Night of the Living Dead, that the aliens and the supernatural matter less than how people react to them. And Patterson explores skepticism, friendship, and isolation in a script that flows like a powerful river.

Vast of Night plays against black skies and empty rooms, moving between monologues with a rolling energy that grows as the movie progresses. It manages to pay homage to classic thrillers like Them! and Invasion of the Body Snatchers while also offering something completely new. It has the intimacy of a play, especially in one key scene with Gail Cronauer as an elderly widow with nothing to lose, but a sense of wonder that can only be found in the movies.

More like this
Culture
7.28.2022 11:30 AM
You need to watch the most underrated sci-fi thriller of the '60s before it leaves HBO Max next week
By David Grossman
Entertainment
8.3.2022 4:17 PM
Prey is an old school throwback that brings new life to the Predator series
By Eric Francisco
Entertainment
7.29.2022 3:00 PM
Amazon’s Paper Girls is the best new time-travel TV show since Dark
By Mónica Marie Zorrilla
Related Tags
Share: