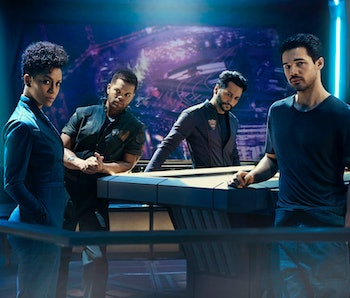 This article was originally published on December 16, 2019 and will no longer be updated. For all the latest updates on The Expanse Season 5, check out this article instead.

The Expanse Season 4's slow-burn built up to a massive payoff. The Roci crew ventured to Ilus, a colony planet just beyond the Ring Gate, to prevent the spread of the insidious Protomolecule. Holden caught up with his old pal Joe Miller, Naomi experienced planetary gravity for the first time, and Amos made a new ladyfriend. Back in the Sol system, we saw our first indications of a dramatic power shift away from Earth and Mars in favor of the long-downtrodden Belters.

Here's everything we know about The Expanse Season 5.

When was the release date for The Expanse Season 5?

The first three episodes of Season 5 premiered on December 16, 2020, with new episodes available each Wednesday following, culminating in the season finale on February 3, 2021. The entire arc consisted of 10 episodes, as has been the case for every previous Expanse season.

Additionally, The ninth book in the series upon which the show is based, Leviathan Falls, is due in November 2021. That means it's shaping up to be a pretty great few months for Expanse fans.

Is there a trailer for The Expanse Season 5?

There sure is! The showrunners revealed a new trailer for Season 5 of the Amazon sci-fi hit at a panel during the all-online New York Comic Con in October 2020. You can check it out below:

The trailer gestures toward the full, terrifying scope of Marco Inaros' plans to shift the balance of power in the Sol System in favor of the long-oppressed Belters. We first see Holden chilling out on an awesome-looking space station, but he's finding it tough to relax and enjoy a little shore leave while the Protomolecule's still romping around the galaxy unchecked.

Elsewhere, Amos wants to head back to his old stomping grounds of Baltimore, despite Avasarala's misgivings. A weary but determined drummer assumes command of Ashford's ship as Bobbie and Alex work to uncover some shady doings within the highest ranks of Mars' rapidly floundering power structure.

What is the plot of The Expanse Season 5?

Book readers already had a pretty clear idea of what to expect from the next installment of the story. Regardless, we learned more about the shadowy pasts of certain members of the Rocinante crew, namely Amos and Naomi. The Sol system faced a terrifying new threat at the hands of Marco Inaros and his newly-minted Free Navy.

At the NYCC panel, showrunner Naren Shankar called it "the most epic and the most personal season we have ever done, simultaneously."

"I call this our Infinity War," said Tipper of the stakes of the upcoming episode, making a comparison to the dramatic Avengers team-up movie that was the culmination of more than a decade of Marvel movie storytelling.

Here's an official synopsis for Season 5, courtesy of Amazon:

Season 5 of the series picks up as multitudes of humans leave the solar system in search of new homes and vast fortunes on the earth-like worlds beyond the alien Ring, and a heavy price for centuries of exploitation of the Belt finally comes due and a reckoning is at hand. For the crew of the Rocinante and the leaders of the Inner Planets and the Belt, the past and present converge, bringing forth personal challenges that have wide-reaching repercussions throughout the Solar System.

Amos (Wes Chatham) returns to Earth to confront his past and the legacy of the life he fought to leave behind. Naomi (Dominique Tipper) reaches out to her estranged son in a desperate bid to save him from his father’s toxic influence. Bobbie (Frankie Adams) and Alex (Cas Anvar) confront the collapse of Mars as they chase a shadowy cabal with ties to terrorists and criminals. Holden (Steven Strait) wrestles with the consequences of his own past with the Protomolecule, the aliens who built it, and the mystery of what killed them. Drummer (Cara Gee), with a new crew, fights to escape who and what she used to be. And Avasarala (Shohreh Aghdashloo), refusing to be relegated to the sidelines, fights to prevent a terrorist attack unrivaled in history.

Who's in the cast of The Expanse Season 5?

Most of your favorites returned for Season 5, with the notable exception of David Strathairn, who played Klaes Ashford. The character met his untimely end in the Season 4 finale, but he had one hell of a good sendoff.

Which of the Expanse books is Season 5 based on?

The Expanse Season 4 finale already dipped a toe into Nemesis Games, ending with the cliffhanger of Marco Inaros' stunning attack on Earth. Season 5 picked up where that left off, tracing Naomi's attempt to halt her former lover's rise to power.

If you want spoilers about Nemesis Games, you can find them pretty easily online. We won't ruin it for you here if you haven't read them. Suffice to say, though, that book five is widely regarded as a bit of a game-changer for The Expanse. Back in 2015, io9 called it the "James S.A. Corey's Empire Strikes Back." So expect some big drama and stunning reveals.

Will there be a Season 6 of The Expanse?

Yes, but the long-term future for the series doesn’t look great. In November 2020, Amazon revealed that The Expanse would be renewed for a sixth and final season. Of course, cancellation is nothing new to fans of the series. After the show initially got axed from Syfy after three seasons, a crowdfunding campaign from the fandom helped urge Amazon to pick up The Expanse.

That being said, while this may be the end of The Expanse on Amazon, it is certainly not THE end overall. Daniel Abraham and Ty Franck have said they only consider this obstacle a “pause,” and that the studio Alcon Entertainment is very committed to continuing the story on another network. Wes Chatham, who plays Roci engineer Amos Burton, has even told Inverse they've already talked about completing the serious through a ninth season.

"We always thought, wouldn't it be amazing, wouldn’t it be great if we can really stick the landing and deliver a story that we would love to see. That's definitely something we sit around and talk about," Chatham told Inverse in a May 2020 interview. "My hope is that before we get to 2030, we have completely told the whole Expanse story that includes all the novels through nine. I would love to be able to complete the full story and tell The Expanse at its highest expression."

The Expanse is currently streaming on Amazon.

More like this
Entertainment
7.27.2022 4:15 PM
Everything we know about Rick and Morty Season 6
By Corey Plante
Entertainment
8.1.2022 2:00 AM
Westworld Season 4 just copied one of the best Doctor Who episodes ever
By Ryan Britt
Entertainment
8.9.2022 1:00 PM
Has your favorite HBO Max show been canceled? The fate of 9 sci-fi series revealed
By Robin Bea