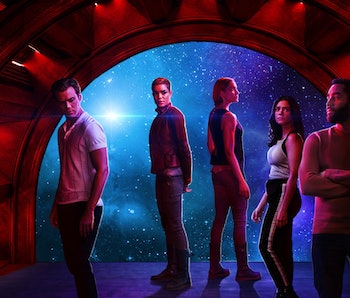 With so many sci-fi options to choose from these days, there’s something rather comforting about Another Life, the new Netflix show that draws inspiration from all of your favorite genre actors and sci-fi tropes to create something new. Perhaps best of all? Season 2 is officially confirmed, as announced by lead actress Katee Sackhoff in October 2019.

Created by showrunner Aaron Martin, Another Life follows Katee Sackhoff’s Niko Breckenridge as she ventures into space on a dangerous mission to save humanity. A strange alien artifact has appeared on Earth, and while scientists investigate its origins, Breckenridge is sent out into space with a crew to investigate the artifact’s origins.

While Battlestar Galactica alum Sackhoff goes looking for answers, we’re on a mission to share everything you need to know about Another Life Season 2, so grab your space helmet and join us as we set off for the cosmos.

Is Another Life renewed for Season 2?

Despite abysmal ratings from critics, Another Life was good enough for the fans — and for viewership numbers — that Netflix officially renewed the series for a 10-episode Season 2. The Hollywood Reporter reported the news in late October 2019, writing that production would resume in Vancouver at some point in 2020.

Actor and producer Katee Sackhoff always remained hopeful, telling Collider in July 2019 that she had plans for Another Life if it’s renewed in the future: “So, we know where the show potentially will go for the first three seasons,” she said. “I love this character, and I love the cast and the crew, and I want to do everything in my power to see it come back, for many years.” So far, it seems like her dreams are coming true.

When is the Another Life Season 2 release date?

What happened at the end of Another Life Season 1?

For most of Season 1, the action is split between Niko in space and her husband Erik (Justin Chatwin), who leads the scientific expedition on Earth. Through their investigations, we eventually learn that the aliens who have shown an interest in humanity aren’t peaceful at all.

The Achaia — as they’ve come to be known — are hellbent on our destruction, but with the help of social influencer Harper Glass (Selma Blair), the aliens convince everyone on earth that their intentions are peaceful. Unfortunately, Erik doesn’t realize that the Achaia is controlling Glass. In fact, he believes that the aliens might be his daughter’s last hope. Jana (Lina Renna) has leukemia, so at the end of Season 1, he brings her to them in the hope of a cure.

Meanwhile, Niko fights to return home in time to warn everyone about the devastation soon heading their way.

What’s the plot of Another Life Season 2?

Season 2 will presumably pick up right where Season 1 left off, following Niko as she rushes back to Earth so she can warn humanity about the Achaia and their true intentions.

As far as she knows, the aliens intend to destroy Earth, but their plans might turn out to be more complicated than that. Instead of killing off the human race, the Achaia might try to subjugate them. This was hinted at in the Season 1 finale when the aliens mind-controlled Glass, using her to manipulate the population and keep humanity unaware of what’s really going on.

If control is their endgame, then it’s likely that Erik will also be hypnotized, given that he was last seen heading into the Artifact for help. That might put further strain on his marriage to Niko once she eventually makes it back to Earth.

Who will be in Another Life Season 2?

Two people who almost certainly won’t be back are Sasha (Jake Abel) and the Salvare’s original captain, Ian (Tyler Hoechlin), although you should never say never in the world of sci-fi.

2020 saw a slew of casting announcements for Another Life Season 2. In June, Tongayi Chirisa was cast as a series regular as Richard Ncube, while Dillon Casey (Seth Gage), Shannon Chan-Kent (Iara), and Kurt Yaeger (Dillon Conner) will all join the show in recurring roles. Shortly after filming wrapped, it was also revealed that Carlena Britch was cast as recurring character Paula Carbone.

Another Life Season 1 is currently streaming on Netflix.