Who is Christina in 'Westworld' Season 4? Evan Rachel Wood explains her "new" character 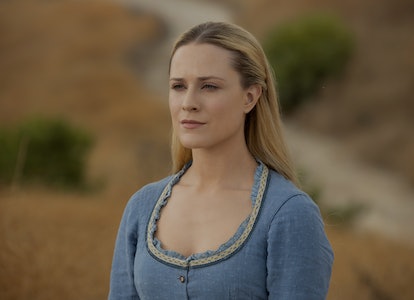 Dolores Abernathy appears to have gone AWOL in the war between humanity and machine. The artificially intelligent gunslinger, all blonde tendrils and robotic ruthlessness, has been replaced with a mild-mannered video-game writer in Westworld Season 4. Or has she?

What’s the deal with Evan Rachel Wood’s character in Westworld Season 4? We asked the actress herself, along with series co-creator Lisa Joy to find out. Warning! Spoilers ahead for Westworld Season 4 Episode 1.

In Episode 1, “The Auguries,” we meet Christina (Evan Rachel Wood), an understated brunette spinning her wheels at a company called Olympiad Entertainment. Something seems wrong, and even Christina seems to know it.

What happened to Dolores? Are we really supposed to believe that she went offline at the end of Season 3? Is Christina just a disguise or a new character entirely?

Both Evan Rachel Wood and Lisa Joy tell Inverse that, yes, actually, it’s time to part with Dolores — or at least part with her character’s most recognizable iteration.

Christina is “a completely new character,” Wood tells Inverse. “Playing [Christina] required a much more human approach this season. I feel like I wasn’t playing a host this season. I was very much a player in the game.”

Why Christina matters in Westworld Season 4

For Lisa Joy, Dolores was a necessary sacrifice to the show’s bigger themes. Most importantly, the “narrative loops” that defined the lives of the Hosts in the Westworld theme park. Wood’s original character arc was a rebellion against her own pre-programmed loop as her AI gained consciousness and fought back against her human overlords.

In Season 3, Westworld zoomed out to reveal that an AI called Rehoboam had essentially subjugated humanity into loops of their own via their smartphones (real subtle social commentary there, HBO). In Season 4, Wood’s new character Christina illustrates just how deep these narrative loops can go.

“Humans find themselves sometimes stuck in a rut, or seemingly unable to change their circumstances or even behaviors that they don’t like about themselves,” Joy says. “That’s been a recurring theme on Westworld, and now we’re just exploring it from a different angle.”

Wood understands why Dolores had to be scrapped, but that doesn’t mean it was easy.

“I get very attached to characters I’m working with,” Wood says. “Any time I have had to say goodbye to a version of her character it has been bittersweet because I have truly loved her evolution. I do miss aspects of her, even divorced from Season 1.”

Still, the Westworld star seemed equally thrilled to be taking on a new role in Season 4.

“It has been difficult but exciting this season,” she says, “especially because I’m not playing a different version of Dolores as I normally do, I’m starting from the ground up.”

Of course, Dolores isn’t really gone either. As Wood points out, there’s a piece of Dolores in each and every “mostly robot” or fully-machine character throughout the series. Not only was her consciousness implanted in several Hosts during the robot revolution — including Tessa Thompson’s character, Charlotte Hale — but as one of the original Hosts, she served as the blueprint for every AI that followed.

“She’s in all of them, in a weird way, and part of her still certainly lives on through Charlotte Hale,” Wood says. “Dolores never died.”