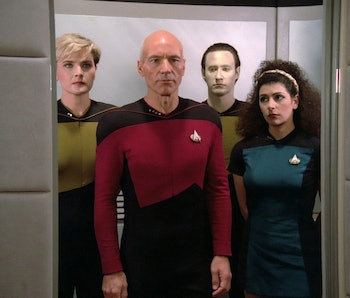 Jean-Luc Picard’s greatest nemesis — and eventually, his greatest defender and savior — the space god Q (John de Lancie), was there at the beginning, when Star Trek: The Next Generation debuted on September 28, 1987. In “Encounter at Farpoint,” the series’ two-hour inaugural episode, Q puts the crew of the Enterprise — and all of humanity — on trial. But this defining moment almost didn’t happen. As first written, “Encounter at Farpoint” didn’t feature Q at all, until a pivotal rewrite from Trek creator Gene Roddenberry...

The road to The Next Generation was long and complicated. It arguably started in the 1970s, when the development of a live-action series called Star Trek: Phase II eventually resulted in the first Trek feature film in 1979: Star Trek: The Motion Picture. After losing most of his creative control over the Trek feature films starting with The Wrath of Khan in 1982, Trek creator Gene Roddenberry assumed he’d never helm a Star Trek series again — that is, until 1986, when Paramount brought him a proposal for a very different version of The Next Generation, which involved a conflict with the Klingon, a holographic captain, and all sorts of things Roddenberry hated. Although close to retirement, Roddenberry was galvanized by the proposal for a bad Next Generation and decided to try to make a good version instead.

After retooling many of his own ideas for Phase II, Roddenberry hired some his collaborators from Star Trek: The Original Series to help fill out the writers’ room. For the pilot episode, he got Dorothy “D.C.” Fontana, the former script editor on The Original Series and The Animated Series and author of such Trek classics as “Journey to Babel” (TOS) and “Yesteryear” (TAS).

Fontana’s assignment was to write an episode about the Enterprise and the mystery of Farpoint Station. (Spoiler alert: The station is really a giant jellyfish alien.) But, when Paramount demanded that Roddenberry turn the one-our pilot episode into a two-hour premiere, things got contentious. D.C. Fontana (and others) claimed that Roddenberry swindled her out of extra money to write the extra pages, whereas Roddenberry (and others) claim Fontana couldn’t do the extra writing due to the tight turnaround. While Roddenberry’s duplicitous business practices are well documented, the result of this kerfuffle is slightly more interesting than finger-pointing about writing payments. Because Gene Roddenberry added a “frame” to the story of Farpoint Station, and that rewrite defined all of The Next Generation.

Essentially, what wasn’t in Fontana's version of “Encounter at Farpoint,” was Q. The notion of an all-powerful, flippant, and amoral space god challenging Picard and the USS Enterprise was a classic Star Trek set-up. In The Original Series, Captain Kirk bested false gods constantly, and Roddenberry liked scenarios in which humanity had to be analyzed in extreme terms. While Roddenberry didn’t invent the idea of a human being defending our entire species in a courtroom run by super-advanced aliens (that concept appeared in the 1958 Robert Heinlein novel Have Space Suit—Will Travel), he did perfect the Star Trek version of it.

And, yet, when Roddenberry wrote Q into “Encounter at Farpoint,” the writing staff of TNG cautioned him against it. Because Q’s attitude and behavior were so similar to an Original Series character named Trelane (William Campbell) from “The Squire of Gothos,” writer David Gerrold and others felt like it wouldn’t work. But Roddenberry was sure “the way I'll do it, the fans will love it.”

Roddenberry was right. Q’s presence in “Encounter at Farpoint” gave a somewhat run-of-the-mill space mystery more weight, and created an ominous ticking clock for The Next Generation. Not only was Q out there, but, from his point of view, humanity was still on trial for crimes of basically being inconsistent and having a deeply immoral past. While the first two seasons of The Next Generation are wildly inconsistent, with some of the episodes outright unwatchable, “Encounter at Farpoint,” remains brilliant because of Q’s meddling. John de Lancie is both frightening and hilarious and more than holds his own against Patrick Stewart, not a simple task. The ethical debate between Q and Picard— that humanity is/is not inherently good — pervades all seven seasons of the series and, most recently, extended to Season 2 of Star Trek: Picard in which Q made his final appearance.

There’s a lot to love about The Next Generation 35 years later, but the most important piece of writing in its pilot episode was all thanks to Gene Roddenberry taking a big risk. The introduction of Q ensured that The Next Generation would always strive to be a series about more than just what was literally happening out in space. By pitting Picard against Q, The Next Generation asserted very clearly that the final frontier wasn’t out in space, but instead, was all about the exploration of the human condition.

Star Trek: The Next Generation is streaming on Paramount+.