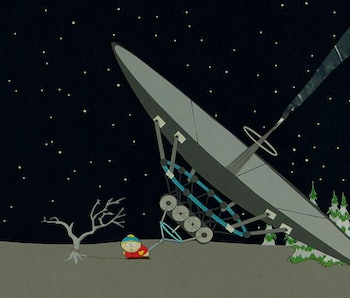 “A witless offering,” slammed The Hollywood Reporter. “If only the kids’ jokes were as fresh as their mouths,” Entertainment Weekly remarked. “A general air of malicious unpleasantness,” blasted The Washington Post. The scathing response to its opening episode in August 1997 suggested South Park wouldn’t make it past a single season, let alone still be churning out episodes at 25. And yet, this month, creators Matt Stone and Trey Parker will appear alongside the likes of Ween and Primus for a concert celebrating the cartoon’s silver anniversary.

You have to cut its creators (particularly the more artistically-minded Parker) some slack for the latter. The creative pair spent three months holed up in a Denver studio painstakingly cutting and pasting hundreds of paper cutouts to produce just 22 minutes of TV. (The initial edit was nearly half an hour!). It’s why the non-speaking characters, including future favorite Butters, barely move and why the pilot looks as DIY as the viral festive shorts that first put the gang on the map.

Both Fox and Comedy Central courted Stone and Parker after “The Spirit of Christmas” nearly broke the early internet. Parker later admitted they felt the pressure to “push things maybe further than we should” in a bid to repeat the short film’s success. That’s no doubt why you only have to wait 6 seconds to hear a sex toy reference, why irritable bus driver Mrs. Crabtree is repeatedly described as a “bitch,” and why the central storyline revolves around an alien life force inserting a probe up Cartman’s butt.

“We made three people cry.”

Following the test screenings, Comedy Central demanded a different ending, resulting in another six days of laborious construction-paper work for Parker and Stone. These last-minute changes seem unlikely to have placated those tearful viewers. After all, the debut’s finale still includes Cartman farting out a giant satellite dish and Stan inspecting the contents of his vomit with school crush Wendy Testaburger. It also involves Kenny getting attacked by extraterrestrials, trampled on by a herd of cows, and fatally run over by a cop car. (At the time, no one knew he would magically regenerate only to suffer a similarly dark fate every episode.)

However, it wasn’t just the Middle America-riling, gross-out humor that left critics saying: “South Park is bad, mkay.” Most of the more innocuous jokes — such as Kyle instructing his baby brother Ike to jump to safety (“Do your imitation of David Caruso’s career”) or Cartman’s discovery that Scott Baio has given him pinkeye — fall flat, at least upon modern rewatch. (Nothing ages a comedy more than a shoehorned pop culture reference.) While the more absurdist touches — such as when Cartman turns into an “I Love to Singa”-singing kewpie doll — feel like Stone and Parker were simply throwing jokes at the wall to see what stuck.

Admittedly, some things did stick. From “Screw you guys, I’m going home,” to “Oh my God! They killed Kenny! You bastards,” South Park’s debut episode spawned some of the show’s greatest catchphrases and running gags. Many of them double as the perfect introduction to some of the show’s greatest supporting characters. Officer Barbrady’s typical cluelessness: “This is nothing out of the unusual. Cows turn themselves inside out all the time.” Chef’s inappropriate sex jam. Mr. Garrison’s (and Mr. Hat’s) alternative history lesson: “Christopher Columbus helped the Indians win against Frederick Douglass and freed the Hebrews from Napoleon and discovered France.”

But these flashes of genius are few and far between. You can certainly understand why Comedy Central was reluctant to commit to a full series. Only the much-improved and computer-animated follow-up “Weight Gain 4000,” which also deviated from a planned The X-Files-esque narrative arc, convinced execs the show had potential.

Not that its audience was so discerning. Indeed, while executive Brian Graden had hoped the premiere would attract around 200,000 viewers, the Nielsen ratings came in at a whopping 889,000. By the time “Cartman’s Mom Is a Dirty Slut” finally resolved its Season 1 cliffhanger, South Park was pulling in approximately 6.4 million! Thankfully, Parker and Stone had realized that laughs, narrative, and shock value don’t have to be mutually exclusive.

More like this
Entertainment
Sep. 13, 2022
Animators say they're "clueless" and "confused" about HBO Max cancellations
By Steven Asarch
Entertainment
Sep. 14, 2022
58 years ago, Star Trek created its worst trope — now, one character is fixing it
By Ryan Britt
Culture
Sep. 20, 2022
20 years ago one sci-fi failure (almost) changed everything
By Ryan Britt
Related Tags
Share: