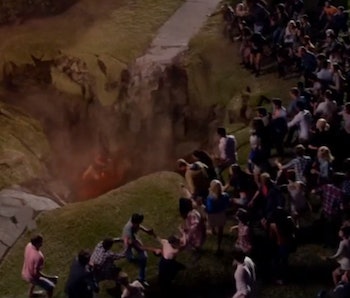 What would you do if the world was ending? In most movies set during the apocalypse, the protagonist sets out on an adventure to save the world or reconnect with a loved one. In reality, you’d probably stay home, eat as much ice cream as possible, rewatch your favorite TV show, and wait for the end. So when a movie manages to capture the reality of living through the apocalypse, it’s incredibly refreshing. And when it features the cast of some of your favorite TV shows too, well, that’s even better.

Released in 2013 and streaming as of this Friday on Netflix, This is the End tells the story of a bunch of celebrities (played by themselves) who wind up stuck in James Franco’s Hollywood mansion during the end of days. If you’ve never seen it before, it’s finally time to remedy that mistake. And even if you’ve watched it a dozen times, it’s worth revisiting. Here’s why.

The plot of This Is the End is brutally simple. After Seth Rogen drags his friend Jay Baruchel to a fancy Los Angeles party, the Rapture occurs, and all the good people on Earth levitate straight up to heaven, leaving the sinners behind to repent or perish. Of course, none of the celebrities at Franco’s party get raptured, and the crowd doesn’t even realize something is wrong until a giant sinkhole to hell opens up in the front yard.

In a particularly chaotic scene, major celebrities like Rihanna, Aziz Ansari, and Michael Cera are sacrificed early on to drive home the seriousness of the situation. When the dust settles, an impressive crew is left behind:

This Is the End is far from underrated. It has a healthy Rotten Tomatoes score of 80 percent and made back its $32 million budget in its opening weekend alone. But as plenty of critics pointed out, it’s also pretty devoid of anything resembling a plot. Most of the movie is just the dudes mentioned above stuck in a house together doing drugs and filming a zero-budget Pineapple Express sequel.

When they finally do leave the house, the film progresses rapidly through some entertaining twists and turns before coming to a rushed ending. But ultimately, none of that matters. What you’ll remember about This Is the End is the joy of simply watching this ensemble cast hang out and argue about candy bars and jerking off.

“It seemed to be an idea that really resonated with people, for some weird reason,” Rogen, who co-wrote and co-directed the movie with Evan Goldberg, told Entertainment Weekly in 2013. “Just the idea of guys stuck in a house together if the world was ending.”

Rogen and Goldberg also take the concept of the Rapture and stretch it in new directions. Or, as Rogen puts it in that same interview: “We definitely Jewed it up a bit.”

“No one accepts Jesus in their heart in order to get redeemed,” he said. “It’s more about self-redemption, which is not what Christians really believe in, for the most part... Movies are always about redemption, so when you find a mechanism that kind of has that as one of the built-in triggers, it was really nice from a writing standpoint.”

Still, This Is the End takes the apocalypse surprisingly seriously. The CGI is impressive and downright scary at times. For Rogen, this only adds to the comedy.

“When we approached the apocalypse, we found that the more seriously we treated it, the funnier the movie was. In a weird way, there was an equation that the less comedically you treat some things, the more comedically the whole movie will resonate, you know?”

Ultimately, Rogen is right. This Is the End is hilarious, partially because of how seriously it takes the apocalypse while treating its cast like one big joke. At the same time, it might be the most realistic movie about how we’d behave if the world actually did end. Because it wouldn’t be pretty, but in hindsight, it’d probably be pretty hilarious.

This Is the End is streaming now on Netflix.

LEARN SOMETHING NEW EVERY DAY

More like this
Culture
November 20, 2022
Before Wakanda Forever, one shocking horror movie put Tenoch Huerta on the map
By Mónica Marie Zorrilla
Culture
November 18, 2022
Netflix's The Punisher is still Marvel at its darkest and most dangerous
By Alex Welch
Science
November 26, 2022
The scariest sci-fi movie on Netflix mirrors a real-life threat
By Tara Yarlagadda
Related Tags
Share: