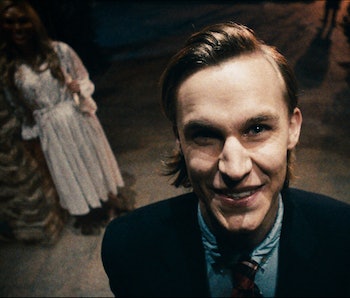 The Purge’s idea is simple enough in its execution — Americans are allowed to be at their most homicidal and sadistic for one night per year in exchange for peace throughout the rest of the calendar — but beneath its gory, clown-faced exterior is an action-thriller chockfull of anti-gun, anti-classist, and anti-ableist advocacy.

There are many social messages to glean from The Purge’s on-the-nose satire that speak to both executive producer Jason Blum and director James Demonaco’s political views, but the one that rings the loudest in the first film of the five-flick horror franchise is that you can’t trust anyone with the authority to bear (and fire) arms.

“As an American, I feel completely trapped,” Blum told The Guardian. “So does over 50% of the country. And one of the ways to get out of that trap is to make movies about it. So certainly the messages have come more to the surface.”

The Purge was already ahead of its time when it released in 2013. It wound up serving as a foundation for Jordan Peele’s Get Out, which debuted four years later as another social horror thriller co-executive produced by Jason Blum. The Purge also foreshadowed — to a certain extent — the uniquely American experience domestic audiences have found themselves enduring for the past decade. Neither The Purge nor Get Out can be considered “escapist” entertainment, and that’s the point.

“The Purge is really about America’s crazy relationship to guns and guns gone wild, essentially, and it kind of laid the groundwork for Get Out,” Blum told NME. “Not all our movies have a social message but I love the ones that do and I’d love to do more of them.”

The Purge opens with an alarming montage, scored to Claude Debussy’s “Clair de lune,” that displays brief scenes from last year’s Purge caught in security footage. These executions, though fictitious, look eerily similar to the grainy news clips we see on television.

Audiences don’t have much time to be confused by the realism of that montage, as it’s almost immediately explained via James Sandin’s (Ethan Hawke) car radio that The Purge is an annual event where virtually all crime is not only legal, but encouraged. The “New Founding Fathers of America” sanctioned the Purge to let Americans release their pent-up rage for one night and one night alone, dropping the crime rate significantly for the rest of the year and boosting the economy thanks to massive sales of both weapons and security systems.

One such security system has made CEO James and his family — wife Mary (Lena Headey) and kids Zoey (Adelaide Kane) and Charlie (Max Burkholder) — immensely wealthy, with a McMansion in the hills of Los Angeles as evidence of his success in selling and installing surveillance and defense appliances. Almost every household in their tory community uses their services. The Sandins don’t feel the need to participate in The Purge, but they’re in the minority.

LEARN SOMETHING NEW EVERY DAY

The ante is upped almost immediately for the Sandins after the haunting emergency broadcast system message plays after family dinner, informing all of America that The Purge has begun:

“This is not a test. This is your emergency broadcast system announcing the commencement of the Annual Purge sanctioned by the U.S. Government. Weapons of Class 4 and lower have been authorized for use during the Purge. All other weapons are restricted. Government officials of ranking 10 have been granted immunity from the Purge and shall not be harmed. Commencing at the siren, any and all crime, including murder, will be legal for 12 continuous hours. Police, fire, and emergency medical services will be unavailable until tomorrow morning until 7 a.m., when The Purge concludes. Blessed be our New Founding Fathers and America, a nation reborn. May God be with you all.”

The limits are few and the desire for bloodshed is widespread, as sirens go off and screams begin to be heard far away from James’ safe gated community. The Sandins, however, are planning on having a quiet night in. It’s a horror movie, so you can imagine how that goes.

Zoey’s boyfriend Henry (Tony Oller) is the first person to infiltrate the Sandins’ supposedly foolproof security system and “release the beast,” as Purge participants like to say, attacking James for forbidding his relationship with Zoey because of their wide age gap.

Meanwhile, Charlie lets in a man running from a terrifying group of wealthy people who yearn to exterminate the homeless for the supposed good of the United States. The presence of the man, credited only as the “Bloody Stranger” (Edwin Hodge), soon invites even more trouble to the Sandin household.

The horror, which is of the monstrous violence variety rather than the genre’s classic monster jumpscares, begins to unspool rapidly as masked freaks in the neighborhood insist they have the right as rich, hardworking Americans to shoot anyone bothering them or dragging down society. And, on this night in this dystopian version of America, they technically do. The Sandins were prepared to lockdown and avoid such Purge fanatics, but they soon realize how ill-prepared they were to be skeptical of their so-called neighborly friends.

The Purge and its sequels never performed particularly well among critics. Rotten Tomatoes scores for the flicks waver somewhere between 40 to 60%. The fifth and (for now) final movie in the series, The Forever Purge, wound up with the highest audience score — 78%. Still, their reception only grew more positive with each new release, as director James DeMonaco shifted the narrative to play out less like a parable and more like a dismayingly prescient political satire.

“Every time there’s a shooting in the United States, there’s a loud voice that says the way to avoid a shooting is to pile more guns into the world. The president thinks teachers should carry guns in schools, which is just preposterous. The notion of The Purge, when we started, was this fantastical idea. But because we have a wacko for a President, it seems a lot less outlandish now,” Blum said in a 2018 interview with The Guardian.

The first Purge film may have been a clunky start to the franchise, but its premise successfully captivated audiences for nearly eight years, even as America became increasingly desensitized to the constant news of police brutality, school shootings, and pandemic deaths. Perhaps the draw that’s made The Purge saga one of the highest-grossing horror franchises of all time comes less from its horror and gratuitous bloodlust, and more from its disturbing, somewhat plausible scenarios.