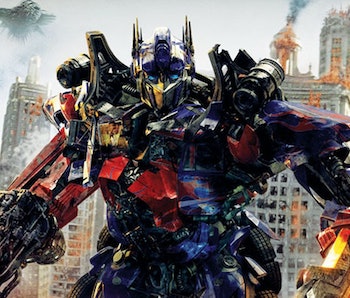 2011 was 12 years ago, but as far as the cinematic landscape goes, it might as well be an eternity; both audiences and movies have changed considerably. Back then, the Marvel Cinematic Universe was still in its relative infancy, James Cameron’s Avatar had recently become the highest-grossing film of all time, and the contemporary formula for the big-budget studio blockbuster hadn’t yet been refined to its zenith.

There are smashing successes and embarrassing failures littering the graveyard of early 2000s summer action flicks, and leading the charge has always been Michael Bay. As far as turning ‘80s childhood dalliances into solid gold bricks for investors, his Transformers franchise has earned a face on Mount Rushmore. The first movie’s worldwide gross of $709 million was almost seven times its budget, and despite Rolling Stone calling it a contender for the Worst Movie of the Decade, Revenge of the Fallen wrapped up its theatrical run with an astonishing $836 million.

But for Bay, making absurd amounts of money has never been enough: his style has always been a benchmark of ingenuity that Hollywood has chased, and the third Transformers sequel might just be his most earnest testament to that fact. Dark of the Moon’s evocative brand of IP-driven chaos is not only the franchise’s last hurrah before cannibalizing itself, but also a thorough blueprint for the structure and visual spectacle of the 2010s blockbuster.

Although Bay's elasticity as a storyteller has allowed his style to be mapped onto projects ranging from romantic war epics to kinetic action buddy-comedies, within franchises it seems like the only place the filmmaker allows himself to go is up. Even the jump from Bad Boys to Bad Boys 2 feels like a litmus test of how long audiences can withstand a concentrated dose of Bayhem, and the Transformers franchise escalates at even more of a breakneck pace. Dark of the Moon is easily the most audacious of the early Transformers movies. It’s not as bafflingly offensive or unfunny as its immediate predecessor, but it certainly has touches of all of Bay’s worst qualities as a filmmaker.

In this epic culmination of the 1000-year-long rivalry between Autobots and Decepticons, Optimus Prime (Peter Cullen) finds his resolve shaken when his former mentor Sentinel Prime (Leonard Nimoy) allies with the wicked Megatron (Hugo Weaving) to resurrect their planet, although you’d be forgiven for not knowing any of this until about an hour in, considering Bay first chooses to focus on actress Rosie Huntington-Whiteley’s backside.

Whiteley plays Carly Spencer, the new girlfriend of series mainstay Sam Witwicky (Shia LaBeouf). It feels like the departure of Megan Fox was taken as little more than a challenge to present an even more vapid and sexist female lead, which is a shame because Whiteley gave a nuanced-if-short performance as The Splendid Angharad in Mad Max: Fury Road just four years later. Meanwhile, Witwicky is just as insufferable as he’s always been, the premiere bumbling fool in a series filled with inept morons given a severe amount of screentime under the guise of comedy.

But as stubbornly as Bay clings to his juvenile instincts as a storyteller, he’s also unwavering in his commitment to taming the wild frontier of raw imagination. Dark of the Moon is a feast of ever-escalating action spectacle, a dazzling marriage of his keen eye for motion and kineticism with the dedicated effects work of teams at both Industrial Light and Magic and Digital Domain. The biggest and most complicated setpiece in the film, in which the serpent-like “Driller” chews through a skyscraper containing our heroes, is shot with stomach-churning attention to depth-of-field, amplified by a behemoth of CGI-intricacy that took roughly 288 hours per frame to render.

During the production of Dark of the Moon, the resurgence of 3D was fanned by the massive success of Avatar, and although Bay was hesitant to shoot using the format, the personal assurance of James Cameron caused him to lean into it. The result is still one of the most successful integrations of the format into high-concept action, truly captivating viewers with the titanic scale of the alien robots.

Although Batman Begins had already proved the success of the “dark and gritty” reboot, Dark of the Moon took it a step further with a level of visceral destruction that would essentially create the modern blockbuster’s overblown third act. The gigantic sky-beams, mechanoid serpents, terraforming technology, and generally untold levels of ruin that continue to batter audiences year after year began here, and the shift was immediate. Marvel’s The Avengers carried major similarities the year later, and third act stills from 2013’s Man of Steel could practically be mistaken for Bay’s third Transformers outing.

Along with its influence on pop culture, there’s truly something to be said about Dark of the Moon’s attempts to address criticisms and engage with the mythos in interesting ways. A common complaint about the first two films was that the human characters felt irrelevant, and while that’s still relatively true, the film’s opening steals a page from Snyder’s Watchmen and weaves a historical-fiction narrative between the Space Race and the Transformers civil war that, while ridiculous, is both fun and fascinating. There’s also a lot of surprising thematic intention under the surface, with Bay portraying both the Autobots and United States servicemen as refugees of a sort, used and then abandoned by bureaucrats and authority figures. There are outright evocations of 9/11, and while a Transformers movie might not be the best place for bull-headed reflections on the War on Terror, it certainly shows Bay considers the implications of his images more than he’s given credit for.

For better or worse, we have Michael Bay to thank for the current crop of nostalgia-fuel-by-way-of-gratuitous-CGI-spectacle. The Transformers franchise was the punching bag of critics and pop culture, but it made Hasbro and Paramount Pictures Scrooge McDuckian amounts of money, and their influence can still be felt. Dark of the Moon doesn’t absolve the series of its sins, but it’s certainly one of the most technically well-executed and influential blockbusters of the last 20 years.

Transformers: Dark of the Moon is streaming on Netflix through January 31.