“Meat’s back on the menu! 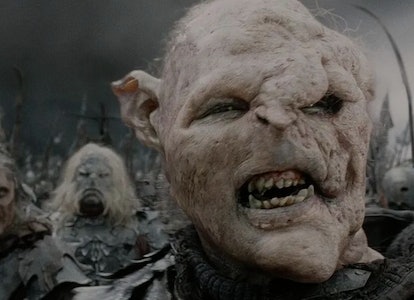 In The Two Towers, Peter Jackson’s “Lord of the Rings” trilogy famously defied all logic by implying that orcs know about menus (and restaurants). It’s a funny gag that’s easy enough to explain away if you don’t feel like getting bogged down in nerdy arguments, but it also reveals how Jackson largely used the orcs for comedic effect. 20 years later, Amazon’s The Lord of the Rings: The Rings of Power is setting the record straight: Orcs aren’t just badass, they’re downright terrifying.

What Lord of the Rings got wrong about orcs

As J.R.R. Tolkien imagined them, orcs are supposed to be scary. They are violent. They are sadistic. They are cruel. They hate everything good. They love torturing their enemies. They’re also very strong.

But in the Lord of the Rings movies, the orcs are basically just fodder for the good guys to cut through in battle. Orcs fall by the dozens under Aragorn’s sword, Gimli’s axe, and Legolas’ bow. They’re funnier than they are scary. They’re easily tricked and more often than not used for comedic effect.

The existence of Uruk-hai in Lord of the Rings also makes the regular old orcs look weak by comparison. Of course, that’s not Peter Jackson’s fault, but the fact that there are no Uruk-hai in Rings of Power does give the show a surprising advantage...

Rings of Power and the power of orcs

From the very start, the orcs in Rings of Power are much more intimidating. As a regular human in Middle-earth, facing down a single orc is terrifying. We see this in Episode 1 when Bronwyn (Nazanin Boniadi) tries to fight one on her own and gets tossed across the room like a ragdoll. Throughout the series, the orcs easily overpower most humans they meet. Even an elf like Arondir struggles to fight them at times.

After Episode 5, Rings of Power is clearly building to a major confrontation between Adar’s orc army and the defiant humans of the Southlands. With the battle set to take place in a fortified old watchtower, the Helm’s Deep parallels are obvious. But unlike The Two Towers, Amazon’s Rings of Power doesn’t need Uruk-hai and gunpowder to raise the stakes. The strength of the orcs alone is enough to strike fear into the hearts of the humans of Middle-earth — and the audience watching at home.