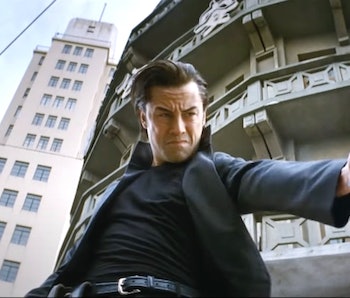 A protagonist meeting themself in a time travel story is always awesome — except, of course, if their future self turns out to be Bruce Willis.

10 years ago, on September 28, 2012, Rian Johnson’s excellent time travel thriller Looper hit theaters. But, although the movie had an uphill battle trying to convince viewers Joseph Gordon-Levitt could one day grow into Bruce Willis, the element that required the greatest suspension of disbelief had nothing to do with this bold casting decision. Rather, there’s a wibbly-wobbly, timey-wimey plot hole at the center of the movie. Let’s unpack it.

Looper focuses on the titular “looper” assassins, who kill people from the future in time travel-aided executions. Our main looper is Joe (Joseph Gordon-Levitt), who freaks out when he’s tasked with killing his older self (Bruce Willis.) Complicating matters is the idea that, in the future Bruce Willis comes from, there’s a terrible dictator named “The Rainmaker” who has made the world absolutely terrible. In Young Joe’s time, the Rainmaker is a little kid with a nice single mom, Sara (Emily Blunt). Old Joe wants to kill the tiny Rainmaker and Sara wants to save her son.

Much of the movie plays with the notion of a predestination paradox; Young Joe starts to realize that, in an effort to take out the Rainmaker, Old Joe might accidentally create the very future he’s trying to prevent. It’s a classic time travel shenanigan and the sort of thing that is often described as a “Jinn” or bootstrap paradox. (The SyFy version of 12 Monkeys has a lot of these, and they’re a little tighter than in Looper.)

Anyway, the point is: the only bad futures that exist include Joe. And so, Young Joe kills himself at the end of the movie, thus removing his own influence from the timeline. Old Joe vanishes and, in theory, the world becomes a better place. Pretty cool, right?

There’s just one problem: Joseph Gordon-Levitt tells us in a voiceover that he’s going to do all of this. In fact, he narrates the entire movie, from a strange place of omniscience — which, even before the end of the film, is really the story’s only serious flaw. Looper is such a cool concept, not to mention directed expertly and brimming with great performances, so it’s truly baffling that Johnson felt he needed the voiceover. It’s like somebody mandated a voiceover, a la Blade Runner, but, in this case, nobody actually made Johnson do it. And the voiceover bizarrely undoes the major denouement of the film.

The problem is simple: How can Joe tell us he killed himself? Is a time-ghost narrating the entire movie? Did this time-ghost version of Joe leave a little diary for someone to read? The narrator isn’t some disembodied voice of someone else. The story is narrated in the first person, with Joe-as-voiceover saying things like: “The path was a circle. Round and round. So I changed it.” Thanks for the story, Ghost Joe!

Many retrospectives on Looper have pointed out that the movie is just too fun and slick to get hung up on some of these plot points. This is probably true, and we should probably just give Rian Johnson a break. And, yet, when you consider the perfect plotting of Johnson’s Knives Out or even The Last Jedi, this Looper voiceover makes a near-perfect sci-fi movie slightly less perfect. Maybe someday, somebody can go back in time and make a version of Looper without the voiceover. If you’re lucky, that’s already happened, and this article you’re reading has been erased.

Looper is currently streaming for free on Tubi.

More like this
Culture
November 26, 2022
Steven Soderbergh’s only sci-fi movie is better than you remember
By Josh Bell
Entertainment
November 17, 2022
The Peripheral Episode 6 release date, time, plot, and more for Amazon’s sci-fi series
By Jeff Spry
Entertainment
November 13, 2022
Dune 2 leak could reveal the most important location in the book
By Ryan Britt
Related Tags
Share: