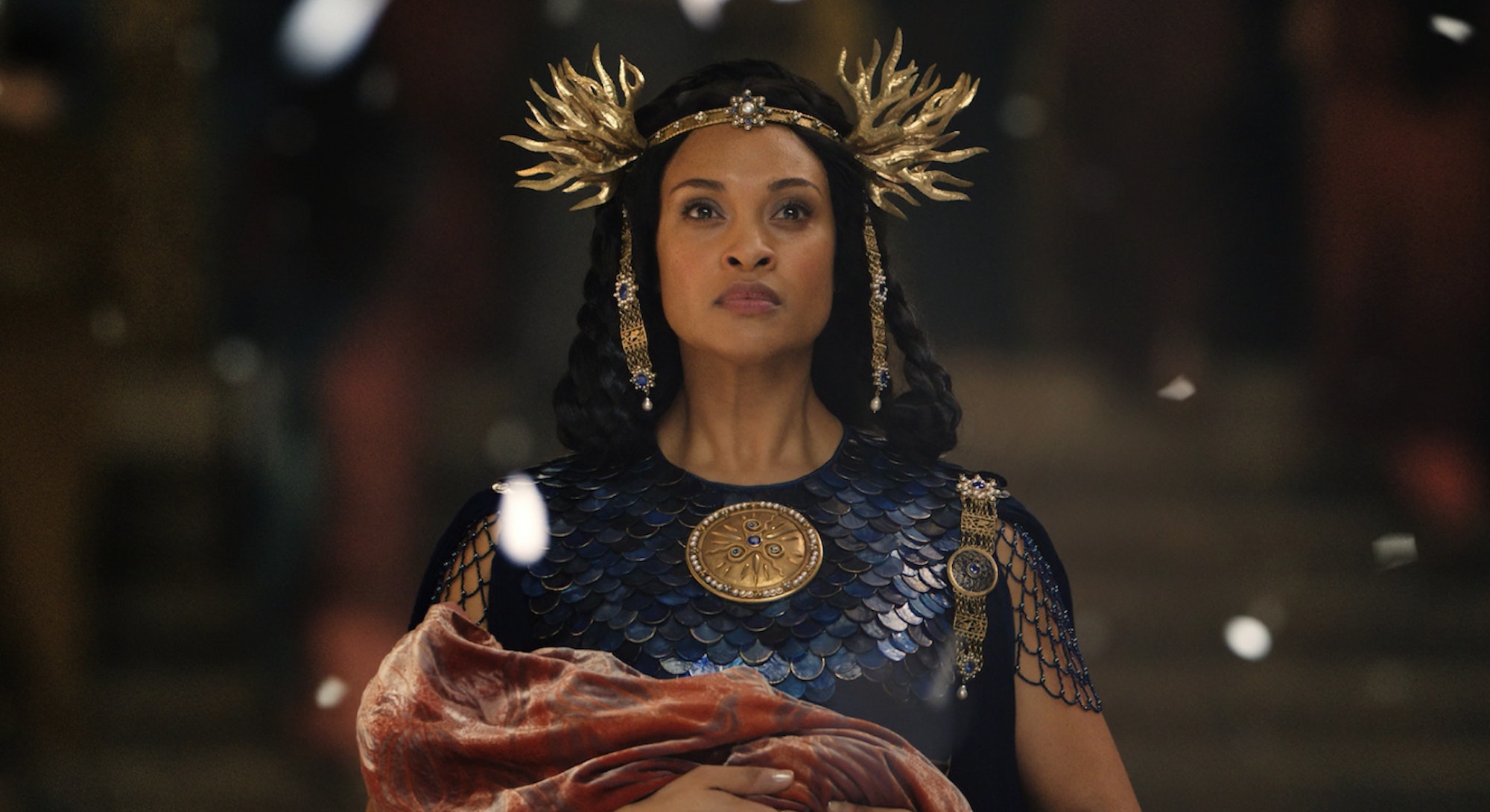 In January of 1974, Get Christie Love! premiered on ABC, making history as the second TV show to star a Black woman (and the first in a show about crime-fighting).

A year later, it was canceled.

“I remember fans making fun of the show, its title, and the actress playing the lead cop,” recalls Michael Kramer, a communications professor at St. Mary’s College.

Kramer tells Inverse that while private detective and police series were hugely popular in the ‘70s, “the programs were full of racist stereotypes where the few Black characters were the criminals.”

Get Christie Love! couldn’t overcome the prejudices of its time, even if it went on to inspire future cinematic classics, from Reservoir Dogs to Austin Powers. (When Beyoncé shouts, “You're under arrest, Sugah!" in Austin Powers: Goldmember, she’s quoting Christie Love’s catchphrase.)

In the five decades since Get Christie Love! debuted, representation of non-white actors across almost all television and movie genres is sorely lacking — and even when casts do include actors of color, audiences can seem to turn against them. While some studios are fighting back and working to protect actors of color, experts say they still not doing enough to protect and support their non-white and non-male actors. This year has been a case in point.

In May 2022, Disney announced the casting of Leah Jeffries, a 12-year-old Black girl, as the demi-god daughter of the Greek goddess Athena in the new series adaptation of Percy Jackson and the Olympians. The criticism hurled at the child actor’s casting was immediate — some complaints on social media went so far as to best be described as slurs.

The harassment was so egregious that Percy Jackson author Rick Riordan wrote a blog post imploring these so-called fans to stop being racist:

“‘But I am not racist,’ you say. ‘It is not racist to want an actor who is accurate to the book’s description of the character,'” Riordan wrote. “Let’s examine that statement…You are judging her appropriateness for this role solely and exclusively on how she looks. She is a Black girl playing someone who was described in the books as white. Friends, that is racism.”

Jeffries’ experience is not unique. Weeks later, the actress playing Obi-Wan Kenobi’s Reva — Moses Ingram — appeared for the first time in the series and was immediately bombarded with hundreds of threats and racist insults. She shared some of the comments on her personal Instagram account. Again, someone else on the project — in this case, Obi-Wan Kenobi lead Ewan McGregor — begged people to stop bullying her.

“I am certainly not surprised at the hate directed at Iman when Comicsgate is still a reality,” Safiyya Hosein, who is a Ph.D. student in communications and culture at Ryerson University studying Muslim representation in pop culture and comics, says, referencing the extremist, alt-right campaign in opposition to diversity in North American superhero stories that gained traction in 2017.

“Young adult Muslim female fans of many different cultures never saw themselves represented until now. There needs to be room for these characters to be included in popular culture for younger generations to feel included.”

Amazon’s Lord of the Rings prequel series, which came out in early September, has notably cast several non-white actors — a departure from the casting of Peter Jackson’s Lord of the Rings films and the original J.R.R. Tolkien books. Some fans of the Jackson films and the literature were dismayed that Rings of Power “went woke,” as CNN reported. The issue was Amazon had opted to cast Black and brown actors to depict Elves, Hobbits, and Dwarves, such as Ismael Cruz Córdova, Lenny Henry, Sophia Nomvete, and Sara Zwangobani.

“The CW took almost seven years to speak up about anti-Blackness.”

Much like Ms. Marvel and Obi-Wan Kenobi, the Lord of the Rings spinoff encountered hostility before its official debut — some critics even called it a “diversity dumpster fire.” Amazon responded by (temporarily) blocking user reviews of the show on both Amazon and IMDb, which Amazon owns. Cast members from the original movies, including Elijah Wood, publicly supported Rings of Power’s race-blind casting.

A history of racism in fandoms

Like the word “fandom,” which first entered our lexicon in 1903, racism among “fans” is not a new phenomenon. What is new is the way behemoth media conglomerates and production studios react to it.

Octavia Middlebrooks, who studied art history at Winthrop University with a focus on African American representation in entertainment and now runs the Fangirl Activated blog, recalls how Martha Jones (Freema Agyeman) was vilified online after she was cast as the first Black female companion on Doctor Who.

Black actress Candice Patton, who plays Iris West-Allen in The CW’s The Flash, was another early target of “violently racist harassment” for playing the superhero’s love interest and eventual wife.

“The CW took almost seven years to speak up about anti-Blackness, and it wasn’t even in the context of the harassment toward their Black actresses,” says Stitch, the author of Teen Vogue’s ‘Fan Service’ column. “It was as part of their performative BLM support.”

“I don’t remember Disney stepping in or up enough, if at all.”

When an actor of a different race plays a pre-existing character, like Patton, it is called “color-blind” casting. Hosein explains that in almost every instance where a Black or brown person is cast in a role previously described or portrayed as being white, they become the victim of bigotry and harassment.

This is true even for characters previously shown in animated forms. For example, when Black actress Halle Bailey was selected to play Ariel in The Little Mermaid, for example, fans pushed back.

“Disney keeps trying to be diverse by casting black people as our white princesses in their live actions, but they just keep getting it wrong,” wrote one person on the Disney Movie Addicts Facebook page in response to Bailey’s casting states.

Disney, in turn, gave a lukewarm public response. The Disney-run Instagram profile for Freeform posted a statement, and the official account for The Little Mermaid live-action remake initially re-posted Freeform’s statement. But the film’s page later deleted the post.

“I don’t remember Disney stepping in or up enough, if at all,” Hosein says of the official response. “Their silence only emboldens racist fans.”

Meanwhile, the original voice actress for Ariel, Jodi Benson, did come forward and express her support for Bailey, both after the official casting announcement was made by Disney and after the first teaser trailer was aired at D23 on September 10, 2022.

Despite the potential blowback from irate fans with outdated ideas about what characters should look like, the majority of the people Inverse spoke to say Hollywood shouldn’t back down from the challenges of authentic and equitable representation in TV shows and movies. Instead, the entertainment industry should double down.

In the case of Star Wars’ Moses Ingram, the case for proactive measures becomes obvious — Ingram’s casting started receiving criticism before there was any content actually to judge her performance on.

“Ingram was attacked before the Obi-Wan Kenobi show even aired,” communications professor Michael Kramer tells Inverse. “Which makes the racial motivation even more transparent as there was no actual content to criticize.”

Bezi Yohannes, author and co-host of Dreaming in the Dark podcast, agrees.

“Those same white and non-Black subsections of Star Wars fandom were never going to take Moses’ character well,” she says.

“We need stories that tell the truth of racism and how we can abolish it in every universe we create.”

Sketch comedian Stef Curran points to The Falcon and the Winter Soldier and its reveal of Isaiah Bradley (Carl Lumbly) as the first Black superhero as an example other companies should follow.

“We need stories that tell the truth of racism and how we can abolish it in every universe we create,” Curran says.

Stefan Huddleston, history and humanities lecturer at the University of Colorado, tells Inverse that social media platforms are partly to blame for escalating racism in fandoms. Discriminatory posts get recycled with the push of a button.

“By conflating free speech with what private companies can do to moderate speech, trolls are often trapped by the public misconception of how free speech works,” Huddleston says.

“Why not hold Instagram live sessions on critical race theory?”

Corporations like Disney could do more to defend Black and brown actors online and provide their casts with counseling services, these experts argue. But social media and other internet companies can also do more to protect and educate their users, according to Erica Ito, co-host and producer of Seaweed Brain: A Percy Jackson Podcast.

“Why not hold Instagram live sessions on critical race theory? Break down for people, especially children, just how ridiculous all of this hate is,” says Ito.

“After decades of colorblind casting, companies that are surprised by racist and anti-Black fans can't claim ignorance,” writer and podcaster Bezi Yohannes says.

“Actors like Candice Patton have spoken about their experiences at the hands of fandom at length. Multi-billion-dollar companies need to foster Black talent at every level of production who will work proactively instead of reactively.”

“An action plan — including a therapist with experience in C-PTSD and online harassment — needs to be drawn up alongside a contract because the harassment that these performers of color, especially Black ones, get from fandom can last years,” adds Teen Vogue writer Stitch, noting that the online abuse hurled at The Flash star Patton has never ceased throughout the show’s eight-season run.

“Diversity evaluation and insight should be the norm, not the exception.”

Neisha T. Mulchan, CEO of Diversely Geek, offers another suggestion for larger studios attempting to produce more inclusive programming: developing insight tools and inviting diverse viewers to sit at the table for evaluation of not only the content of a program but also the many ways it’s marketed and how fans engage with it.

“I know that Disney often has internal evaluation systems that guide how they develop projects, and for the most part, they are effective, but I believe diversity evaluation and insight should be the norm, not the exception,” she says.

No matter how social media platforms and entertainment behemoths decide how to handle hate in fandoms, Middlebrooks reminds us that white fans also need to come to terms with changing representation in films and audiences. Diversity in franchises does not “replace” white actors and creators’ previous and current contributions to film and television.

“I wasn’t surprised by the hate that Iman Vellani and Ms. Marvel have gotten, given how intense Islamophobia has been for the last couple of decades and all of the great replacement theory nonsense,” Hosein says.

But even with all of the distressing and disturbing posts about Ms. Marvel, she’s seen a lot of people embracing the series and applauding its portrayal of characters from different ethnic and religious communities coming together in harmony.

“I’ve seen real cross-cultural exchange take place online with fans of the show where people who are not South Asian and Muslim have both learned about this cultural background and can relate to it in their own ways,” Hosein says.

“I think that counts for something. Beneath all of this hate, there has been a lot of meaning.”

Inverse reached out to Disney and Amazon for comment on this article but did not receive a response.