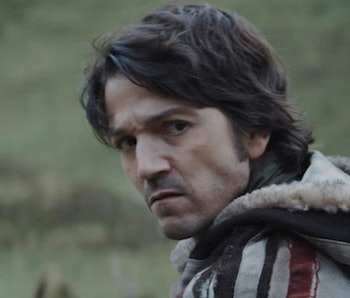 Star Wars fans are a tribal bunch. We know what we like, and when someone tries to challenge the status quo, it typically doesn’t go over well. But despite all that, Tony Gilroy's outsider perspective on the franchise has proven to be one of the best things to happen to Star Wars in years. Andor proves there are still new stories to tell in that galaxy far away.

Except, one moment in the Andor Season 1 finale has us wondering if we’re wrong. Episode 12’s unexpected post-credits scene suggests that not even Tony Gilroy can escape the power of Star Wars fan service. Here’s why.

The final episode of Andor Season 1 is almost perfect. From Maarva’s moving funeral procession to the explosive riot that follows, it’s a powerful look at how the Rebellion grew organically under the Empire’s boot. Then, there’s the post-credits scene.

After the season finale comes to an end and the credits roll, we cut to what’s almost definitely a scene created entirely in CGI. Out in space, spider-shaped droids assemble the mechanical pieces that Cassian Andor helped build during his stint in prison.

Then, as the camera zooms out, we see the droids are actually building the Death Star. The rest of the structure is seemingly complete as the Empire puts the finishing touches on its planet-destroying mega-structure.

Basically, the point is that Cassian Andor helped build the Death Star, which will eventually be the thing that kills him and also the focus of his final mission for the Rebellion. There’s some poetic irony here, to be sure, but is this new addition to the Star Wars canon worth the damage it does to Andor?

The problem with Andor’s post-credits scene

If your main goal when it comes to watching Star Wars is to fill in new details on Wookiepedia, then Andor’s final shot is exactly what you’re looking for. But considering how the show spent 12 episodes bucking Star Wars tradition with everything from its script to its (lack of) reliance on CGI, this post-credits scene sticks out like a Wookie on Endor.

The reason Andor’s prison arc worked so well wasn’t because Cassian was secretly building the most iconic weapon in Star Wars history. It worked because it was a well-written and well-acted story about the depressing absurdity of life under fascist rule.

Hopefully, when Andor eventually returns for Season 2, the show will look and feel like everything else we saw in Season 1. But I can’t help but worry that this could mark the beginning of a new chapter for Andor, one that looks a lot more like the prequels and a lot less like the show that redefined Star Wars in 2022.

Andor is streaming now on Disney+.