“The president has initiated ghost protocol.” 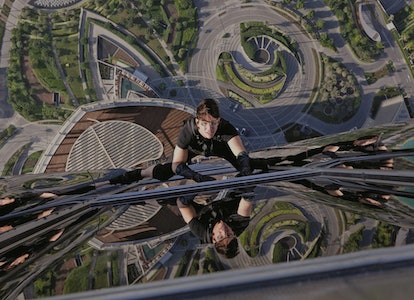 In 2011, Brad Bird did not seem like the obvious choice to direct a live-action blockbuster. The filmmaker behind beloved animated movies The Iron Giant, The Incredibles, and Ratatouille had established himself as a family-entertainment visionary, but no one would have expected him to take up the mantle of one of the biggest action franchises in Hollywood. But it turned out that Bird was exactly the right person to elevate Tom Cruise’s signature series to the next level.

Bird followed in the footsteps of Brian De Palma, John Woo, and J.J. Abrams when he signed on to direct Mission: Impossible - Ghost Protocol, the fourth movie in the series based on the 1960s TV show. As it turned out, Bird was also the last of the series’ rotating directors, as Christopher McQuarrie took over for the next movie and then never left. That makes Ghost Protocol a turning point for the franchise, a culmination of one approach to the material and a bridge to the next.

It’s also probably the most purely entertaining movie in the series, and it’s streaming now on Netflix for anyone who needs a reminder. The evolution of Mission: Impossible into a showcase for mind-boggling stunts takes another leap here with the centerpiece sequence that you’ll remember long after the plot: Cruise, as IMF agent Ethan Hunt, climbing the side of Dubai’s Burj Khalifa, the tallest building in the world. Even though Cruise has undertaken more elaborate and riskier stunts in later films, the Burj Khalifa sequence remains the series’ best combination of spectacle and narrative. It’s amazing to see Cruise hanging off the side of that massive building, but the humor and suspense leading up to that moment are what give it meaning.

That’s mostly thanks to the team Bird puts together for Ethan. He expands Simon Pegg’s role as exuberant tech geek Benji Dunn from J.J. Abrams’ Mission: Impossible III, putting him in the field and making him a foil for Ethan’s grim determination. Ghost Protocol also introduces Paula Patton as Jane Carter and Jeremy Renner as William Brandt, both IMF agents with their own tangled histories. Ethan is reeling from the end of his marriage to Julia (Michelle Monaghan), which was the emotional core of the third movie. He connects with Jane over their shared melancholy at the toll the spy life takes on personal relationships, and Patton brings genuine feeling to Jane’s anguish over losing her partner in the line of duty.

That’s Trevor Hanaway (Josh Holloway), who shows up briefly in the opening and later makes a more substantial appearance in a flashback, establishing Jane’s thirst for revenge against assassin Sabine Moreau (Léa Seydoux). It’s satisfying to see Jane and Moreau get their own fight without the need for a male character to step in. Moreau, however, is a fairly minor player in Ghost Protocol’s intricate plot, which involves a rogue nuclear scientist named Kurt Hendricks (Michael Nyqvist) who’s convinced that the only way to achieve world peace is via nuclear war.

Hendricks plants a bomb in the Kremlin and frames Ethan and his team for the terrorist act, which forces the IMF director (Tom Wilkinson, making the most of his cameo) to tell Ethan with utmost seriousness, “The president has initiated ghost protocol.” Ethan himself has been disavowed before, but now the entire IMF joins him, and Ethan and his team must stop Hendricks with only a fraction of the super-fancy gadgets they normally have access to.

That’s part of the reason Ethan is forced to climb the Burj Khalifa, as it’s the only way for the team to access a server room essential for the deception they’re running on one of Hendricks’ associates. And even though Ethan has magnetic gloves that adhere to the side of the building, the technology malfunctions, leaving him hanging like Harold Lloyd off a giant clock in the silent comedy classic Safety Last!

There’s a playfulness to these stunts that’s diminished in the later movies, where the focus shifts more and more to Cruise’s intensive training and the risks he subjects himself to. After Hanaway’s first appearance, Ghost Protocol kicks into gear with a prison break featuring Benji and Jane liberating Ethan from a Russian facility, creating chaos by letting nearly every prisoner out of their cells. There are no death-defying leaps, just well-choreographed brawls, set to Dean Martin’s jazzy “Ain’t That a Kick in the Head.”

Later, Bird draws on his animation background for a goofy sequence in which Ethan and Benji hide behind a giant screen that projects an image of a hallway, like the action-movie equivalent of Wile E. Coyote painting a tunnel on the side of a mountain to trick the Roadrunner. It’s ridiculous, but it works as a joyful combination of comedy and tension.

It’s a bit hard to believe now, but at one time there were rumors that Renner had been cast so that he could potentially take over the Mission: Impossible franchise from Cruise. Brandt gets his own tragic backstory that ties in with Ethan’s past, and he proves to be an asset to the team, even performing a maneuver that recalls one of Cruise’s iconic moments from the first Mission: Impossible movie.

One of the great things about Ghost Protocol is its showcase of the team, and it’s disappointing that Patton subsequently disappeared from the franchise, while Renner showed up in a diminished role in the next movie before also bowing out. Later installments are all about Cruise, but Ghost Protocol proves that the best missions need more than just a leader.

More like this
Culture
2 hours ago
Horror movies just don’t get more iconic than this
By Alex Welch
Culture
November 17, 2022
Before E.T., Steve Spielberg made this underrated sci-fi masterpiece
By Mark Hill
Culture
November 21, 2022
Roland Emmerich's most ridiculous movie isn't quite as funny as it used to be
By Mónica Marie Zorrilla
Related Tags
Share: