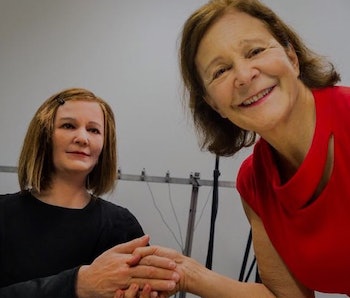 Nanyang Technological University in Singapore has developed a robot that looks you in the eye when speaking, and otherwise looks quite human.

Named “Nadine,” the device is known as a “social robot,” developed by scientists at NTU. It differs from conventional robots, the school’s website says, because Nadine has a singular personality that is affected and affects normal human life—as she, according to her creators, can get happy or sad, depending on the gist of a conversation. She can also recognize anyone she’s met before, and even remember what’s been said during past interactions.

Her very real-looking visage is due to being based on an actual person, Nanyang Professor Nadia Thalmann. Powered by software similar in design to Microsoft’s Cortana or Apple’s Siri, Nadine is intended to work as an assistant, or possibly serve as a companion for living breathing people who could use the company, like the elderly or youth involved in long-term care.