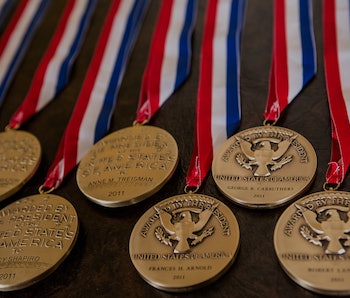 It is rare person who is considered both a pioneer in academia and has actually lived like a rough and tumble pioneer. Albert Bandura, a recent recipient of the National Medal of Science, is one of those people. He grew up in rural Alberta, Canada working on his family farm and repairing the remote highways of the Yukon before moving to the United States and becoming the fourth most-frequently cited psychologist of all time. Bandura’s work as a psychologist focuses on a common point of interest: why we do the things we do.

In his congratulations to Bandura, the only social scientist of the nine 2015 recipients of the National Medal of Science, Stanford President John Hennessy said that Bandura’s lifetime of work “learning how we can understand and change behavior has been instrumental in helping people around the world lead healthier, more productive and more peaceful lives.”

Bandura, who at 90 is a professor emeritus at Stanford University, first captured national attention in the 1960s with his experiments on learned violence and went on to become the first academic to prove that self-efficacy, people’s beliefs about their own capabilities, majorly affects how people feel, think, and choose. Credited with coining the term social cognitive theory and being the reason why many now accept that personalities are shaped by a combination of behavior, environment, and innate psychological makeup, Bandura appears to have a cheeky good humor unaffected by his fame. He’s known for signing his emails “May the efficacy force be with you” and, at first hearing of his impending award, joked that he thought it could be a prank staged by his colleagues.

Born on December 4, 1925 Bandura was raised by immigrant parents who encouraged him to explore the world outside of his circumstances.

“My parents encouraged me to expand my experiences,” he writes in his autobiography. “They essentially presented me with two options: I could either remain in Mundare, till the farmland, play pool and drink myself to oblivion in the beer parlor, or I might try to get a higher education. The latter option seemed more appealing to me.”

His path to become the “Brad Pitt of the psychological world” was an accidental one — he only took an introductory class because he needed a filler course. The academic road led him to Stanford in 1952 and in the early 1960’s he began a model study that soon became a topic of national conversation: the Bobo doll experiments.

In the Bobo doll experiments, Bandura showed children a short film of a woman beating up a Bobo doll — one of those dolls that has a weighted bottom so, upon impact, it pops right back up. After they watched the film and were free to explore a room of toys, the majority of the children went over to a Bobo doll, imitated the woman, and knocked it around. This experiment led Bandura to theorize that people aren’t inherently violent but become that way from learned behavior.

The Bobo doll experiment also resulted in an invitation for Bandura to testify before a Congressional committee about the potential effects of television on children — and led the Television Information Office, part of the National Association of Broadcasters, to publicly argue that his research should be totally disregarded. This ploy, however, wasn’t enough and the Federal Trade Commission used Bandura’s work as the backbone of new advertising standards that didn’t allow portrayals of children performing dangerous activities. The Bobo doll experiment was the catalyst for future academic findings on the relationship between exposure and reaction to violence, which in turn has led the National Institute of Mental Health, the American Medical Association, and the Surgeon General of the United States among others to agree that “exposure to violence is a significant risk factor in producing violence in those who witness it.”

Bandura’s work on self-efficacy, the groundwork of modern social cognitive theory (a theory named by Bandura), also produced numerous policy implications. A quick primer: self-efficacy is one’s belief that they have the ability to accomplish certain goals. Bandura developed the idea that self-efficacy influences one’s environments and outcomes because cognitive self-evaluations affects all factions of the human experience — how much time someone spends towards their goal achievement matters because it directly affects their behavior. Inspired by his work, in 1993 a scientific conference was held where young people met to discuss their personal efficacy to “meet the demands of a rapidly changing world.” Today government sponsored programs focused on self-efficacy are implemented around the world and focus on a wide-range of issues including alcohol abuse, preventing the spread of HIV, increasing the use of birth control, and empowering women — with Bandura as a consultant.

His work all comes back to the mechanisms that affect human behavior — what actually makes us tick in a world where most decisions appear to be all too random. It’s not often that social scientists are lauded for, as President Obama says, creating the solutions that solve “some our Nation’s biggest challenges” and “carry our country’s legacy of innovation forward.”

Bandura’s award comes at the end of a year full of rhetoric by various members of Congress who don’t understand why it’s important to financially support the social sciences. Looking at Bandura’s work it’s easy to see: the social sciences make for the map of achieving human enlightenment.