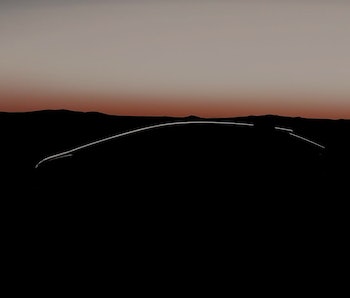 The latest video from Faraday Future, the secretive electric car company, has gone so far as to let slip a look at (what might be) a silhouette of one of its to-be-revealed vehicles:

The clip is bouncy — but aside from showing millennials relaxing, checking out a movie and shopping in the rain, there wasn’t much for those watching to see what FF plans to put on the road.

However, there is a question among the dialogue that asks “What if you didn’t so much own a car, as use one, whenever you need it.”

That could be a reference to the promise of an autonomous vehicle. FF Senior Vice President and co-founder Nick Sampson has said the Faraday plan involves “a car that, perhaps, just turns up, as you need it…you can just call it up on your phone, or pre-book it, or it’ll just know that you need it because you’re scheduled to go somewhere,” during a November interview with The Verge:

We do know they have a creative team of designers that have worked at well-known luxury car companies:

The company has made it clear it expects to have cars on the road in 2017. Back in July 2015, Motortrend wrote the FF battery will be a multi-cell solution like what fellow e-car company Tesla uses but offer 15 percent higher energy than what the Tesla Model S provides.

However, the company has been stressing its upcoming appearance at the Consumer Electronic Show on January 4, 2016 Las Vegas — a time when hopefully curious folk can finally know what the future holds for Faraday, a company that has in the meanwhile worked to show that their plan already comes with personality installed:

More like this
Innovation
8.9.2022 11:00 AM
This self-healing material could fix your dinged-up car in 30 minutes
By Molly Glick
Culture
8.6.2022 11:30 AM
20 years ago, Robert Rodriguez made the strangest sci-fi sequel of the early 2000s
By Jon Negroni
Innovation
8.1.2022 11:00 AM
This novel technology could jump-start electric vehicle production
By Molly Glick
Related Tags
Share: