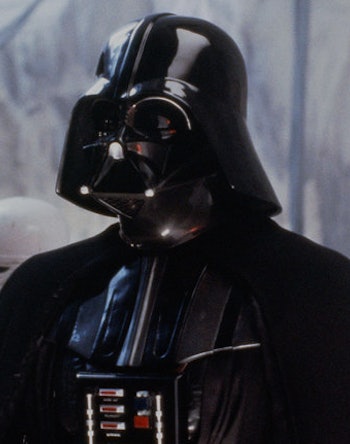 Presidential candidate Donald Trump has infamously called for the banning of all Muslims from entering the United States, but what would he have to say about Wookiees?

The poll, which was conducted online from December 10 to 14 from a sample size of 1,005 American respondents aged 18 or above, found that the great people of the United States of A seem to prefer the characters from the galaxy far, far away. So who specifically came out on top: The evil dark lord that has the potential ability to oppress millions — or Darth Vader?

We kid. But perhaps the most fascinating number off the bat is that Jedi master Obi-Wan Kenobi would win the presidential election hands-down if he were included on the ballot. (Not addressed in the poll is the possibility that Obi-Wan’s the actual villain of the Star Wars saga.)

Darth Vader, himself a leader of space Nazis, held the Millennial vote with 27 percent to the 18 percent gained by Trump’s pseudo-Fascist platform. Minority voters also preferred Vader to Trump with 26 percent of the vote to 13 percent. At least Vader wanted to include everyone to get his Death Star built.

On a lighter note, little green Jedi master Yoda captured 50 percent of the Millennial vote in a matchup against Hillary Clinton, who received 26 percent of the vote. However, Vader didn’t stand a chance against Clinton in a general public election, beating out the Sith-formerly-known-as-Anakin-Skywalker 32 percent to Vader’s 16 percent.

“Whether it’s due to this week’s release of Star Wars: The Force Awakens, or general disdain by Americans of their political system, this data suggests that the Jedi Order is vastly more popular than either the Republican or Democratic Party,” Chris Jackson, vice president at Ipsos Public Affairs, said in a statement. “As we have seen in much of the political data this year, our Republic is more fractured than in recent history,” Jackson continued. “However, it seems that the force could ‘surround us and bind the universe together.’” Man, this guy is good.

Does this poll have any real bearing on the presidential race? None whatsoever, but it’s still fun to imagine what the debates would be like between Vader and the rest of the Republicans (assuming Vader sided with a political party). We think it’d look something like this: