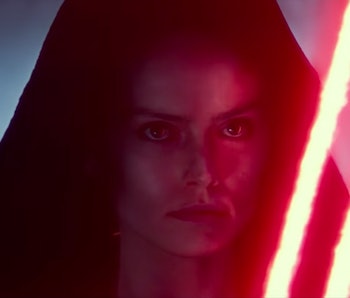 Star Wars: The Rise of Skywalker was a wild ride for Rey, revealing a totally new backstory for the sequels-era hero and tempting her with the Dark side before raising her up to the Light. However, one moment that the movie only hinted at could have been a dramatic low point in Rey’s story, according to recently leaked concept art from Rise of Skywalker.

At this point I shouldn’t have to say it, but: Spoilers below for The Rise of Skywalker.

In Star Wars: Episode IX, Rey learns she’s the granddaughter of Emperor Sheev Palpatine and rightful heir to the Empire. However, even before that big reveal, Rey admits that she’s having visions of herself on the Emperor’s throne. We never see those visions, though Rey is forced to confront a Dark side version of herself later in The Rise of Skywalker, but leaked concept art for the movie reveals what Rey might have seen, and it’s even darker than we ever imagined.

The images, which come from the Korean version of the official The Art of the Rise of Skywalker book, were shared on Twitter on January 17. They show a lot of fascinating concepts that didn’t make it into the movie, including Rey wielding Luke’s green lightsaber and a better look at Rey’s new yellow saber from the end of Rise of Skywalker. But right now, we need to talk about Rey’s dark vision.

In a two-panel piece of concept art, a character clearly identified as Rey by her triple knots hairstyle wields a red lightsaber that looks like a lot like Kylo Ren’s. In the first image, she approaches Kylo, who sits on a throne in a dark, red room. In the second image, Rey stands behind Kylo while holding a lightsaber to his neck. She’s seemingly moments away from beheading the son of Han and Leia.

Yeah, it’s pretty messed up. It’s also the kind of moment we wish made it into Rise of Skywalker, which only tells us about Rey’s vision but never shows it to us. Thankfully, you’ll be able to see this scene that never was when The Art of the Rise of Skywalker releases in March. Until then, check out this Twitter thread for even more concept art from the final film in the Skywalker Saga.

The Rise of Skywalker is playing in theaters now.