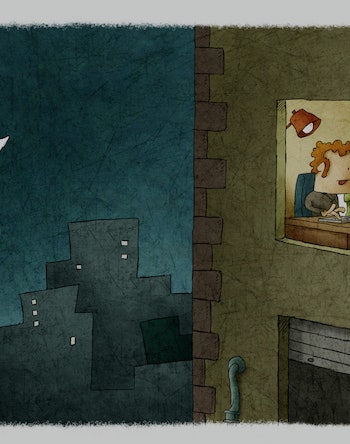 You wake up, and so do your devices. You’re tracking your sleep with a wearable, your phone sleeps next to you, you’re getting the news, private messages, and looking at photos of your friend’s vacation before you even leave your bedroom. Most of us never escape technology. It’s only going to get worse.

I was having trouble sleeping the other day. I was on Twitter from the moment I woke up to the moment I crawled into bed, and I realized I was having trouble turning my brain off because it was still on Twitter. I was thinking about the conversations I had had online that day and what certain people thought about me. I had Twitter-induced anxiety. I know many others have dealt with this problem.

Twitter hasn’t been all bad for me. It’s helped my career, and I’ve made friends through the website, but the more I thought about this issue I was dealing with, the more I wondered if I was making a deal with the devil.

11 hours: The average amount of time per day we spend consuming media content.

People are increasingly finding it difficult to log off, and that’s no accident. Our technology is designed to be addictive, to such an extreme degree that they spawned apps to keep you from using apps. Our brains produce dopamine — the chemical that makes you happy — when you get a like on Instagram or Facebook. This is very similar to how the brain responds to an addictive drug. The infinite scroll we see on social media tricks us into staying on the app for hours, because we’re not given time to consider if we should log off. There are many ways in which our apps have been designed to keep us logged on and wanting more.

Dr. Doreen Dodgen-Magee, a psychologist and author of Deviced! Balancing Life and Technology in a Digital World, tells Inverse that tech addiction plays out much like any other type of addiction.

“As the stimulation found in the digital domain becomes increasingly enticing, we need more of it to attain the same level of satisfaction that we once had with less,” Dodgen-Magee says. “This is similar to other patterns of addiction.”

Children are being exposed to these apps earlier and earlier. My two-year-old niece has already figured out how to use a touch screen. When you’re exposed to these addictive apps at such a young age, there’s little hope you’ll find a way to break that addiction later in life. According to Nielsen, the average adult spends roughly 11 hours per day consuming media content. That number could go up as more people who grew up with the iPad (release date: April 2010) reach adulthood.

“As tech creators are able to make their offerings more and more immersive with fewer and fewer natural ‘stopping points’… we will be even less aware than we are now of how dependent we have become.”

We’re not just addicted to apps, though. We’re addicted to technology broadly. We rely on smart devices — speakers, clocks, and lightbulbs are among the most popular — to make our lives a little easier throughout the day, and they really do. But anyone has ever experienced a blackout in the last decade — or just been in an office where the internet has gone down for 20 minutes — has quickly come to the realization that internet-connected devices run much of society.

Yet, technology is only becoming more ingrained in our daily activities. Take, for instance, the new Alexa devices Amazon announced recently. The smart glasses and a smart ring will let you take Alexa with you everywhere you go. Researchers at companies like Facebook are developing wearable devices that will literally be able to read your thoughts. We are going to become even more reliant on new technology, and it will soon be part of the most intimate aspects of our lives. I fear we’re not prepared for what this may mean for humanity.

“As tech creators, are able to make their offerings more and more immersive with fewer and fewer natural ‘stopping points’… we will be even less aware than we are now of how dependent we have become,” Dodgen-Magee says.

“We look to our devices to entertain, inform, and help us work. This makes us less hearty and resilient people.”

Social media addiction has been linked to an increase in depression and anxiety in young adults. Research has found our addiction to our phones causes similar psychological issues. If we’re already seeing these psychological effects, there is a real possibility we’re on a path to a much more dire situation.

“We are less likely to turn toward our own inner selves to soothe ourselves or to think critically,” Dodgen-Magee says. “Instead, we look to our devices to entertain, inform, and help us work. This makes us less hearty and resilient people. We also know that research shows a correlational relationship between high amounts of tech use and anxiety and depression.”

Suicide rates are the highest they’ve been in over 50 years. Surveys find about half of Americans feel lonely, and younger people feel the most alone. There is evidence our obsession with social media has made us more insular.

Maybe we’re screwed. I really don’t see us weaning ourselves off of technology in any significant way. Perhaps this is just a problem we have to deal with now. We may just have to find ways to reduce the harm tech is causing, but we’ll probably still be addicted. As someone who smokes and drinks too much, I know it is possible to live with your addictions, so maybe that’s where we’re at.

We keep striving for convenience and entertainment, but at what cost? We are more connected than ever, but more and more we feel completely removed from the world. We’ve designed our own torture devices, and until we address our addiction to technology and the ways it came about, the torture will continue.

Please contribute to my torture by following me on Twitter: @thor_benson.