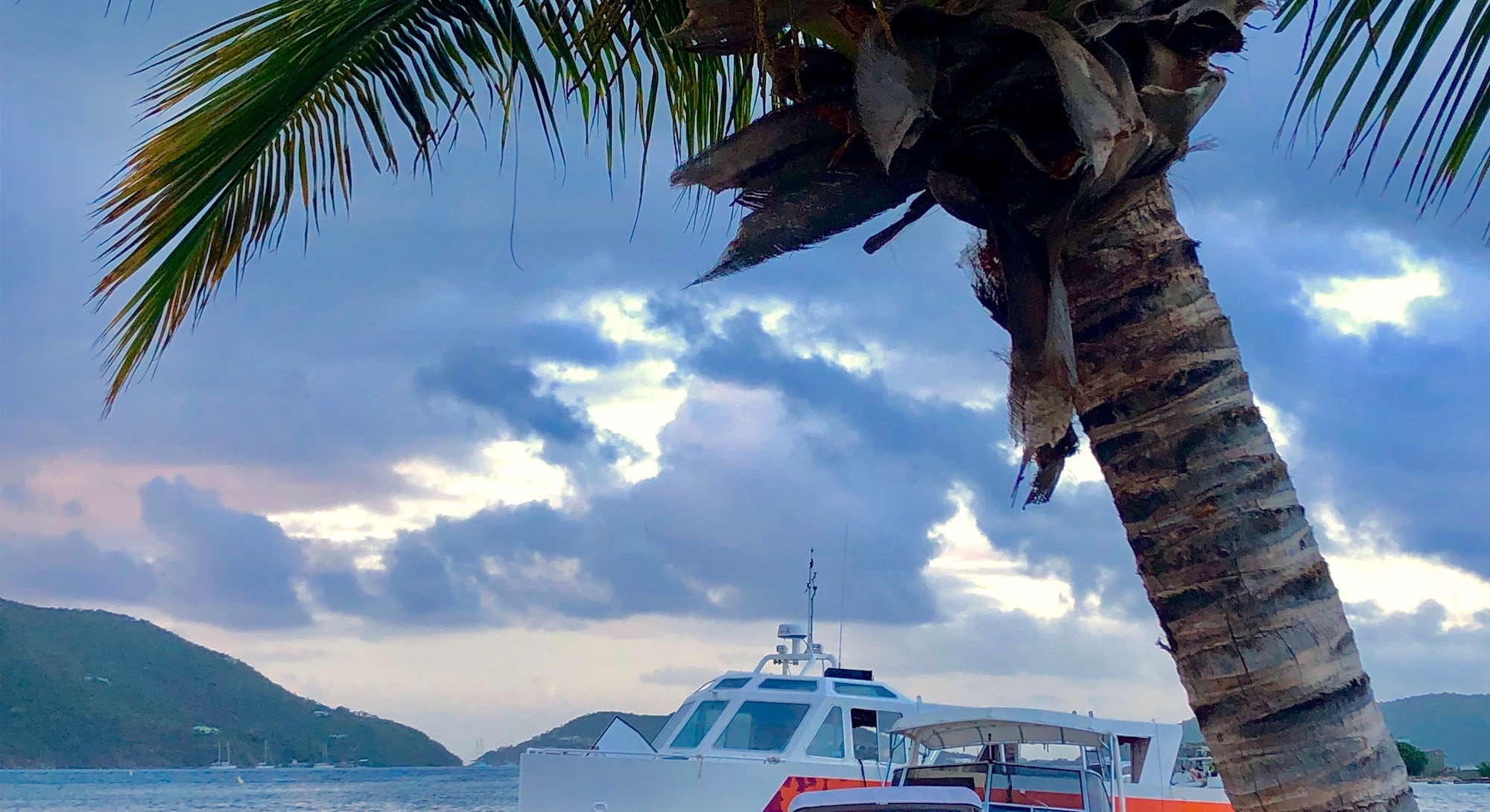 Every second, an amount of water the equivalent of 88 Olympic-size swimming pools flows from the Amazon River in Brazil into the Atlantic Ocean. The constant exchange from one natural world into the other creates benefits for water-dependent life, like the salt-water fish who feed on ocean plants nourished by Amazonian sediments.

But in recent years, the river has also carried something quite damaging. The result of what’s pouring into the ocean from the Amazon river is Sargassum, a genus of seaweed that floats in island-like masses. Left to rot in a mass amount, it can suffocate fish and induce vertigo. Often, it’s described as smelling of rotten eggs mixed with sea.

As a bird flies, the British Virgin Islands are some 2,500 miles away from the mouth of the Amazon in Brazil. The volcanic archipelago has always had some Sargassum seaweed present in its waters. But the nation’s relationship to the brown, buoyant macroalgae changed in 2011 when a massive bloom of Sargassum inundated the Caribbean Sea. Now Sargassum has breached the territory’s southern shores — an invasion that becomes worse when a hurricane hits. It’s an irritant to business, and a literal irritant to eyeballs.

Argel Horton, a marine biologist who works at the BVI’s Ministry of Natural Resources, tells Inverse that the seaweed “a constant element we’re fighting.”

Horton points out that, at first, it didn’t seem so bad to have so much Sargassum. It does come with some benefits — it can serve as a nursery and refuge to marine life like turtles, fish, and crabs, and provides nutrients for beaches.

“But when it comes in abundance,” Horton explains, “that’s when it gets a little frightening.”

"But when it comes in abundance, that’s when it gets a little frightening.

And what the British Virgin Islands possess is an abundance. They are not alone: What’s known as the Great Sargassum Belt extends from the Gulf of Mexico to West Africa. It is the world’s largest macroalgal bloom, and according to a Science study published in July, its recurrent status likely indicates “a new normal.”

It’s covered Florida’s southeast beaches and the shores of the Yucatan to the extent that the Mexican navy requested $23.8 million pesos from its government for the removal of Sargassum off the coast of Cancun.

So how did this problem, which became markedly worse in 2011, get so bad? Let’s go back to the Amazon River.

Chuanmin Hu, Ph.D. is a professor at the University of South Florida, and a co-author of the Science study on Sargassum proliferation. Hu and his team hypothesized that, in part, the 2011 bloom resulted from Amazon River discharge and continues to play a part in the continued prevalence of Sargassum. Overall, factors like the upwelling in coastal waters off West Africa, upwelling in the tropical Atlantic, and dust deposits have also influenced Sargassum blooms.

Over the past decade, churned among the organic bits that move through the Amazon River like fungi, seeds, and leaves, were heavy concentrations of fertilizer.

There’s so much fertilizer in the water in Amazon River because there’s so much deforestation in the Amazon. The trees are chopped down and replaced with farm fields, which are heavily fertilized to kick-start an ecological transformation from forest to industrial farm.

That deforestation exists, in part, because of efforts to turn parts of the Amazon into land that can be used to cultivate crops like soy and support cattle.

That deforestation is also why parts of the Amazon are burned this summer on a massive scale, igniting levels of destruction that will make recovery difficult. Researchers estimate that 15 to 17 percent of the Amazon is deforested, and is experiencing an 84 percent increase in fires compared to 2018.

Hu and his team’s calculations show that the nitrate concentration in the Amazon plume — the water linking the river and ocean — was much higher in 2018 than it was in 2010. Nitrate is an inorganic compound that occurs both naturally and synthetically. It is one of the most common groundwater contaminants in rural areas, and nitrate in groundwater originates primarily from fertilizers, septic systems, and manure storage.

The soil in the Amazon, while perfect for the 80,000 species that live there, lacks the nutrients needed to be good soil for cash crops like soy. So when farmers go to the Amazon, looking to takeover land for crops, they apply heaps of fertilizer to spur crop growth — despite the fact that, in the Amazon, fertilizers offer very little help.

Scientists believe this excess of nitrogen-rich fertilizer washes into the Amazon river, flows into the Atlantic Ocean, where it then fertilizes Sargassum. In 2018, the tropical bloom was 10 times the size of the 2011 bloom, totaling at 20 million tons. It’s predicted that by the end of 2019, it’s very likely that the volume of Sargassum will exceed the record set in 2018.

Back on the British Virgin Islands, Horton says it’s been an “educational journey” since the rafts of Sargassum wafted in back in 2011.

The island natural resources officials have learned “what to do, what not to do, when to leave it so it can be incorporated in the sand; when to actually step in, clean it, and move it along.”

That journey has had its ups and downs. The downs were most obvious when, in 2011, Horton saw that an abundance of Sargassum can deplete oxygen in the water when it decays.

“Because marine life needs oxygen, some were not able to survive,” Horton explains. “We had a lot of fish, sharks, and eels that ended up dying. That’s when we got a big understanding of the negative impacts of seaweed once it’s in a large quantity.”

"We had a lot of fish, sharks, and eels that ended up dying."

Right now she’s thankful that the majority of the Islands’ sea turtle population is in the northern area of the islands, where there’s less of Sargassum, which emits the strong, rotten-egg smell when it begins to decay. That’s because when the seaweed begins to decompose, a process that starts about 48 hours after it washes ashore, it releases hydrogen sulfide, a colorless, poisonous gas.

Because it’s in an outdoor environment, that gas hasn’t caused major health issues after immediate exposure. But that doesn’t mean it’s not causing any harm: Research recently conducted by the Tropical Disease Unit at Toronto General Hospital and the Harvard T.H. Chan School of Public Health determined that decomposing Sargassum releases ammonia alongside the hydrogen sulfide gas, which can cause respiratory, skin, and neurocognitive symptoms.

During an eight-month period of 2018, there were 11,000 cases of acute Sargassum toxicity reported on the neighboring islands of Guadeloupe and Martinique. The illness can cause heart palpitations, shortness of breath, dizziness, vertigo, headache, and skin rashes.

Luckily, in the British Virgin Islands, the problems have been less health related — but Sargassum is still a nuisance to daily life. As clumps along coastlines, the seaweed makes it difficult for boats to navigate the islands and both a physical barrier and a clog in propellers. It’s especially burdensome to fisherman, who have to not only deal with the boat issues, and the fact that if Sargassum goes into their fish traps, it can kill the fish if it’s not pulled out in time.

When it comes to tourism, taxi drivers are encouraged to hurry tourists to the Islands’ northern beaches, where there’s less of the stinky seaweed to be found. But a threat to tourism at all is the threat to many of livelihoods on the island: Tourism generates an estimated 45 percent of the nation’s annual income.

For now, the Ministry is requesting the aid of volunteers to help clean the beaches with rakes and wheelbarrows — Horton explains that “we’re trying our hardest not to introduce heavy machines on the beaches, because they would easily destroy them.”

It can feel like plugging up a hole in a dam with a finger. There is always more Sargassum, even if the beaches are cleaned, and the waters surrounded docks are cleared. And while concern about the situation is ever-rising, solutions are not clear. Ocean systems are dynamic and interlocked; what happens in South America affects neighbors to the north. The governments of the Caribean have discussed coming together to create management protocols and request funds, but that doesn’t stop fertilizer from entering the ocean.

The silver lining is that, once the seaweed is collected on the BVI, its loaded onto a truck, taken to the nation’s agricultural department, washed of its salt, and dried. Once dried, the Sargassum is grated into fine pieces, and shared with farmers who can use it as mulch.

“We’re trying our best to stop the situation,” Horton explains, “with the limited funds we currently have.”