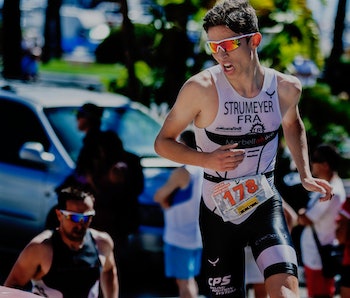 It’s well-established that exercise is essential, but it’s also possible to exercise too much. Overtrained endurance athletes perform like shadows of their former selves, struggling physically and emotionally to complete their training regimens, even in the absence of injury. This type of burnout takes a toll on the body, but new research indicates it begins in the brain and has striking similarities to a type of burnout shared by non-Olympians.

Generally speaking, exercise has positive effects on brain health and memory. But the results of a study published Thursday in Current Biology suggest that excessive exercise actually induces a type of fatigue in the brain’s “cognitive control” system. That cognitive control system is involved in the pursuit of long-term goals and helps override impulses in favor of making better decisions.

Mathias Pessiglione, Ph.D., a research director at the Pierre and Marie Curie University’s Brain and Spine Institute in France, tells Inverse that exhausted and overtrained elite triathletes show significant drop-offs in their cognitive control systems, and decreased brain activity in the lateral prefrontal cortex, an area of the brain that’s heavily involved in working memory and planning. Strangely, that pattern of decreased brain activity was also seen in his earlier work on normal people who were exhausted after performing demanding tasks as part of a workday.

"…overtraining could arise from a specific form of neural fatigue."

He explains that, taken together, there could be similarities between elite athletes who are overtrained, and people who are wiped out from working demanding jobs: Their brains are burned out in an oddly similar way.

“Our contribution was to suggest that overtraining could arise from a specific form of neural fatigue in the brain, which could also be induced by excessive intellectual work,” Pessiglione says. “This assumption was eventually proven to be correct.”

How overtraining messes with the brain

Pessiglione’s study was inspired by stories from the National Institute of Sport, Expertise, and Performance in France, an elite athlete training center. He explains that some athletes felt “overwhelmed by an intense sensation of fatigue” but neither the athletes nor the coaches had any explanation for why they were feeling so overwhelmed, and how it might be affecting their behavior outside of training.

To study exactly why these athletes were feeling this way, Pessiglione and his team took a group of 39 male triathletes and then overtrained 19 of them by increasing their training load by 40 percent for three weeks. Then, he took brain scans of all the athletes, and asked them to play an economics game where they had to decide between immediate rewards and long term rewards

At the end of the day, the overtrained athletes had less activity in the lateral prefrontal cortex, as he predicted. That’s the same area of the brain that showed decreased activity in his 2016 study on people who performed cognitively demanding tasks over the course of a workday.

That suggested that a huge uptick in workout load can cause changes in brain activity that influence cognitive control, but it was still unclear how those changes actually influence behavior. Ultimately, Pessiglione found that the overloaded athletes actually made more impulsive economic choices. They were less able to resist the temptation of an immediate reward in lieu of a more valuable reward down the road.

For endurance athletes, this means two things. For one, it’s harder to make good decisions after weeks of intense training. But it may also be hard to decide when to stop a potentially harmful training plan even if they know that backing off in the meantime can lead to greater rewards down the road.

For non-athletes, Pessiglione thinks these patterns of brain activity hone in on an outpost for burnout in the brain within the lateral prefrontal cortex. This study showed that excessive exercise is one “additional route,” but too much demanding cognitive work could be another way of achieving the same type of emotional and cognitive exhaustion.

Pessiglione and his colleagues write that: “Excessive physical training and intellectual work might both interfere with cognitive control and hence lead to burnout syndrome.”

Too much time on an exercise bike in the basement probably won’t lead to this level of neural fatigue. But one doesn’t need to be an elite athlete to know the feeling — while athletes can overtrain, everyone can still overwork.

Overtraining syndrome is a form of burnout, defined in endurance athletes by unexplained performance drop associated with intense fatigue sensation. Our working hypothesis is that the form of fatigue resulting from physical training overload might share some neural underpinnings with the form of fatigue observed after prolonged intellectual work, which was previously shown to affect the cognitive control brain system. Indeed, cognitive control may be required to prevent any impulsive behavior, including stopping physical effort when it hurts, despite the long-term goal of improving performance through intense training. To test this hypothesis, we induced a mild form of overtraining in a group of endurance athletes, which we compared to a group of normally trained athletes on behavioral tasks performed during fMRI scanning. At the behavioral level, training overload enhanced impulsivity in economic choice, which was captured by a bias favoring immediate over delayed rewards in our computational model. At the neural level, training overload resulted in diminished activation of the lateral prefrontal cortex, a key region of the cognitive control system, during economic choice. Our results therefore provide causal evidence for a functional link between enduring physical exercise and exerting cognitive control. Besides, the concept of cognitive control fatigue bridges the functional consequences of excessive physical training and intellectual work into a single neuro-computational mechanism, which might contribute to other clinical forms of burnout syndromes.

More like this
Mind and Body
12 hours ago
How to tell if you've been vaccinated against polio
By Katie MacBride
Mind and Body
8.13.2022 10:00 PM
How do you get monkeypox? An epidemiologist explains what “close contact” means
By Rebecca S.B. Fischer and The Conversation
Mind and Body
8.17.2022 6:05 PM
Does chewing gum burn calories? The answer may be hard to swallow
By Allison Parshall
Related Tags
Share: