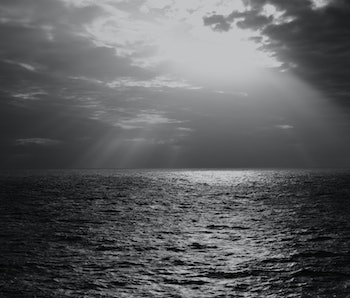 Hitting “airplane mode” before bed is the closest most of us ever get to achieving peace. Overstimulation — from our phones, laptops, and relentless Netflix queues — keeps us up at night and gives us panic attacks. What if there was a way to make it all just stop?

Turns out there is — at least, for 90 minutes at a time. Sensory deprivation chambers, also known as “float tanks,” allow you to immerse yourself in complete darkness and silence, giving your mind and body a chance to reset. It all sounds a bit extreme — and even a bit claustrophobic — but float spas are popping up all over the country. Keri Rackikas was inspired to start Halcyon Floats spa in Philadelphia after her first float relieved her long-running insomnia. Inverse asked her whether we all need more floating in our lives.

What’s going on in those tanks?

You get in the tank, and then you lay back. You imagine yourself drifting away. About 15 minutes in, theta waves start to kick in. Your blood pressure’s down. You’re entering a very relaxed, dream-like state. That’s the money spot. You want to just let that linger.

Theta waves are part of the sleep cycle. They’re associated with a meditation — a deep, deep relaxation. If you’re having a dream, it’s in the theta state. When you see a monk sitting there with a smile on his face, in silence, he’s in theta. And it takes years and years of practice to be able to achieve it that way. The cool thing about the tank is it facilitates it. You don’t have to do all the work to get rid of the sensory input.

What exactly are people floating in?

The solution is mostly Epsom salts. If you can imagine 280 gallons of water and close to 900 pounds of Epsom salts. It’s super dense. It’s five times more dense than the Dead Sea. We treat it with a small dose of hydrogen peroxide as an antimicrobial.

What are the actual physiological benefits of being in a float tank?

A lot of my customers say, “I can’t believe I have to go in a tank and be away from everything to relax.” There is science behind it.

When you go into the tank, you’re floating, so you don’t have that pressure of gravity on you. Your vertebrae are able to spread, your muscles, your circulation just increases. Your flow is happening — energy and blood — the way it’s supposed to. It’s balanced. You don’t feel the water, you don’t see anything, and you don’t hear anything. Your blood pressure decreases because you’re not responding to anything. Your cortisol levels — your “stress” hormones — they go down. You’re relaxing. And then your endorphins — your “happy” hormones — they reduce pain as well. Your happy hormones are flowing, and your stress hormones are going down. If you can imagine, it’s the ultimate relaxation. Everything that needs to happen is happening. It’s pressing a mental and physical “reset” button on yourself.

Why are so many people seeking out float spas?

In the U.S., we’re kind of set up for disaster with the food we have access to, the constant struggle with being overwhelmed at work, family, doing a million things at once. Technology — we’re always on our phones, watching TV. Add in the fact that our health is just poor. Taking medicine isn’t always the only answer. People are becoming more open-minded about different ways to treat themselves, be it illness or their sense of wellbeing.

You see that all over the place. Crossfit gyms are popping up left and right, and they’re not hungry for customers. Or yoga studios all over the place. Juice bars. People have this new perception of what they want in their life. They want to be healthy. Floating just fits in that wheelhouse. It’s a really simple way to reset yourself. Ninety minutes in the tank can be equivalent to six hours of sleep.

So what is floating intended to heal?

People go in there for all different kinds of reasons. Just to get away from everyday life. People go in there with concentration issues, anxiety, sleep issues. And we have artists that go in there because they feel like it increases their creative flow. There’s all kinds of stuff that can happen. You go in and get in touch with yourself.

We have athletes who come in. For example, the Philadelphia Union, they’re our professional soccer team. They float once a week. Not the whole team, but the starters do. They do it for recovery, concentration, just overall relaxation. They absolutely love it.

Do you still float?

If I have my way, I’ll get it in at least once a week. I’m learning that when I don’t have time to float is when I need to float the most.

What’s the story behind the name “Halcyon Floats”?

I just liked the way the word looked. But I looked into it to get a deeper understanding of what the word was. There’s a bird, in Greek mythology, called the Halcyon bird. The female character loved her boyfriend so much that the gods became jealous and sent him out to die at sea. She was so sad that she flung herself into the sea after him. The gods felt bad, of course, and they brought them back as the Halcyon birds. They’re actually based on the Kingfisher bird — and when people see these birds in the Mediterranean, they know the seas are calm, it’s safe to go out, and there’ll be ample fish. It means “calm waters.” I had to.

More like this
Innovation
8.12.2022 9:30 AM
Indoor lights make us sick — this technology could fix that
By Miriam Fauzia
Science
8.5.2022 1:00 PM
The most miraculous sci-fi movie on Netflix reveals a scientific debate over aging
By Tara Yarlagadda
Culture
8.15.2022 10:30 AM
Will the Corinthian return in Sandman Season 2? Comics reveal the answer
By Mónica Marie Zorrilla
Related Tags
Share: