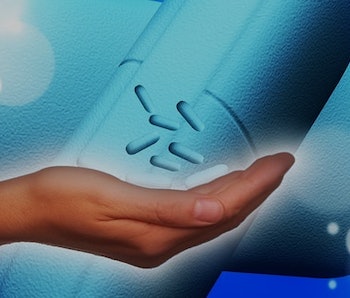 What it do, Inverse Daily fam? Kick off a wonderfully weird Friday with this unsettling illustration of a reverse centaur, then join me for a dive into today’s news.

— Saturday Night Live writer Julio Torres, on why the future of space travel depends on what’s going on politically.

Most of the time we spend talking about sharks is devoted to attacks on humans and the occasional souvenir they leave behind in the people they bite. But in the grand scheme of things, humans are hardly the victim in this scenario. Shark catches amount to approximately 1.4 million tonnes per year, Sarah Sloat tells me. That’s more than double than what is was 60 years ago.

Because of this, 60 percent of shark species around the world are now threatened. That may not seem like a big deal to beachgoers who are afraid of being bitten, but we’ve got to look at sharks in the context of a much larger marine food chain, where their role is often to pick off larger predators so that smaller animals can thrive. As a result of underregulated shark catches, those that do remain in habitats near human populations are, as concerned scientists report, shrinking dramatically. Global food security, they warn, may follow suit.

Learn what shark populations have to do with the food we eat.

There are a lot of things America needs from its next president. Opening up the government’s classified files on UFOs and aliens is not necessarily one of them, but Democratic candidate, Vermont senator, and occasional marjuana enthusiast Bernie Sanders told podcast host Joe Rogan on Tuesday that if he was elected in 2020, that’s exactly what he’d do. “My wife would demand that I let you know,” he said, regarding the aliens.

He’s not the first presidential candidate to promise they’d open up the X-files. In fact, it seems like just yesterday that Hillary Clinton promised she’d do the same, barring any threats to national security. (Barack Obama treated alien-talk as a joke.) With his eye on 2020, Peter Hess did us all the favor of asking experts from SETI — the Search for Extraterrestrial Intelligence — what Sanders would likely reveal if he won.

Find out what may be in store if the X-files are opened.

Let me start by saying that Inverse’s science team made absolutely zero jokes about a new study funded by Viagra’s parent company, Pfizer, suggesting that men with symptoms of erectile dysfunction (ED) tend to perform poorly at work. It was also totally not funny that Viagra is managed by a business branch of Pfizer called Upjohn. No; nothing to giggle about here.

The study draws a link between ED and metrics of poor work performance, namely absenteeism (missing work) and presenteeism (showing up to work but not being able to do the job). Funding aside, the study is not “too much of a stretch,” as Emma Betuel put it: ED is linked to a lot of other health issues, like hypertension, diabetes, and obesity, which could all feasibly impact performance both at work and in the bedroom.

Something to consider, however, is the timing of this study. Pfizer’s patent on Viagra expires in 2020, after which it’s expected to lose a lot of money to generic versions of the drug.

Find out what countries showed the strongest connection between ED and work performance.

Beat the “Sunday Scaries” with soothing science and relatable advice to get your mind & body ready for the week ahead.

Sprawled over a dusty plateau in the Chilean Andes, soaring 5,000 feet above the barren Atacama Desert, there’s an impressive array of radio telescopes charmingly referred to as ALMA. (Its full name, Atacama Large Millimeter/submillimeter Array, is a mouthful.) ALMA has the ability to peer not only into space but time. Its “sharp eyes,” as one scientist put it, can make out even the faintest glimmers of light emitted billions of years ago.

ALMA’s job isn’t quite like simply peering into the night sky and seeing stars. The universe is expanding, and as it does so, any light traveling long distances through it gets stretched out, making its wavelengths much longer than they were when they were emitted. ALMA doesn’t just detect those wavelengths; it also helps determine how much they were stretched out, giving a clear idea of how old that light actually is. As Scott Snowden tells me, ALMA recently spotted a whopping 39 ancient galaxies, born in the first 2 billion years of the now-13.7-billion-year-old universe.

Learn how scientists can tell how old those galaxies actually are.

You got a taste of just how funny — and wise — Julian Torres could be at the top of this email. Torres, the latest person to be profiled as part of Inverse’s Future 50 series, is the man to thank for some of SNL’s best and weirdest sketches in recent history, which include “Wells for Boys,” “Papyrus,” and “Melania Moments.”

More than just a humorous dude, Torres uses the comedian’s stage to bring attention to the Trump administration’s immigration policies, being himself an immigrant from El Salvador. You can catch more of his commentary in Los Espookys, HBO’s first Spanish-language show, which he co-wrote with Fred Armisen, as well as in a new special called “My Favorite Shapes.”

Read Jake Kleinman’s profile of Torres here and the comedian’s thoughts on wanting to die in space here.

Check out more Future 50 profiles below:

Today, that’s the depleted deep-sea corals off the coast of Hawaii, which, against all odds, are recovering.

What do you hope a future president will reveal about aliens? Let me know at yasmin@inverse.com

I got an injection, of fear from the abduction,

More like this
Mind and Body
Dec. 4, 2022
Sorry, stoners — doctors have bad news about the medical benefits of cannabis
By Filip Gedin and The Conversation
Mind and Body
November 28, 2022
This is how much you need to move to offset a day of sitting
By Elana Spivack
Science
November 23, 2022
NASA Perseverance rover's Mars landing site may have been too harsh for ancient life
By Kiona Smith
Related Tags
Share: