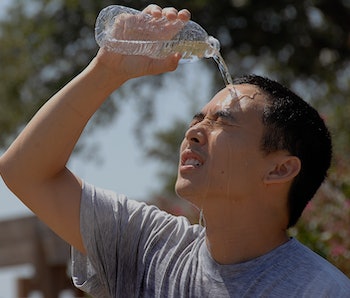 Record-breaking temperatures rattled Europe last month, contributing to a scorcher so hot it was declared the hottest June of the past 139 years. Now, climate scientists say July 2019 is on course to become the hottest month ever, and citizens across the Central and Eastern United States are preparing for a crippling heatwave. According to a new report from the Union of Concerned Scientists, these extreme heat events are not going away any time soon.

The UCS, a science advocacy organization, released its report alongside a peer-reviewed study published in Environmental Research Communications. Their work indicates that the amount of extreme heat Americans experience each year will only become worse. How much worse, however, depends on the degree to which we cut heat-trapping carbon emissions.

Senior UCS climate scientist and co-author Kristina Dahl, Ph.D., said Tuesday that this analysis “shows a hotter future that’s hard to imagine today.” She explained that if there is no action to reduce global emissions, conditions will be so extreme that on some days they would exceed the upper limit of the National Weather Service heat-index scale.

Today, these “off-the-charts” conditions only occur in the US in the Sonoran Desert, where fewer than 2,000 people live. But by 2065, these conditions could extend around the country, exposing millions of people to days when temperatures reach 127 degrees.

The report and study are centered on an analysis of where and how often in the contiguous US the “feels like” temperature is expected to top 90, 100, or 105 degrees Fahrenheit between future April-to-Octobers — as well as the “off-the-charts” days. The frequency of these temperatures and the population exposed to them were established using climate models that incorporated varying levels of heat-trapping emissions to account for potential future climate action scenarios.

The models demonstrated that every tenth of a degree we avoid in increased temperatures will limit the increase in extremely hot days we are expected to see. However, the results also show that if no action is taken to reduce heat-trapping emissions, by midcentury (2036 to 2065) in the US, the number of average days per year with a heat index over 100 degrees Fahrenheit will double from historical levels. That would be 36 days. Meanwhile, in the same period, the average number of days with a heat index above 105 degrees is expected to quadruple to 24.

People interested in seeing how their own cities will fare can use this tool, put together by the UCS from this study’s data.

While individual cities may differ in the number of scorching days they experience each year (New York is expected to have 18 days over 100 degrees by midcentury, for instance, while Chicago is expected to have 26), all Americans will experience more days of dangerous heat within the next few decades and beyond.

“Climate change and its consequences are already manifesting in the form of deadlier storms, rising sea levels, droughts, wildfires and floods,” the report states. “Yet the heat extremes forecast in this analysis are so frequent and widespread that it is possible that they will affect daily life for the average US resident more than any other facet of climate change.”

In turn, experts are concerned that in many places, this extreme heat will lead to an increase in deaths or illnesses, force people to stay inside, and drive people to move away from areas that become too inhospitable to humans. In other words, extreme heat could disrupt long-standing ways of life. Hot temperatures cause us to become dangerously hot, and extreme conditions prevent us from subsequently cooling off once our core temperatures rise.

“By the end of the century, on most days between April and October, construction workers in parts of Florida won’t be able to safely work outside during the day because the heat index would exceed 100 degrees,” said Dahl. “Likewise, agricultural centers such as Illinois and California’s Central Valley could struggle to keep farm workers safe, with the heat index exceeding 90 degrees and 100 degrees, respectively, for the equivalent of about three months a year.”

The authors emphasize that the best ways to avoid the worst impacts are to enact policies that rapidly reduce global warming emissions. Pushing states toward operating at 100 percent clean energy, they argue, could keep the worst at bay.

In the meantime, communities and workplaces need to prepare: Extreme heat is happening now, and to survive we will have to adapt.