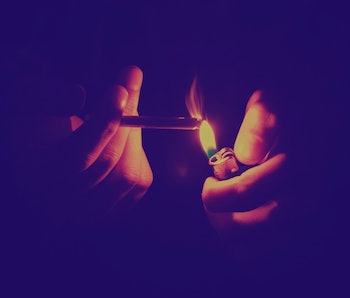 Anti-drug advocates have long claimed cannabis is a “gateway drug,” leading inevitably to harder drugs. Cannabis activists have argued the opposite, saying that it can help people get off of harder drugs, like those fueling the current opioid overdose crisis. Each of these rationales have been used to push pro- and anti-cannabis legislation, but research in Proceedings of the National Academy of Sciences published Monday suggests that the relationship between legal marijuana and opioid deaths is far more complicated than either of these two claims suggest.

Chelsea Shover, Ph.D., a postdoctoral research fellow at Stanford University School of Medicine and the study’s first author, tells Inverse that this reversal suggests there may not be a direct connection between medical cannabis laws and opioid overdose deaths.

“I think the most logical explanation is that these two things are not causally related,” she says. “We saw an association before, we see the opposite now. We don’t think cannabis was saving people before and killing people now. We think these are two unrelated things.”

Shover and her colleagues embarked on this research in the hopes of replicating the results from the 2014 study in a different time period. They had the added benefit of data from the subsequent seven years, during which many more US states had legalized medical cannabis. As of 2017, 45 states had medical cannabis laws on the books, so if the pattern from that 2014 paper held true, this analysis would show it.

In 2010, the states that had legalized medical cannabis — California, Oregon, Washington, and Colorado, for instance — were generally pretty different from the rest of the country.

The other possible reason for this change is even simpler: There’s no relationship between them.

Shover is careful to note that these findings are about populations and not individuals.

“Because it’s an ecological study, we’re not making recommendations about what an individual might do,” she says. “We’re not even commenting on the potential therapeutic effects of cannabinoids or medications derived from cannabis. It doesn’t make sense based on our study for an individual to say, ‘This is how I’m going to treat my pain.’”

But she says it does make sense to use this research to scrutinize claims from the cannabis industry or from policymakers. Shover and her co-authors hope that this research will contribute to improving public health policy focused on the opioid overdose crisis in the US, which is getting worse every year.

“This is the most important health problem of the day, arguably,” she says. “Any time we focus on strategies that don’t work is time we’re not focused on strategies we know do work — things like providing naloxone (the opioid overdose reversal drug), lowering barriers to treatment, and reforming incarceration.”

When it comes to solving the opioid overdose crisis, Shover points out, the role of science isn’t to support a social agenda but to help plot the most promising ways forward.

“As scientists, when we find something that isn’t working, it’s our job to report it. This isn’t a comment on the pros and cons of cannabis legalization.”

Abstract: Medical cannabis has been touted as a solution to the US opioid overdose crisis since Bachhuber et al. [M. A. Bachhuber, B. Saloner, C. O. Cunningham, C. L. Barry, JAMA Intern. Med. 174, 1668–1673] found that from 1999 to 2010 states with medical cannabis laws experienced slower increases in opioid analgesic overdose mortality. That research received substantial attention in the scientific literature and popular press and served as a talk- ing point for the cannabis industry and its advocates, despite caveats from the authors and others to exercise caution when using ecological correlations to draw causal, individual-level conclusions. In this study, we used the same methods to extend Bachhuber et al.’s analysis through 2017. Not only did findings from the original analysis not hold over the longer period, but the association between state medical cannabis laws and opioid overdose mortality reversed direction from =21% to +23% and remained positive after accounting for recreational cannabis laws. We also uncovered no evidence that either broader (recreational) or more restrictive (low-tetrahydrocannabinol) cannabis laws were associated with changes in opioid overdose mortality. We find it unlikely that medical cannabis—used by about 2.5% of the US population—has exerted large conflicting effects on opioid overdose mortality. A more plausible interpretation is that this association is spurious. Moreover, if such relationships do exist, they cannot be rigorously discerned with aggregate data. Research into therapeutic potential of cannabis should continue, but the claim that enacting medical cannabis laws will reduce opioid overdose death should be met with skepticism.