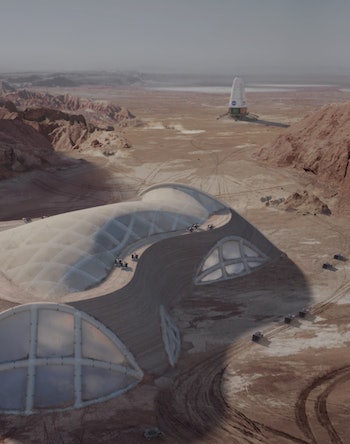 The fact that Dubai has big plans for a Mars city is fitting, as its skyline is already out of science fiction. Its space-age skyline includes the Burj Khalifa, the world’s tallest structure that wouldn’t look out of place on a sci-fi novel’s cover. But if Dubai is serious about colonizing Mars, it will have to re-think its approach to building entirely: In the extraterrestrial cities of tomorrow, designers may have to think less vertically:

While towering glass skyscrapers cut an impressive image on terra firma, the tough environment of Mars will require something a bit flatter, less complicated, and much more sustainable. Dubai and Mars are both desert landscapes with extreme temperatures at opposite ends of the scale, making glass skyscrapers that let in and out lots of heat quite a bad idea. But while infrastructure-abundant Earth can support such decisions for the sake of design, a misstep on Mars could jeopardize the whole project.

Much like the need to avoid overindulgent designs, inhabitants will also have to think smarter about how to use resources. Recycling may be an architectural buzzword on Earth, but humanity generally takes a lax attitude to the concept of overconsumption and waste. But considering the amount of rocket fuel needed to move such a single kilogram through space, Mars designers won’t have the luxury of wasting any resources in construction.

"“Think of it as if you only had mud to build with."

This all means that the Martian surface will need to be populated using functional, flat structures that make the most of available resources and blend into the landscape as a result. It will also lead to architecture with a more utilitarian focus, as humans will need to avoid high levels of radiation and establish simple life support systems.

The builders of Earth cities are free to have other considerations, like how to dazzle with ambitious monuments that demonstrate humanity’s abilities to defy the forces of nature. On Mars, where humans will struggle to even survive, an entirely new kind of architecture may be required that instead prides itself on its ability to defy the elements and help humans actually thrive.

Here’s what they could look like, according to one of the few mainstream architects in the world that has seriously studied the problem:

The above designs were created by the Hassell Studio, who designed its 3D-printed habitats as part of a $3.15 million NASA and Bradley University challenge last year. The flat humps are designed to use existing Martian resources to build a habitable space that also offers a place for the explorers to socialize — a feature that may be crucial for helping these early Martians avoid crippling cabin fever.

The competition, which saw teams submit hole-covered towers and greenhouse-inspired domes, awarded $500,000 in May to AI. SpaceFactory.

These designs are supposed to help Mars explorers understand the limitations they will face in their mission to create a sustainable colony on Mars. Elon Musk claims SpaceX could build one as soon as 2050, while Dubai has opted for 2117 in its estimates.

As talk builds up of how to plan humanity’s first extraterrestrial city, Inverse spoke with Hassell’s head of design technology and innovation Xavier de Kestelier to find out more about how these cities may look.

Inverse: Your team’s design imagines a habitat built using the materials on the planet and the vehicle landing on Mars. Could you explain more about the materials in use and how they differ from those used in Earth-based projects? Are the materials easy to find?

De Kestelier: On Mars, we can’t use high-end construction materials such as steel and aluminum because we don’t have the manufacturing facilities to extract them from the raw ore that we could mine. The most basic thing to do would be to take regolith, Martian dust, and sinter or microwave it together as a construction material. Just simply adding raw material layer by layer on top of one another. Think of it as if you only had mud to build with, the only thing you would be able to do is build a mud hut, layer by layer.

On Earth, it is completely different as we have complete manufacturing industries available through which we can deliver all sort of construction materials such as metals, clays, cement, plaster, plastics etc. On Mars we only have one basic material we can work with, and that is raw Martian regolith.

How long would construction take and would the team need building training before they went to Mars? Presumably this team would look quite different to the team for an Earth-based project!

On Mars there are similar environmental factors to Earth, the only difference being that they are more extreme. For example, on Earth we would need protect interior spaces from too much direct sunlight. One way to do that would be by shading the façade with louvres. On Mars we would also need to protect us from direct sunlight, the big difference being that on Mars, the Sun will expose you to high levels of radioactive gamma radiation as there isn’t a magnetic field to protect us. The radiation from the Sun will affect our astronauts quite badly. The worry won’t be the glare or the heating up of the building, it’s really about life or death.

However, other environmental factors will have much less of an impact on Mars - wind for example. There are indeed high-speed wind and storms that often engulf the planet. But on Mars, a 200km/h wind will feel like a light breeze, because the atmosphere on Mars is 100 times less dense then compared to on Earth. Remember the first scene in The Martian where Matt Damon is blown around in a massive storm? That’s probably not that accurate as he would have barely felt a breeze.

With these low wind pressures, we can design buildings and structures on Mars that don’t need to respond to too much lateral wind forces.

The project looks at both functional aspects while also providing comfort. Could you tell me a bit more about how this factored into the design, and how you avoid issues like cabin fever for a team that cannot easily leave the building as they would do on Earth?

"“How do you have public space within a completely connected habitat and sealed?"

We need to create a level of protection from the radiation and the sun, but at the same time we wanted to create some views for the astronauts. We have created an internal courtyard where, although the sun can’t reach the pods themselves, it does get indirect light. The added benefit is that the astronauts can look across the courtyard into the other pods giving them a long distance view from within the habitat, which I think is an added advantage.

Elon Musk says he wants to see a city on Mars by 2050. Could this project work as a blueprint for future expansion into a city? How might construction differ from the initial habitat?

It might not be a blueprint, but I think it will show the difficulty and constraints that we’ll have in designing habitat on Mars. You often see huge glass domes in Mars or Moon architecture proposals, which would obviously not be possible. The radiation levels would be too much.

When designing a city instead of just a base, we will need to start asking ourselves different questions. How do you create communities? How do you create public life? These are really big questions and I don’t know how to solve that just yet in a Martian environment. We would have to look at it all very carefully, probably from a technical perspective but also by studying how our best cities on Earth operate. I think the idea of having public space is very interesting — how do you have public space within a completely connected habitat and sealed?

The project seems to focus on using Martian resources to build a habitat. How may using different materials to Earth-based buildings alter the design of a whole city? Would we see tall glass-scapes like we would on Earth, or would it take a new approach? Are skyscrapers even possible on Mars?

Well, I think it would take a completely different approach as we are using the shell on the outside, as protection and shelter are paramount. A cave is probably the best typology for living on Mars. I think glass skyscrapers would be a very bad idea, but then again glass skyscrapers are often a pretty bad idea for Earth as well. In really hot countries, there is no reason to start building tall skyscrapers made out of glass. We cannot make the same mistakes on Mars as we have on Earth.

As an architect, is there anything about the unique challenges of designing for Mars that excite you? How may the industry adapt under these new conditions? Could we see new movements develop on Mars, maybe it’s own version of Brutalism?

For me the most exciting thing when designing something for Mars is that you have to be so careful with resources. Imagine for every kilogram that you bring to Mars you have to have 300 kilograms of rocket fuel and support to actually get it there and be able to land it on Mars. Anything that you have brought with you, you will need to use it, reuse it or remake it into something else so that it has a second and third life. It is a really interesting way of thinking as you would have to have a complete circular economy on Mars because there would be no supply missions. Whatever you have with you, you will have to survive on. I think that is a really good lesson to learn because it’s often in architecture that sustainability, recycling and reusing is seen to be the “nice” thing to do, but on Mars it would be a matter of life or death.