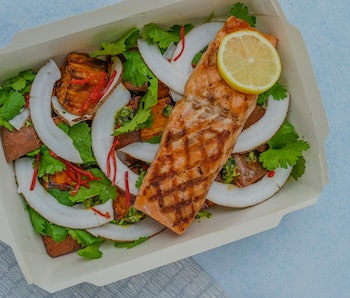 Compostable takeout containers seem like a great solution for reducing the waste of an on-the-go lifestyle, but they can create all-new problems. The “compostable” label may make these products sound like they’re all-natural, like they’ll simply decompose and return to the Earth once we’ve finished eating our lunch from them, enriching the soil and feeding the trees. Reality is a lot more complicated, though. New research in the journal Environmental Science & Technology Letters shows that some inconspicuous chemical ingredients used in compostable takeout containers can find their way back into the soil.

In a paper published on Wednesday, a team of researchers at Purdue University analyzed compost samples and showed that compost with takeout containers in it had significant levels of per- and polyfluoroalkyl substances (PFAS). PFAS are a class of chemicals used to make materials water- and grease-proof — crucial qualities for a food takeout container. Unfortunately, PFAS break down into a variety of chemicals, some of which are linked to cancer (PFOA) and thyroid hormone disruption (PFOS), according to the US Environmental Protection Agency.

As luck would have it, both of these PFAS were detected in the compost samples. Since compost is used to grow food, and since PFAS can persist in plants and move through the food chain all the way up to humans, compostable food containers could pose health risks. So despite the fact that they appear to help close the loop on a notoriously wasteful part of our consumer culture, they are simply not the sustainable option they once appeared to be.

The study’s authors collected 10 compost samples from around the country — Washington, Oregon, California, Massachusetts, and North Carolina — nine of which were from commercial composting facilities, and one of which was from a backyard compost bin. While PFAS were detected in all of the samples, including those that were just household scraps and those made of lawn waste, the samples that included food packaging had much higher levels — 3.9 to 7.6 micrograms per kilogram for the former versus 31 to 75 micrograms per kilogram in the latter.

Perhaps most notably, even though several PFAS have been phased out of food containers over the past decade, PFOA and PFOS were both present in significant quantities. The study’s authors note that these results should help inform a new way forward for these materials.

“Composting yard and food wastes, including compostable food packaging, creates a nutrient rich soil amendment and reduces the amounts of wastes going to landfills or incineration, but steps need to be taken to minimize unintended negative consequences,” they write.

In that relatively small study, Whole Foods came out looking the worst, with 5 out of 17 products showing evidence of PFAS. Sensitive to these results, Whole Foods has reportedly taken quick action.

“We’ve removed all of the prepared foods and bakery packaging highlighted in the report,” a representative tells Inverse.

“Whole Foods Market introduced compostable containers to reduce our environmental footprint,” they added. “When new concerns about the possible presence of PFAS emerged we took immediate action and removed all prepared foods and bakery packaging highlighted in the report. There is limited availability of environmentally responsible packaging made without this substance, and we’re actively working with our suppliers to find and scale new options.”

That being said, simply shuffling materials around may not be an end-all solution since PFAS are so persistent in the environment.

For the time being, though, the best option for the mindful consumer who’s short on time is probably just to avoid paper- and cardboard-based takeout containers that need to be treated to be waterproof.

Abstract: Composting the organic fraction of municipal solid waste (OFMSW) creates a nutrient rich soil amendment and reduces the amounts of wastes going to landfills or incineration. However, the occurrence and fate of persistent and challenging per- and polyfluoroalkyl substances (PFAS) in OFMSW composts have not been well studied. The loads and leachability of 17 perfluoroalkyl acids (PFAAs) were analyzed in nine OFMSW commercial composts and one backyard compost. PFAA loads ranged from 28.7 to 75.9 μg/kg for OFMSW composts that included food packaging and from 2.38 to 7.60 μg/kg for composts that did not include food packaging. Perfluorooctanoic acid (PFOA) and perfluorooctanesulfonate (PFOS) were detected in all composts; however, OFMSW composts were dominated by short-chain PFAAs (>64%) and perfluoroalkyl carboxylates (PFCAs, >68%), particularly the C6 PFCA. The total oxidizable precursor assay indicated the presence of PFAS precursors in three OFMSW composts for which 6:2 fluorotelomer sulfonate and 6:2 dipolyfluoroalkyl phosphate ester were identified. Of the total PFAA load in the composts, 25−49% was released to porewater (∼1 g/2 mL). PFAA porewater concentrations versus PFAA loads as well as organic carbon-normalized sorption coefficients versus the number of PFAA CF2 units are strongly correlated (R2 > 0.85).

More like this
Science
7.30.2022 7:00 PM
The latest deadly threat to polar bears? Your trash
By Thomas Scott Smith and The Conversation
Science
8.5.2022 6:00 PM
How is nature connected to well-being? It's complicated, scientists say
By Tara Yarlagadda
Mind and Body
7.28.2022 9:19 PM
A deadly disease-causing bacteria was detected in US soil samples — here's what you need to know
By Katie MacBride
Related Tags
Share: