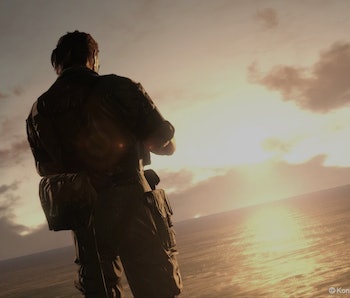 It’s also the awkward, forced goodbye from its creator, Hideo Kojima. The game auteur, who had long been a Konami loyalist was unceremoniously booted earlier this year for reasons that remain super unclear. It was a nasty breakup and neither party is talking. The destruction left in the wake of Kojima’s exit is substantial and includes the cancellation of the hotly-anticipated Silent Hills. This trailer is the last thing Hideo Kojima did and probably his last involvement with Metal Gear Solid.

And it’s got that operatic quality Kojima brought to his work, that amped up compromise between Oscar-bait thinking and “Street Fighter” cinematography. There is more swagger than joy and more aviators than wayfarers. The worldview is comical, but seriously militaristic. It’s fun, but not overly so.

And let’s not kid ourselves, Metal Gear Solid never made much sense. Even this trailer, reminiscing all the way back to the first MGS from 1998, didn’t bother to explain the who, where, or the what the hell of the thing. Longtime fans are familiar with the references, but even they don’t really get the deeper meaning — if there ever was one.