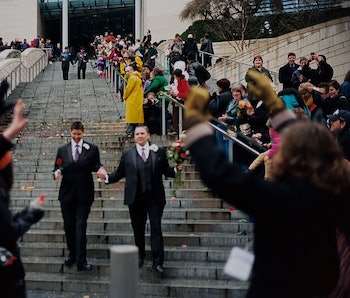 American acceptance of same-sex marriage has evolved tremendously over the last two decades. In 1999, just 35 percent of Americans polled believed that same-sex marriage should be legalized. By 2018, that number jumped to 67 percent. This change in opinion, a new study shows, was likely influenced by the legalization of same-sex marriage — a result that suggests people will accept what the government says is normal.

A team of researchers reported Monday in the journal Proceedings of the National Academy of Sciences that the legalization of same-sex marriage on a state-by-state basis decreased anti-gay bias at a rapid rate. This result held true across the 35 states and Washington, D.C., which legalized same-sex marriage in some form before the US Supreme Court ruled that marriage was a fundamental right for all in 2015.

However, a sharp contrast emerged across the 15 states that did not pass same-sex marriage locally before the Supreme Court ruling. In these states, there was a reactive “backlash” effect, in which the federal legalization was associated with increased anti-gay bias — despite the fact that there was decreasing levels of bias in these states before the ruling.

Study co-author and McGill University assistant professor Eric Hehman, Ph.D., tells Inverse that, while his team’s data can’t explain the backlash, he suspects that this bias has evened out and maybe even declined in the last couple of years. It’s likely that a federal decision increased people’s perception of a symbolic threat to their values, and in turn, this perceived threat exacerbated anti-gay bias.

“Our interpretation of this is that individuals in these areas may feel that the federal policy passed does not reflect the local will of the people, so there may be a temporary backlash effect,” Hehman says.

This study incorporated two large surveys designed to measure implicit and explicit anti-gay bias. The first set of data included the responses of 949,664 people who completed Project Implicit surveys between 2005 and 2016. Hehman and his team also examined the American National Election Studies (ANES) dataset, which included 10,870 respondents from 2008, 2012, and 2016. Both of these surveys asked participants the extent to which they felt “warmth” toward gay and lesbian people.

The researchers write that these results indicate that “government legislation can inform attitudes even on religiously and politically entrenched positions.” Previous studies show that people modify their views and actions to align with the perceived norms of their environment. This study shows, in some cases, the government has the power to establish a sense of what’s normal, which in turn becomes what’s accepted.

“I think it is important for policy makers to know that laws passed can impact individuals’ attitudes about social groups,” Hehman says. “Here, this is a situation in which a law generally decreased bias, but the reverse could also be true, in which laws targeting certain social groups might increase the bias against those groups.”

Historically, we’ve seen these results before. Hehman and his colleagues write that there was a 60-percent increase in support for interracial marriages after they became legal, and that more recently, since the election of President Donald Trump, there’s been a reported increase in the “acceptability of prejudice toward stigmatized groups.”

Attitudes, it appears, are malleable — and there’s power in what the government chooses to endorse. People are particularly influenced by their local governments, and these attitudes and legislation can reinforce each other. This study finds that before 2015 attitudes towards the gay community were improving, but actual legalization served as a major catalyst, influencing ever-changing opinions.

The current research tested whether the passing of government legislation, signaling the prevailing attitudes of the local majority, was associated with changes in citizens’ attitudes. Specifically, with ∼1 million responses over a 12-y window, we tested whether state-by-state same-sex marriage legislation was associated with decreases in antigay implicit and explicit bias. Results across five operationalizations consistently provide support for this possibility. Both implicit and explicit bias were decreasing before samesex marriage legalization, but decreased at a sharper rate following legalization. Moderating this effect was whether states passed legislation locally. Although states passing legislation experienced a greater decrease in bias following legislation, states that never passed legislation demonstrated increased antigay bias following federal legalization. Our work highlights how government legislation can inform individuals’ attitudes, even when these attitudes may be deeply entrenched and socially and politically volatile.

More like this
Culture
8.16.2022 10:00 AM
Dracarys! 7 crucial questions about House of the Dragon answered
By Robin Bea
Entertainment
8.16.2022 10:30 AM
Original 'Obi-Wan' plan would have changed Luke Skywalker forever
By Ryan Britt
Gaming
22 hours ago
After Nintendo, Reggie Fils-Aimé wants gamers to give the metaverse a chance
By Tom Caswell
Related Tags
Share: