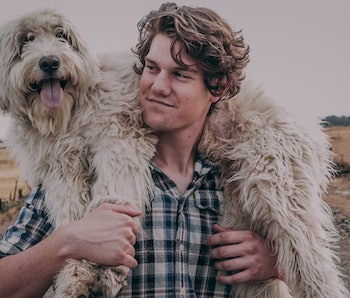 Things are not going so great for man: Over the last 80 years, human sperm quality has declined by half. And the sperm of man’s best friend isn’t doing so hot, either, with studies showing their sperm motility has declined by over 30 percent throughout the last 26 years. Now, a study published Monday in Scientific Reports links these seminal events, revealing that environmental contaminants are at least in part to blame.

Scientists from the University of Nottingham determined that two man-made chemicals affect the quality of both human and dog sperm: one called DEHP and the other industrial chemical polychlorinated biphenyl 153 (PCB153).

The former, added to make plastics flexible, is widely abundant in household items as diverse as carpets and toys. PCB153, meanwhile, has been used in plasticizers, surface coatings, and paints. It’s now banned globally, but it remains widely detectable in the environment, say the researchers. Notably, both chemicals have been detected in commercially available dog food.

Co-author Richard Lea, Ph.D., an associate professor of reproductive biology at the University of Nottingham’s School of Veterinary Medicine and Science, tells Inverse that he and his team previously determined it’s the dogs who share our homes that have suffered a decline in sperm. This led them to hypothesize that the chemical pollutants in our homes and general environments could be the cause.

“The dog, therefore, seems to mirror what we see in the human and, a bit like a ‘canary in the coal mine,’ provides a way of monitoring chemical effects in humans,” Lea explains. “It was important to test this idea by looking at the effects of the two chemicals on sperm. This study has demonstrated similar effects in both man and dog.”

To test the hypothesis, they collected nine samples of human semen and 11 samples of dog semen, and then incubated them in a lab together with PCB153 and DEHP. They applied these chemicals in concentrations previously detected in sperm from dogs undergoing routine reproductive assessments, the idea being that the amount used would mimic the amount naturally encountered in a home.

Now, Lea says, the natural next questions to ask are how these chemicals affect females and how geography affects chemicals in sperm and sperm quality. The study posits that, because these environmental pollutants are a large part of Western industries, it’s possible that location determines the extent to which males are affected. Other studies have pointed out that the so-called world sperm decline hasn’t been seen among those living in Asia, Africa, or South America, lending support to the idea that it may be a predominantly Western problem.

Chemical pollutants may not be the only factors driving the downfall of sperm. Other studies have argued that factors like air pollution and obesity could also be to blame, but the shared impact on dogs and humans adds to the idea that human-made chemicals can disrupt the chemical messenger system controlling hormones. Pet dogs and humans live in the same domestic environment, so it’s reasonable to say the same exposure to household contaminants affects their sperm.

“Demonstrating such effects of chemicals at environmental concentrations raises awareness of these pollutants,” Lea says, “and my hope is this will lead to steps in our personal lives to reduce or at least limit further exposures.”

A temporal decline in human and dog sperm quality is thought to reflect a common environmental aetiology. This may reflect direct effects of seminal chemicals on sperm function and quality. Here we report the effects of diethylhexyl phthalate (DEHP) and polychlorinated biphenyl 153 (PCB153) on DNA fragmentation and motility in human and dog sperm. Human and dog semen was collected from registered donors (n = 9) and from stud dogs (n = 11) and incubated with PCB153 and DEHP, independently and combined, at 0x, 2x, 10x and 100x dog testis concentrations. A total of 16 treatments reflected a 4 × 4 factorial experimental design. Although exposure to DEHP and/or PCB153 alone increased DNA fragmentation and decreased motility, the scale of dose-related effects varied with the presence and relative concentrations of each chemical (DEHP.PCB interaction for: DNA fragmentation; human p < 0.001, dog p < 0.001; Motility; human p < 0.001, dog p < 0.05). In both human and dog sperm, progressive motility negatively correlated with DNA fragmentation regardless of chemical presence (Human: P < 0.0001, r = −0.36; dog P < 0.0001, r = −0.29). We conclude that DEHP and PCB153, at known tissue concentrations, induce similar effects on human and dog sperm supporting the contention of the dog as a sentinel species for human exposure.

More like this
Mind and Body
7.28.2022 9:19 PM
A deadly disease-causing bacteria was detected in US soil samples — here's what you need to know
By Katie MacBride
Science
8.5.2022 6:00 PM
How is nature connected to well-being? It's complicated, scientists say
By Tara Yarlagadda
Science
8.10.2022 3:27 PM
Climate change may push North America’s forests to a “tipping point”
By Tara Yarlagadda
Related Tags
Share: