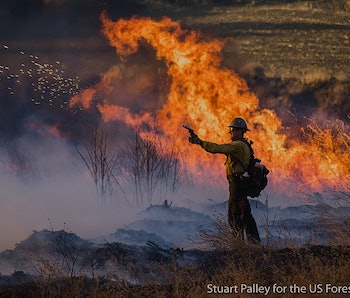 In August, the Mendocino Complex Fire — a behemoth that burned through 450,000 acres — was declared the largest wildfire ever recorded in California’s history. By November, the state’s attention had already turned to a new terror: the Camp Fire, which earned the separate distinction of the state’s deadliest and most destructive wildfire to date. According to a study released Monday, these “megafires” are now the new normal — and they are unlike anything the Earth has seen before.

Scientists explain in the Proceedings of the National Academy of Sciences that, historically, California wildfires are influenced by a high-altitude wind current called the North Pacific Jet Stream (NPJ). This jet stream affects moisture delivery during California’s winters, which in turn influences fire activity the following summer. Wetter winters mean less of a chance of summertime wildfires that spread.

However, the climate models in this new paper show that what was once the norm in California has been turned on its head because of the crucial influence of climate change.

To establish a baseline of how moisture affected forest fire extremes historically, the team reconstructed NPJ characteristics back to the year 1571. They found that before humans became adept at suppressing fires in 1900, dry, high-fire extremes happened when the NPJ was weaker, northward-shifted, and had a wider latitudinal spread. In turn, when the maximal zonal NPJ was stronger, seasons were wetter, making fires less hazardous.

This link between precipitation extremes and NPJ continued through to the 21st century, but the link between NPJ and fire extremes ceased, likely because of advancements in firefighting. However, in recent years wildfires have spread regardless of winter precipitation. The researchers note that recent examples of wet years with high fire activity — like the year the state saw in 2017 — is early evidence of a troubling change.

To look forward, they used climate models designed to forecast the future. And unfortunately, these models demonstrate that this disconnect is likely to continue. Simulations of the summers spread between 2070 and 2100 revealed that, if CO2 levels continue to rise, increasing temperatures will lead to drier summers, reduced snowpack, and an increased fire risk regardless of precipitation levels during the winter. Climate change is linked to these drier, warmer conditions — and the expansion of residential and commercial developments into wildland areas has created new and significant risks to human life in areas that have traditionally experienced brush fires.

“Assuming continuation of current fire management practices, thermodynamic warming is expected to override the dynamical influence of the NPJ on climate-fire relationships controlling fire extremes in California,” the scientists write. “Recent widespread fires in California in association with wet extremes may be early evidence of this change.”

Most climate simulations indicate that California will warm in the 21st century, but the projections for future precipitation patterns have been less certain. This study suggests that there’s “no ecological parallel” for the forest fires of the future because the relationship between fire extremes and winter climate precursors is becoming undone. The data points to a “fundamental reorganization of climate controls” that will “likely promote the incidence of ‘megafires’” — news that doesn’t bode well for the Golden State.

Moisture delivery in California is largely regulated by the strength and position of the North Pacific jet stream (NPJ), winter high-altitude winds that influence regional hydroclimate and forest fire during the following warm season. We use climate model simulations and paleoclimate data to reconstruct winter NPJ characteristics back to 1571 CE to identify the influence of NPJ behavior on moisture and forest fire extremes in California before and during the more recent period of fire suppression. Maximum zonal NPJ velocity is lower and northward shifted and has a larger latitudinal spread during presuppression dry and high-fire extremes. Conversely, maximum zonal NPJ is higher and southward shifted, with narrower latitudinal spread during wet and low-fire extremes. This NPJ, precipitation, and fire associations hold across pre–20th-century socioecological fire regimes, including Native American burning, post-contact disruption, and native population decline, and intensification of forest use during the later 19th century. Precipitation extremes and NPJ behavior remain linked in the 20th and 21st centuries, but fire extremes become uncoupled due to fire suppression after 1900. Simulated future conditions in California include more wet-season moisture as rain (and less as snow), a longer fire season, and higher temperatures, leading to drier fire-season conditions independent of 21st-century precipitation changes. Assuming the continuation of current fire management practices, thermodynamic warming is expected to override the dynamical influence of the NPJ on climate-fire relationships controlling fire extremes in California. Recent widespread fires in California in association with wet extremes may be early evidence of this change.

More like this
Science
8.10.2022 3:27 PM
Climate change may push North America’s forests to a “tipping point”
By Tara Yarlagadda
Mind and Body
8.16.2022 1:30 PM
These 10 common foods have the smallest environmental impact: study
By Jennifer Walter
Science
8.18.2022 2:27 PM
Wastewater can track viruses like Covid-19 — can it do the same for superbugs?
By Allison Parshall
Related Tags
Share: