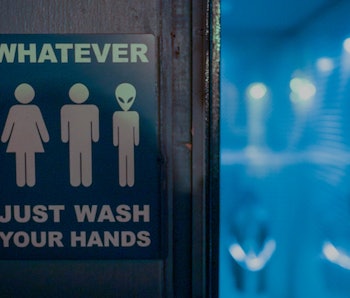 In 1960, four African-American college students walked into a Greensboro, North Carolina Woolworth’s and sat at a whites-only counter. When management asked them to leave, they refused. The next day, more students joined them; then more the next. The student-led sit-ins spread across the southern United States, setting the stage for the Civil Rights movement and the end of segregation in the South.

Today, we venerate the major figures of the U.S. Civil Rights movement, and we regard them as heroes putting their lives at risk to correct an unjust system. But that was not the consensus in 1960, when the sit-ins were “dismissed at first as another college fad of the ‘panty-raid’ variety,” according to a New York Times report. A few years later, when the movement moved north of the Mason Dixon line, a shockingly high number of Americans in both the North and the South condemned it: Sixty percent of Americans in both the North and the South said they disapproved of Martin Luther King, Jr.’s August 1963 March on Washington, believing it would lead to unnecessary violence. When King died in 1968, his disapproval rating was at a stunning 78 percent. It took a long time for many in mainstream politics to change their attitude about King, but now his birthday is an unofficial national day of service and federal holiday.

We tend to revise history to adhere to a simpler narrative: There are villains and heroes, good guys and bad, a right and wrong side of history. But as the history of the response to the Civil Rights movement proves, sometimes our views do not fit so neatly into these narratives.

Sometimes, more of us are on the wrong side of history than we’d like to think. And that will inevitably prove the case for the onging national debate over gender.

Last month, a few weeks before Tuesday’s midterm elections, the New York Times reported that President Donald Trump was considering a proposal to rescind the previous administration’s policy broadening the official view of gender, defining gender solely based on the sex a person was assigned at birth. (Note: “gender” refers to how a person self-identifies; sex refers to the biological sex they were assigned at birth.)

The proposed policy also would make it illegal for anyone to change their gender unless they were subject to genetic testing. The proposal was very much aligned with Trump’s stance on transgender people’s rights, which is to say that he does not believe they have any: His administration has been marked by a disregard for transgender people, from the attempted transgender military ban to rolling back Obama-era protections for LGBT students.

The proposed policy was widely interpreted as an attack on LGBTQ rights and a cynical effort to rally up Trump’s base before the midterms — both of which are probably true.

It is also true that unfortunately, the administration’s views on gender are not too far right of those of the nation at large, but how will our future selves look back on our thoughts today? History tells us we’ll gloss over the collective consternation we face when it comes to the gender debate, just like we did with suffrage, Civil Rights, and same-sex marriage.

Moreover, while we tend to think of our cultural view of sex and gender as neatly split along political ideological lines, the Pew survey indicates that’s not exactly the case. While the majority of Republicans (nearly 80 percent) did indeed say they believed that a person’s gender was the sex they were assigned at birth, 34 percent of Democrats also said they agreed that gender was fixed and unchanging — a minority of liberals, yes, but not a small one. And in a separate Ipsos study, 32 percent of Americans believed that transgenderism was a mental illness.

Clearly, our culture has a long way to go in terms of accepting not only that transgender people are worthy of legal protections, but that their identities are valid — and to a degree, that’s the case on both sides of the political spectrum.

This is all horrifying news — but the tide may be turning faster than we think.

Same-Sex Marriage Was Once This Way

Much like the students who refused to leave the Woolworth’s counter in 1960, LGBT activists at Stonewall are now canonized in American history, to the degree that President Barack Obama (who, let’s not forget, was initially opposed to same-sex marriage) designated that bar in New York City a national monument in 2016. While we still have a long way to go in terms of LGBTQ rights, the next generation will hopefully grow up viewing the opposition to same-sex marriage the same way that we currently view segregation or a ban on same-sex marriage: As an embarrassing and borderline inconceivable stain on our nation’s history. And as trans, genderqueer, genderfluid, and non-binary voices multiply and become louder, the debate over gender will likely follow the same path.

Ej Dickson is a writer in New York and Inverse contributor. A Disney superfan, she’s a mom but not weird about it. Read more of her work at ejdickson.com.

More like this
Science
10 hours ago
Ancient chicken bones and snail shells date the destruction of a Greek city
By Jennifer Walter
Innovation
8.4.2022 11:00 AM
X-Ray study adds to the mystery shrouding shrunken heads’ origins
By Sarah Wells
Culture
8.10.2022 11:30 AM
10 years ago, Jeremy Renner ruined the best spy-thriller franchise of the century
By Adrian Manuel
Related Tags
Share: