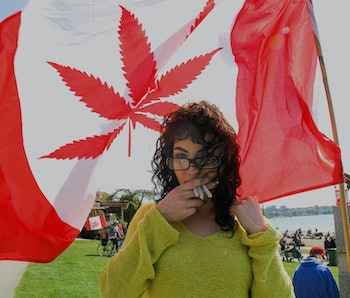 Wednesday, October 17 marks the beginning of full cannabis legalization in Canada, but critics worry it is the beginning of a new, restrictive era some have nicknamed “Prohibition 2.0.” Legalization, they argue, gives the federal government full power over marijuana and the people who don’t comply with the new laws, thus opening the door for even more restrictive drug policies that could harm users.

“It could be more of a Big Brother situation than it’s ever been before,” Andrew Hathaway, Ph.D., tells Inverse. Hathaway, an associate professor of sociology and anthropology at the University of Guelph in Ontario, has spent 25 years researching drug policy and drug culture.

"“It could be more of a Big Brother situation than it’s ever been before."

Canada is the world’s second country, after Uruguay, to make marijuana legal for recreational use. Under the new law, Canadians can grow up to four plants at home, purchase dried flowers (buds) and low-potency oil extracts from federally and provincially regulated retailers, and possess up to 30 grams — a little over an ounce — of pot in public. These specifics, says Hathaway, are where the rules can turn on users.

Decriminalization, he explains, would have removed criminal penalties for getting caught with the drug, but legalization puts Canada’s federal and provincial governments in charge of the marijuana marketplace. Under this system, any seller who doesn’t get with the program — including the many illegal dispensaries currently operating across Canada — could face criminal penalties. Though these dispensaries have operated with relative impunity for some time, the new rules could give law enforcement the motivation to pursue them.

“It definitely sounds more progressive to legalize and regulate, but it’s this regulation part and the impetus to be extra hard on those who aren’t participating in the new legal framework,” says Hathaway. He argues that the new system gives the illusion of freedom but only within a very narrowly defined space. “In an era of legalization, which generally would suggest more progressiveness, it may not work out that way.”

"“Whereabouts is 31 grams arbitrarily good for 14 years in prison, whereas 30 isn’t?"

Hathaway isn’t alone in his views. In April 2017 — 4/20, to be exact — the organizers of a marijuana legalization march slammed the proposed legislation, calling it “Prohibition 2.0.”

“Whereabouts is 31 grams arbitrarily good for 14 years in prison, whereas 30 isn’t?” one of the organizers challenged reporters, according to Canada’s Global News. “Thirty-one grams isn’t going to kill me any more than 30 is, or anybody else on the planet, so there’s a complete lack of clarity.”

The success of legalization in Canada, predicts Hathaway, will largely depend on the ability of new government-regulated retailers to compete with the illicit market, which most users have depended on for a long time. If the new legal businesses can’t meet or exceed the expectations that people have grown to expect from their dealers, then they may not have much incentive to migrate to the legal market.

“They would have to do a very good job in terms of quality and price,” he says. “The suggestion that [legalization is] going to do away with the illicit market brings an added sense of scrutiny.” In other words, the Canadian government’s focus on eliminating the illicit marijuana market raises some eyebrows. Much of the public discussion leading up to legalization has focused on keeping marijuana out of the hands of young people and taking the market away from organized crime, which Hathaway perceives as a less-than-forthright justification for the Canadian government to get its hands into the marijuana business. And in doing so, it will be creating a new class of criminal:

“Anybody who still purchases from their illicit source of supply is technically a criminal because they’re not cooperating with the regulated market,” Hathaway points out.

In addition to concerns over the government’s role in regulating retailers, legalization also raises new opportunities for users to be punished for driving under the influence.

“Those who have driven having used cannabis, either recently or not so recently, could potentially be subject to enhanced scrutiny,” Hathaway says. “I suspect it’s going to lead to a logjam of cases going forward.” Given the infant state of pot breathalyzers, this scrutiny could include the recruitment and training of so-called drug recognition officers who are knowledgeable in the art of determining whether someone is high — as opposed to an actual scientific test.

All in all, though, Hathaway is hopeful.

“None of this is to suggest there isn’t a need for significant law reform,” he says. Having watched marijuana legalization take shape over the years and finally come into existence, Hathaway is watchfully waiting to see what it ends up looking like in practice.

“It’s kind of odd to be in the position of something I’ve always argued for, as somebody arguing for progressive law reform, to end up sounding like a naysayer, but I’m just keeping an ear to the ground.”

More like this
Science
8.3.2022 3:44 PM
Ground-breaking technology restores dead organs back to a life-like state
By Miriam Fauzia
Mind and Body
10 hours ago
Neuroscientists finally figured out why thinking can be so exhausting
By Elana Spivack
Science
12 hours ago
South Korea just launched a rocket to orbit the Moon, a first for the country
By Nancy Atkinson and Universe Today
Related Tags
Share: