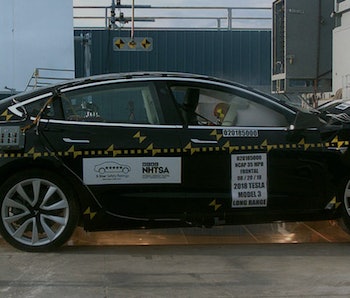 Tesla released its first vehicle safety report on Thursday, and it shows top results when compared to the national average. The automaker decided earlier this year to regularly publish its safety data, constructing a telemetry stream to create a uniform process. The new publication is the first result of the initiative.

In the third quarter of this year, Tesla registered one accident or crash-like event every 3.34 million miles for situations where the driver was using the semi-autonomous Autopilot mode. A “crash-like event” also covers situations like near misses. For situations where Autopilot was disengaged, the company registered such an event once every 1.92 million miles. For comparison, the National Highway Traffic Safety Administration registers a crash for every 492,000 miles, a figure that excludes “crash-like events.” The figures add to Tesla’s high record of safety, receiving a five-star rating in all categories from the NHTSA last month for the Model 3.

Tesla notes that this data is possible due to the connected nature of its fleet: “Because every Tesla is connected, in most instances we are able to learn immediately when a Tesla vehicle has been involved in a crash. Additionally, our non-traditional sales model allows us to have a direct relationship with our customers for the lifecycle of ownership, providing an avenue for us to supplement our records and gain even more insight as needed. In contrast, automakers whose cars aren’t connected and who utilize networks of third-party franchised dealers may never know when a vehicle is involved in an accident.”

Not everyone is impressed with the new reports. Describing the report as “short on details,” The Verge noted that the post omitted data around Autopilot disengagement rates, which say how many times a human driver took over from the computer every mile. It’s important to note that Autopilot is not sold as a fully autonomous solution, though. Tesla has been working to roll out fully autonomous driving, but with the launch of Autopilot V9 this week it omitted a new Autopilot-based navigation feature to allow for more development time.

Tesla has proposed that it will continue releasing its safety report figures on a quarterly basis.