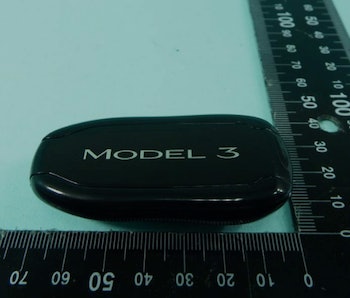 The Tesla Model 3 is getting a key fob, and it could stop electric car owners worrying about their smartphone charge. The little gadget, detailed by the Federal Communications Commission in filings this week, offers three buttons that unlock the doors, trunk and the front side “frunk.”

The new filing is good news for those that prefer a more traditional method of unlocking their car. Before now, ever since the Model 3 entered production in July 2017, Tesla has offered either a key card or smartphone for vehicle unlocks. The car will unlock when it detects a registered phone’s Bluetooth signal nearby, locking again when the user steps away. The app also enables users to remotely start the car, check charging status, lock, unlock and more from a distance. Tesla also bundles a key card for when the smartphone is out of battery, enabling users to swipe over the door pillar to unlock. A key fob ends the hassle of worrying about whether the smartphone is fully charged, while also providing the convenience of remote locking and unlocking.

The fob will be welcome news for users struggling with the smartphone app. Electrek notes that the app can be temperamental, with the Bluetooth connection sometimes not working as expected and leaving owners fumbling for their device and unlocking their phone first. The Model S and X both offer key fobs, which means the release will bring the Model 3 in line with the company’s other vehicles.

The news comes in a good week for the Model 3. The National Highway Traffic Safety Administration announced on Thursday that the vehicle scored full marks in its safety tests, continuing the trend from the Model S and X. CEO Elon Musk likened the vehicle’s physics to that of an ice skater, who moves their arms in and out to control the speed of turn. Tesla’s vehicles place the batteries underneath the car, placing heavy components close to the center of gravity.

The NHTSA is expected to release further details about its safety tests in the coming weeks. The key fob has no firm public release date, but with the FCC filing, a launch could arrive sooner rather than later.