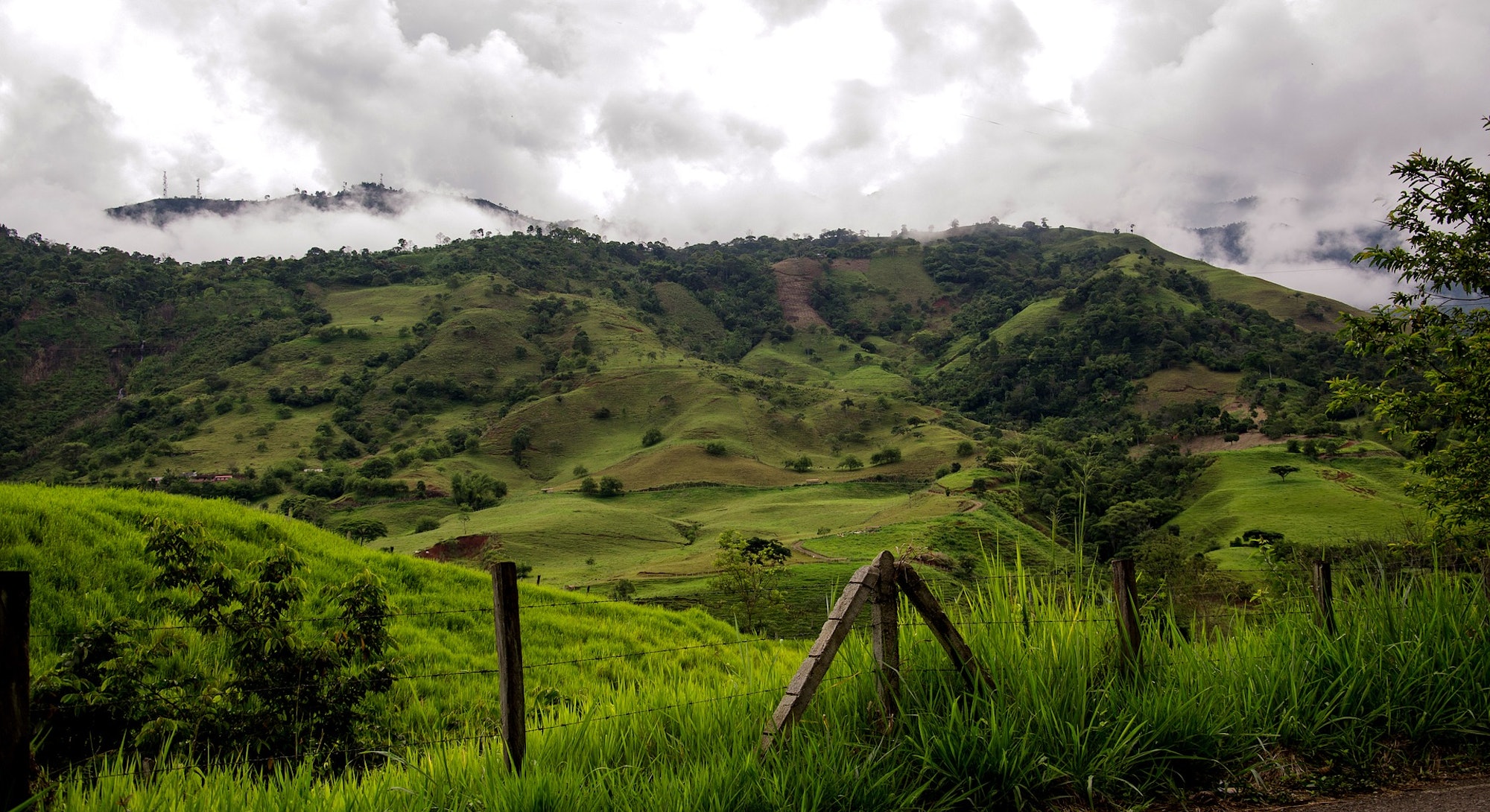 In Colombia’s coffee-producing region of Risaralda, small trees run along the sharp incline of the Andes Mountains, carefully tended in tidy rows. Thousands of green coffee berries turn brilliant red as they ripen, ready to be harvested by hand. The steep hills here prevent mechanized techniques.

Its unique geography makes Colombia one of the world’s greatest coffee-producing nations, selling $2.64 billion of mild, high-altitude Arabica beans to countries around the world each year. Only Brazil and Vietnam export more coffee.

Despite their global reach, coffee farms in Colombia are generally family-owned and modest in size — perhaps 5 to 12 acres.

These fertile mountains already face weather-related risks, such as mudslides and erosion. Now, the country’s coffee region is increasingly vulnerable to climate change-induced disasters like flooding, drought, and invasive pests.

Farmers See the Changes Around Them

Our research team went to Colombia in early 2018 to talk with the coffee farmers of Risaralda about how they are adapting to climate change.

The results were stark.

Over 90 percent of the coffee farmers reported changes in average temperature. Seventy-four percent said droughts had gotten longer and worse, and 61 percent reported an increase in mountainside erosion and landslides because of more rain.

These changes have created uncertainty about previously routine farming decisions.

Because the planting and harvesting seasons are no longer regular or predictable, for example, many farmers cannot rely on traditional seasonal indicators to guide them about the right time to plant, harvest or tend to their coffee crops.

Organizing labor to pick the coffee beans has also become a struggle because the trees often do not flower at the same time due to unstable seasonal conditions. New Colombian labor laws meant to decrease child labor make finding farmhands difficult, compounding the problem.

In short, the farmers saw climate change as nothing less than an existential threat.

“Our ability to counteract the effects of climate change is minimal,” one farmer told us. “It is a threat capable of greatly incapacitating us. So we must be very attentive to the little we can do to mitigate.”

From 2008 to 2013, Colombia’s coffee production dropped approximately 33 percent due to the El Niño and La Niña inclement weather patterns, when rains, clouds and hot spells all increased.

The country has worked to increase its production since then, and this year Colombian coffee farmers are expected to produce 13.3 million bags of coffee beans — roughly 1.8 billion pounds — up about 23 percent from 2013 levels.

But they’re still short of the national production goals of 14.7 million bags, a shortfall the Colombian National Coffee Federation has attributed to excessive rain and cloudiness.

Even before climate change endangered their crop, Colombian coffee farmers were already operating on a very slim profit margin.

Most producers sell their coffee to the Colombian National Coffee Federation, a nonprofit cooperative founded in 1927 to represent Colombia’s coffee farmers nationally and internationally. It values Colombia’s coffee exports using a price scale tied to the New York Stock Exchange.

Since that price fluctuates daily, it is difficult to calculate an individual farmer’s exact income or losses, but most small farmers in Colombia barely break even.

Under such circumstances, even one crop failure can devastate the family farm.

To adapt to Colombia’s changing climate, some farmers have begun experimenting with new farming techniques they think might help offset its impacts.

Roughly one-third of the farmers we interviewed had planted trees on their farms to shade coffee plants during hot spells and to prevent soil erosion during big storms. Others were building water tanks to collect rainwater during droughts.

Some coffee farmers had also diversified their crops, adding banana and avocado trees to their farms to reduce the risks of any one crop’s failed harvest.

But fully one-third of all the coffee producers we spoke with — 14 of our interviewees — are still farming as their families have for centuries.

They’re not unconcerned about the environmental changes affecting their farms. Yet time pressures and lack of resources give them little choice but to focus on short-term demands like making payroll, paying debts and keeping food on the table.

Climate-related production challenges are a concern not just for the farmers we interviewed but also for Colombia’s economy.

Coffee is the South American country’s most important agricultural export, representing 31 percent of all agricultural trade. The industry is worth around $1.97 billion a year and employs an estimated 800,000 people.

Other developing countries where the coffee industry is being hit hard by climate change, such as Brazil and Tanzania, have tried some successful adaptation strategies. These include introducing new varieties of coffee beans, improving soil and water management and increasing access to loans and other financial services to help farmers weather failed crops or invest in new technologies.

Research shows that teaching people to farm in a new and unpredictable environment requires a detailed understanding of how a given population is vulnerable to climate change now and in the future. That means asking farmers what they think and feel about what’s happening to design contingency plans that will actually work for them.

That was the work we began to do in Risaralda. We hope our findings can help the Colombian government work with farmers to help them adapt their farming practices for a future of more extreme, unpredictable weather.

Farming in the face of climate change involves grappling with many complicated economic, informational, labor, and business problems. Colombian coffee farmers want to succeed, but they’ll need help in all of these areas just to survive.

This article was originally published on The Conversation by Jessica Eise and Natalie White. Read the original article here.