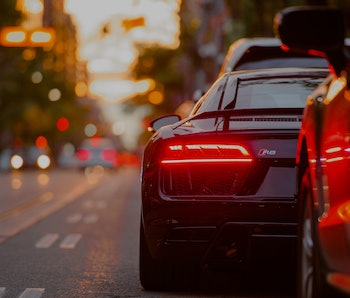 Apple received a patent Tuesday for an autonomous car system that informs other road users about the vehicle’s current actions. The company, which has been sort-of-quietly working on a self-driving system, details a display that could sit on the exterior of the car, working with GPS directions and other information to provide a clearer picture of how the vehicle will act next.

The patent comes as autonomous carmakers grapple with the unpredictable nature of humans and how they use roads. Researcher Andrew Ng told Bloomberg last week that autonomous cars could require stricter rules on jaywalking to avoid accidents, perhaps even though pedestrian-free streets, a stance criticized by New York University professor Gary Marcus as “just redefining the goalposts to make the job easier.” Apple’s system could provide information to others like how many seconds until the car takes a left turn, how many seconds before it stops, and even if it’s received information about an upcoming obstruction.

It’s a smart move, particularly as cars are already designed to relay information to other road users through turning blinkers, stop and reverse signals. Larger vehicles like trucks use loud beeps to indicate reversing. Apple’s system bears similarities to that of Drive.ai, an autonomous car startup that showed in August 2016 how cars could display information to other road users with a sign on top of the car, like telling pedestrians when it’s safe to cross.

“Providing indications of the operation of the autonomous vehicle aids other drivers and pedestrians in anticipating the movement of the autonomous vehicle and, ultimately, makes such observers more comfortable with the presence of the autonomous vehicles on the roads,” Apple wrote in its patent application. However, it may take more than signs to change behavior: roboticists at Duke University found in 2016 that current pedestrians seemed to ignore autonomous car signs in tests, instead relying on guessing a car’s speed and crossing based on intuition. The researchers also noted that such signs would need letters six inches tall and four inches wide to prove visible from 100 feet away.

It’s unclear whether Apple’s project will result in a full-fledged car or a technology for third parties. TF International Securities analyst Ming-Chi Kuo claimed last week that Apple will release a car, it will launch between 2023 and 2025, and it will use augmented reality to set itself apart.

Another option is to invest in Tesla and employ the technology in the currently-shipping cars — an idea floated this week by Tesla investor Ross Gerber.