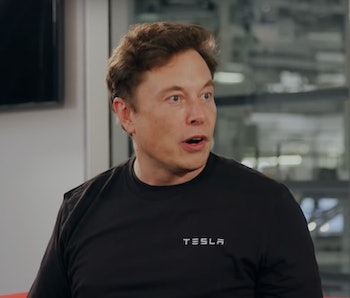 The second-generation Tesla Roadster is already impressive, but it could get even better prior to launch. CEO Elon Musk claimed in a Friday interview with YouTuber Marques Brownlee — also known as “MKBHD” — that the $200,000 luxury car, set to hit roads in 2020, could improve on the prototype unveiled at the Tesla Design Studio in November 2017.

Brownlee, noting that the specs are “insane, ludicrous,” asked Musk if the car would improve prior to launch. One of the car’s most impressive stats, beyond its 0-60 mph acceleration of 1.9 seconds, is its 200-kilowatt-hour battery providing a range over 600 miles. Musk explained that the battery is essentially two 100 kilowatt-hour Model S P100 packs, but Tesla can double the modules without doubling packaging and other components, leading to only an 80 percent increase in pack volume equating to a 4-5 inch rise in height. Musk claimed that prior to launch, Tesla may be able to achieve an efficiency saving on these figures of “at least 10, maybe 20 percent.”

See more: Here’s How Much the Next-Gen Tesla Roadster Will Cost You

Musk compared the potential improvements in manufacturing technology to that of computer components, explaining that “when they come out with a new graphics card or CPU…initially it’s expensive, but then over time that price drops down.” Then there’s the question of processes, which Musk boiled down to a question of “do you have automation or people? We have both,” describing Tesla’s operations as an “integrated cyborg thing.” The man constraint, Musk said, is the struggle of hiring enough people.

Musk has teased improvements to the Roadster after launch before. Musk told shareholders at the annual June meeting that the car will have a SpaceX options package, following his claims that the car may be able to fly. Emile Bouret, one of the few to drive the 2020 Roadster, also claimed that the released specs may prove a “conservative” estimate.

Before the Roadster launch, Tesla has a number of other vehicles in the works. These include a Model Y cheaper sports utility vehicle, set for tentative launch next March, and a Semi truck that could hit roads as early as next year.

After the Roadster hits, Musk may even consider a $25,000 electric car that’s even cheaper than the Model 3.