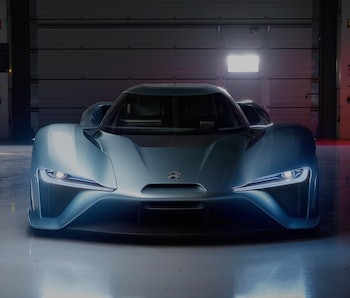 Electric car maker Nio filed plans on Tuesday for an initial public offering on the New York Stock Exchange, just as rival Tesla plans to exit the stock markets. The two firms share some similarities, but there’s some key differences in their output that sets them apart.

Nio is a China-based rival to Tesla founded in November 2014 under the name NextCar, changing to its current name in July 2017. The Chinese firm backed by big names like Tencent and Baidu plans to raise $1.8 billion in its initial offering. It has a lot going for it, having made a name for itself in the world’s largest electric vehicle market where Tesla has stumbled. Tesla is planning to change that with the Shanghai Gigafactory, but Nio has a strong head start.

Nio has produced two electric cars, showcased one concept vehicle, and plans another for future production.

The NIO EP9 was introduced in October 2016 with a staggering top speed of 196 mph. Four separate motors and gearboxes helped earn it the accolade of world’s fastest electric vehicle. It has a range of 256 miles, charging time of 45 minutes, and acceleration from 0 to 124 mph in 7.1 seconds. It claimed a record autonomous driving time of 40.33 seconds around the Circuit of the Americas race track in Austin, Texas, in February 2017, and a lap record of six minutes 45.9 seconds on Germany’s legendary Nürburgring in May 2017.

The ES8 is the first volume manufactured vehicle, unveiled in December 2017. It’s a seven-seater aluminum vehicle that offers speeds of 0 to 60 mph in just 4.4 seconds, thanks to a drag coefficient of 0.29. The battery offers a New European Driving Cycle of 220 miles and total range of 310 miles. The vehicle is available at a price of RMB 448,000 ($65,000) before subsidies.

Beyond these two, Nio has also produced a concept car called Eve that demonstrates the autonomous system’s future potential.

Nio also plans to launch the five-seater ES6 by the end of this year, with deliveries starting in the second half of next year, with a lower price than the ES8.

Tesla Vs Nio. Which Is Bigger?

In terms of size, it’s almost no comparison. Nio only started shipping the ES8 in June, and as of July 31 it had delivered 481 cars. The company claims it has a backlog of 17,000 orders. The firm made $6.9 million revenue at the end of June, but lost $502 million in the first half of this year and $759 million in the previous year.

Tesla, on the other hand, is much larger. In its second quarter ending in July, the company reported $4 billion in revenue and a total loss of $520 million. In total, the firm has delivered over 360,000 vehicles, as highlighted in this recent chart:

The company has so far announced three new vehicles set to hit the roads over the coming years. The Model Y is a cheaper sports utility vehicle, tentatively scheduled for an unveiling in March next year. The $150,000 Semi truck is an industry-focused vehicle that can run for 300 or 500 miles, set to hit roads next year. The $200,000 second-generation Roadster is a sporty followup to the company’s first car offers a staggering 0-60 mph speed of 1.9 seconds, and achieves a top speed of over 250 mph, set to hit roads in 2020.

Tesla Vs. Nio: How the Business Models Differ

Tesla’s model is relatively straightforward. You go to the store or shop online, buy the car from Tesla, and it’s yours. Tesla also offers financing options that space the cost out over many years. Tesla also offers charging through its proprietary supercharger network, with 1,327 stations offering 10,854 charging points worldwide, capable of offering 120 kilowatts to mostly charge a Tesla in under half an hour.

Nio is slightly different. It offers mobile sales through an app, which doubles up as an online platform. The firm also operates Nio Houses that act as both showrooms and clubhouses, aimed at fostering an online community and maintaining contact.

Without Tesla’s investments in infrastructure, Nio has opted for a different approach to cut charging times. Its Power Swap service physically switches out the internal battery — an approach dismissed by Musk — while a mobile charging service visits users to top their cars up if needed. Nio can also access China’s national charging network, 59.6 percent of which are classified as “superchargers.”

It’s hard to say how the next few years will play out, but it’s safe to say Nio’s approach is intriguing to say the least.