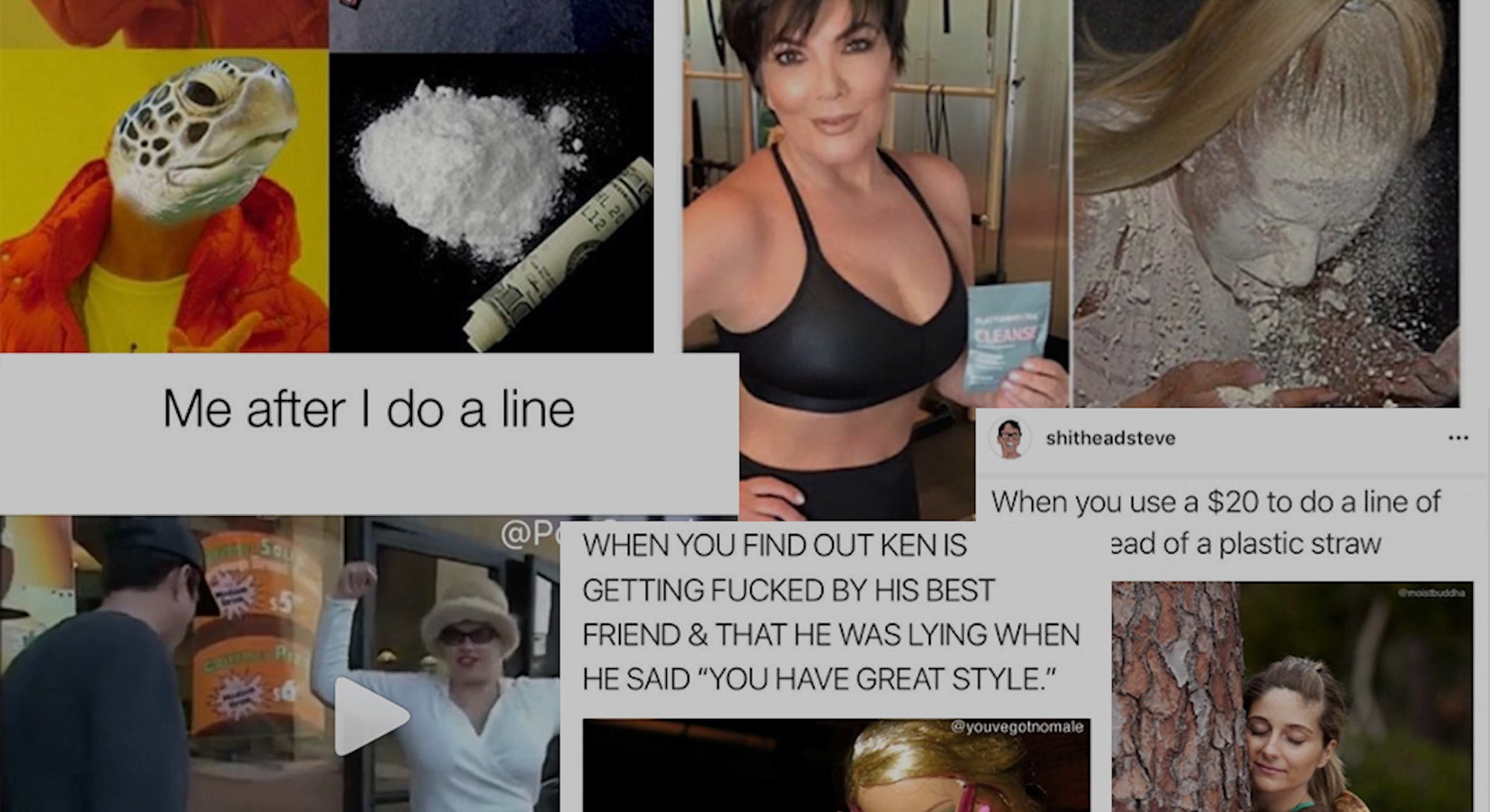 Cocaine: It’s a hell of a drug, according to Rick James, and apparently, Instagram users think so, too.

Hard drug memes on the platform are spreading like wildfire, with some of Instagram’s most popular personalities posting memes about drugs like cocaine and ketamine that elicit hundreds of thousands of likes.

Meme-star Shitheadsteve, who has 2.6 million followers, reposted a cocaine meme in July that garnered over 72,898 likes and 1,977 comments in less than two weeks.

For those who don’t consume hard drugs, the popularity of the memes may be shocking given the taboo status of drugs like cocaine, which is criticized for its real potential for addiction along with its environmental and humanitarian consequences. But could the internet trend actually be reflecting a cultural shift in attitudes towards hard drugs?

Sebastian Tribbie, known as youvegotnomale on Instagram, is perhaps the reigning king of hard drug memes. With over 66,300 followers, Tribbie, who is a staple in the New York City nightlife scene, frequently posts about cocaine, Xanax, and ketamine, with 15 percent of his posts over a three-day sampling in July relating to hard drug use.

Tribbie, who says drug memes “never do bad” in terms of traffic, tells Inverse that the popularity of drug memes can be attributed to shifting norms around substance use: “I think drug memes are for millennials. I mean, on the show Girls the main characters did cocaine, and 2 Broke Girls makes countless jokes about hard drugs like coke and Molly … I think the drug stigma has gone way down … millennials are very open to trying new things.”

Judging by Tribbie’s following, he may be right. Everyone from Rose McGowen (who is currently facing cocaine possession charges) to progressive activist and media personality Bridget Todd have liked and commented on Tribbie’s drug posts, with Todd writing, “would never share but totally agree” on a post that reads, “Anyone who says they don’t like cocaine is a pussy.”

Jeff Epstein, who goes by PopGoggles and is one of Tribbie’s favorite memers, frequently makes content about cocaine and Adderall despite his claim that he himself is a sober, recovering addict. Unlike Tribbie, Epstein thinks drug memes simply provide a relatable outlet for those who are already doing hard drugs but may have previously remained silent because of cultural taboos. In an email, he told Inverse: “I actually think they’re relatively universal. What’s funny is that people from all cultures, demographics, and economic standpoints relate to them. Some people are just more open about it. I get so many DM’s from people with respectable jobs or public jobs that say they love them but can’t like or comment because they don’t want others to see.”

Epstein says that out of all of his memes, he receives the most DMs about the ones tackling drugs, but he doesn’t view them as a catalyst for drug culture, saying “these are all just fun stories and are to be taken in jest.”

The popularity of drug memes may seem out of step with cultural taboos, but data from the US Substance Abuse and Mental Health Services Administration suggests that more people in the United States are using cocaine, which would explain more liberal attitudes towards, or at least understanding of, the drug.

Those increases don’t appear to be random. According to the State Department, 2015 coca production in Colombia was double what it was in 2011, being produced on 159,000 hectares of land. In 2018, the US estimates that that number has grown to 188,000 hectares. The increase can be tied to Colombia’s decision to stop the aerial eradication of coca fields over environmental concerns in 2015. Now, under pressure from the US, Colombia is considering using drones to restart the program.

The numbers, along with the fact the 97 percent of cocaine seized in the US comes from Colombia, according to the DEA, suggest more people have begun using cocaine in the states because there is more supply.

The two rising trends could pose an interesting problem for the US government, which has heavily regulated cocaine since 1914. As supply and use rises, so too does consumption of media surrounding the drug.

Despite the potential for influence on addicts or potential users, the memers I talked to all said that criticism is overblown. Tribbie said, “I know humor spreads the info universally and everyone has dealt with drugs in their own way. People will always have opinions and believe what they want to believe me. What’s worse a hard drug meme or a song about hard drugs?”

Memer Nite Ryda, whose dynastyatdusk account has 54,700 followers, also raised the point of comparing evils, saying, “I think that critics need to worry about the state our country is in and how we are turning into a real-life Handmaid’s Tale instead of worrying about a joke on the internet.”