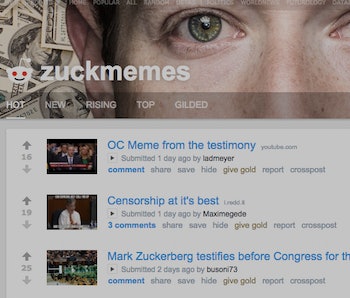 Mark Zuckerberg’s painfully awkward testimony in front of Congress on Tuesday and Wednesday inspired the internet to search for comic relief amidst the harsh reality of the social media platform’s bad practices. And according to Reddit, the fastest growing subreddit on Thursday was r/zuckmemes — a place that is exactly what it sounds like.

R/zuckmemes was created six months ago after this meme posted in Reddit’s premier meme community, r/MemeEconomy, provided the right inspiration to branch out.

Tuesday and Wednesday’s testimonies provided a predictably sharp increase in posts in r/zuckmemes, spurred by everything from the Facebook CEO’s wooden demeanor during questioning, to the revelation that the billionaire was sitting on a four-inch cushion, since referred to as Zuckerberg’s booster seat.

At time of writing, the relatively freshman subreddit had 25,933 users and had achieved a 15.37 percent spike in growth over the past 24 hours, according to Redditlist, which tracks user data from all over the site.

Also the name “Mark” inspired some people to be clever; this gem showed up on r/zuckmemes:

Zuckerberg’s testimony might be over, but he’s definitely not out of the hot seat, as Facebook will continue to combat its issues with safeguarding privacy. As the social media platform and its CEO remain in the news in the coming weeks, this subreddit will probably continue to grow.

More like this
Science
14 hours ago
Webb Telescope discovers an “amazing” galaxy from the edge of time
By LAURENCE TOGNETTI and Universe Today
Culture
13 hours ago
Nichelle Nichols’ legacy was so much bigger than her Star Trek kiss
By Matthew Delmont and The Conversation
Mind and Body
15 hours ago
Nordic Diet vs. Mediterranean Diet: The health benefits of eating like a Viking, explained
By Duane Mellor, Ekavi Georgousopoulou and The Conversation
Related Tags
Share: