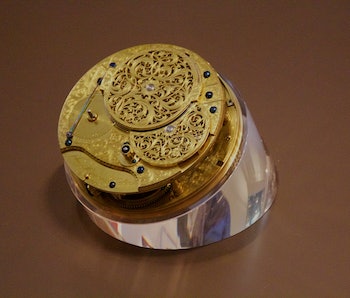 Google on Tuesday celebrated the life of British horologist John Harrison, a man whose inventions helped shape clockmaking and navigation for years to come. While most famous for his creation of a device to measure longitude at sea, some of his greatest breakthroughs came from the journey to develop this machine.

Harrison spent decades trying to answer the call from the Board of Longitude, established in 1714, that offered £20,000 (around $5,000,000 today) to anyone who could find a way to measure longitude on boats. This was critical for avoiding ocean rocks: While understanding latitude is as simple as looking up at the sky, longitude was much tougher. Almost 2,000 sailors lost their lives in the Scilly naval disaster of 1707, spurring the creation of the board. In his quest to win the prize, Harrison made some fascinating creations along the way.

Here are five of Harrison’s best-known inventions, including the one for which he’s now famous.

This clock, known as H1, was built between 1730 and 1735 and is described by the Royal Museums Greenwich as “the first relatively successful marine timekeeper of any kind.” The clock enabled ships to depend on time as a measure of longitude, as they could compare a fixed time to the stars and use it to work out how far from their starting point they had moved.

This pendulum was key to helping ships maintain constant time. It was invented in 1726 and used alternating brass and iron rods that would counteract each other as temperatures changed. The design depends on two different metals that change temperature at varying rates. In the diagram below, B shows an iron rod in blue paired with yellow zinc rods at regular temperature, while C shows them at higher temperatures.

The gridiron keeps the pendulum swinging at the same length, maintaining accurate time.

For his second clock called H2, built between 1737 and 1739, Harrison used a spring remontoire to ensure accuracy by evening out quirks in the gear train’s movements. Harrison didn’t invent the remontoire, but he was credited with its perfection. In a 1935 lecture describing its use in H3, commander Rupert Gould described it as “the only mechanically perfect remontoire I have ever met with.”

This mechanism, invented by Harrison in 1722, was critical to his first three watches. The mechanism consists of two pallets operated by a pendulum. As it swings, it moves the pallet a fixed amount, almost jumping with each push. The movement helps regulate the speed at which the clock hands move, and its accuracy was pivotal to Harrison claiming his prize.

Also known as H4, Harrison started work on this watch after a watchmaker called John Jefferys produced a pocket watch to his specifications in 1753. Improving the pocket watch was a side project, but the Jefferys watch made him realize it could improve the longitudinal device. Harrison started work in 1755 and finished four years later. The result was a culmination of a lifetime’s work, a portable device that finally solved the question of longitude.